My knee was almost pain-free on Sunday morning, but it was also very, very stiff.  I was hobbling around like a peg-legged pirate getting Murray ready.  I don’t think I’ve mentioned this lately (it’s probably worth its own post) but Murray has made huge strides in tacking up lately.  At shows he’s been downright normal — it takes me five minutes to tack him up, and boy is that nice compared to 25 minutes.

Unfortunately for me, my knee was not holding up as well in the saddle as it had on Saturday.  Posting was a little painful (though the pain decreased as I rode), and I had a distinct feeling of unsteadiness in my two point.  Murray was a little sleepy feeling, but perked up when we started jumping.  I was back to riding like a juggalo, and leaned and kicked and crammed Murray to a couple of awful spots.  At one point I leaned and took my legs off to an oxer and Murray came to a gentle stop in front of the fence.  I turned to B and made excuses for myself, namely “my knee is really fucked right now.”

“This is when you have to really ride perfectly then,” she responded. “Dig deep. Don’t think about it.”

ugh I just ❤ him so much

I came back around to the oxer and pointedly did not get ahead and kept my leg on, and Murray was more than happy to comply.  I stopped warming up after that, hoping to save both Murray and myself for the actual stadium round, and did some meditative deep breathing to put the pain out of my mind.  I had walked the course the evening before, and given the state of my knee I wasn’t about to walk it again.  B walked it separately and we had a little pow-wow on the strategy for the fences.  I told her I was planning to try to square out my turn between 2 and 3 to avoid a weird curvy line, but she said it wouldn’t be too bad to bend as long as we didn’t drift.  She told me not to rush the turn to fence 5 and let myself take my time to get there, and to take the outside turn from 8 to 9, not the (tempting if I had been feeling better) inside turn.  Otherwise, it was a sweeping, fun course that felt a little oddly familiar.

It’s no secret that Murray and I have struggled a lot with stadium (also in general).  We have had bouts of mystery stops, major problems with distraction, spookiness, being afraid of standards, not even making it to stadium because we got eliminated… you name a stadium problem, and we’ve probably had it.  And I’ve spent a not-insignificant amount of time watching people cruise around stadium courses with horses that seem like they are going no matter what.  You know the horse — the rider can be flapping and flopping and not riding at all, and yet nothing short of an unseasonal hurricane would stop them from jumping the next fence.  I have longed for that horse.  While I’m flopping and flapping and kicking and pushing and kissing and coaxing, I have wondered many times why I do not have that horse.

On Sunday, I had that horse.

Murray was a little looky when we entered the stadium arena, and I struggled to get him into a canter to the first fence because he was staring at everything.  I gave him a little precautionary tap on the shoulder as we approached, and Murray was right there for the fence.  We had a big sweeping rollback to the oxer for two, and once again, Murray was on top of it.  The line to 3 could have been more square, but Murray locked onto the fence and took me there.  There was another big sweeping turn to 4AB, and not only did Murray see the fence and go there, but he took the long spot into the combination and made the two inside the combo. 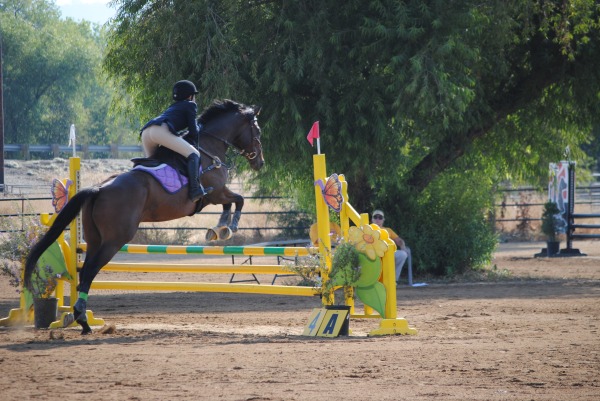 The turn to five was good, but after fence five I couldn’t seem to get my body back under control.  I couldn’t get my right knee to bend so I could get my butt back down toward the saddle, so I was left awkwardly hanging on Murray’s mouth as we made the turn to six.  This directly caused Murray to take six down, since I was hovering over his withers, and he got deep deep deep to the fence.

murray: I can’t can’t jump good when you are crooked and perchy!

No matter, he recovered amazingly and powered up to seven in the five strides it measured.

We had a very Murray approach to fence 8, the first one with strange/scary fill and the dreaded sharkstooth fence.  I managed to keep my body under control and my leg on, so even though we got deep we got over it, and left it up.

taking the deep one

The rollback to 8 yielded the fantastic jump near the top of this post (american flag fence), and then we gunned it home over the knights oxer. 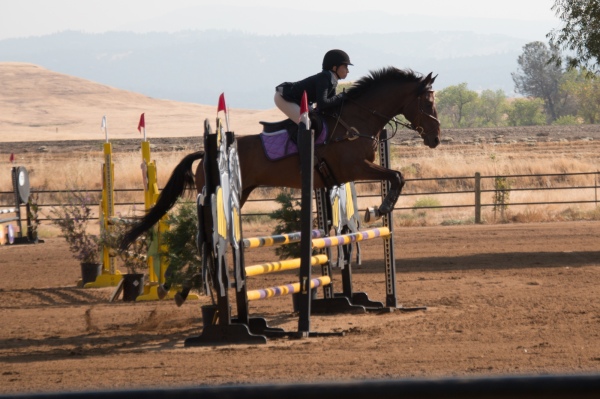 Blurry stadium video below!  I need to clean my phone camera lens.

I’m not going to pretend that the ribbon doesn’t matter to me — I’m glad I got to take home some satin, because I’m a money-grubbing whore and #swag.  But the ribbon really was just icing.  For a move-up show that looked like it could go pretty spectacularly shittily on Friday evening, there wasn’t a single thing I would have changed about the weekend (er, except spraining my knee).

I have been working and waiting four years for this ride.  To feel like this is a partnership we are both committed to, where we can complement and improve one another.  To know that I’m not bullying and forcing my horse into something he actively dislikes and barely tolerates because it’s what I want to do.

I wasn’t all there this weekend, and Murray stepped in to make up the difference (again, actually).  And he did it at a new height, avoiding the problems we’ve had before.  I feel like we could do anything together if we just put our minds to it.

I don’t know where we are going from here.  But wherever it is, I know we can do it.