“Now, here, you see, it takes all the running you can do, to keep in the same place.” – Lewis Carroll

TFW you find your new horsie soulmate but he's too tall for you and generally uninterested . . . #danteelefante

Do you ever feel like you’re working flat out, as hard as you possibly can, and just barely keeping up with the bare minimum of what needs to get done? The last two months — three months? — have been an absolute blur. Shit, it’s not even two full months. I got to ride a grand total of three times in May. THREE. And so far in June I’m also up to a whopping three.

At the end of April, I packed up the truck and headed down to California to prep for the May Horse Trials at WSS. Our show was on May 11th, but I committed two full weeks of work down there to get things ready. And it was a good thing I had the time — because of the late rains in California this year, the entire team worked around the clock to get the footing and arenas ready for the coming show and we just  made it. Like by the skin of our teeth.

actual depiction of me when forced to paint cross country fences

And then because I was distracted by a billion things during the show, I somehow managed to lose a signed-but-not-yet-scored dressage test. FOR FIVE HOURS. AT A ONE DAY. Right as the riders were about to riot for their scores one of my team members found the dressage test, on the legal size clipboard with all the orders of go attached, in the horse ambulance out on cross country. How fucking embarrassing. (And talk about where bad dressage tests go to die.)

But we pulled it off. And I finally got to sleep after that.

I got to come home for a lovely two weeks, and then back to Cali it was for beach time in San Diego! Because my friends are the best, they encouraged me to crash Kate’s barn for a few days, where I watched lessons, took lessons, and ate tacos and salad pizza. (Yes, salad pizza. It’s a thing they sell at Mod Pizza. It’s shockingly amazing.)

We also went on the world’s most gorgeous trail ride. I want to go back RIGHT NOW.

I thought that the June show would be a breeze to prep for compared to May. After working from 7 am to 10 pm (or longer) for 15 straight days, how many more hours could I put in? Especially in a much hotter month when the hours from 3-7 pm are pretty much unbearable on a tractor or in the sun.

After watching the sun set @woodlandstallionstation the last few days, my goal today was to catch it rising. I didn't quite make it today, but I have a few more days to do it.

A lot more, it turns out. I tried to enact a bimodal sleeping plan where I would get to work at 5:30 am, work until 1 pm or so, nap from 2-5, then get back to work from 6-midnight. But instead of napping from 2-5 I just ended up working in a building with air conditioning. So I just cut down on my sleep to an ABSURDLY small amount (for me — I am a 9 hours a night kinda girl) and became sliiiightly manic in response.

BUT it absolutely paid off. EVERY possibly aspect of our June HT was better than the May HT. Even with me majorly fucking up a portion of the footing on cross country at the 11th hour (literally the Thursday before), we ran a MUCH better show, with way better footing, and a way better competitor experience.

All the while, I was remotely managing the team at home to get 8000 hazelnut trees planted and the irrigation put in for them. I mean, my partner helped a lot obviously, since he was there. But let me tell you, a kinda hinky irrigation system for 8000 trees does NOT present you with a small number or problems to solve. And we have 4000 more plants to get in the ground this month, ifyoucanfuckingbelieveit.

I’m honestly a little scared of what’s in store for me before the August show. Our team has been mashing so hard on improvements to the facility, courses, fences, amenities, rider experience…. basically everything. I know there’s still a long way to go before we measure up to one of the big venues like Woodside or Twin, but as a new and growing venue, we are turning into a really cool place. We are ambitious, and it seems like we keep conquering these semi-insurmountable goals by working together. I just know there’s going to be some kinda crazy big project that we take on before this next show to improve things even more.

But I get an eight week reprieve before I have to think about any of that for a while.

Flat out both describes the hours I was working in the week leading up to our first one-day this year, and my status post-show (as in flat out in bed). This show was hectic.

how many jump standards can you fit in a nissan versa? eight. eight is the answer.

Some unforseen equipment failures made it such that we couldn’t start working on the new tracks until way too late. I mean, a broken mower will do that to you. We also had a very lofty list of fence improvements, and were somewhat unwilling to compromise on what we would sacrifice to make sure it got done in time for Saturday.

So we got it all done. 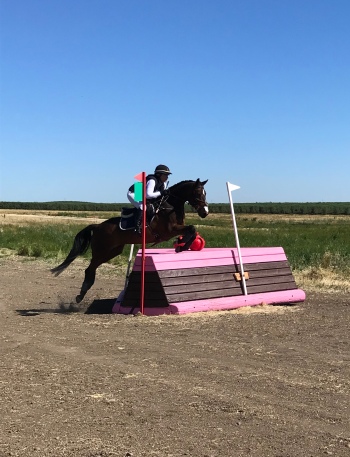 we made a prelim-sized piece of chocolate cake! sprinkles tba

This meant three straight days of 6-8 work at Stallion Station by me and the course builder, and a ton of hours put in by the owner and a whole host of other volunteers. But it looked BALLER and it rode EVEN BETTER.

every level got a rainbow!!

There were also 35mph winds (with gusts up to 45mph) on Friday which made prepping SO MUCH FREAKING FUN.

I love working this show, but I’m glad my life will be getting back to normal for a while. It really takes it out of you. Plus being forced to watch and not getting to show is definitely a bummer. 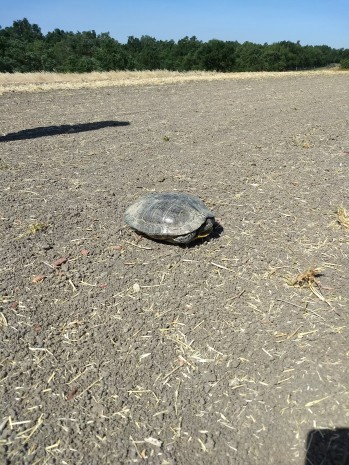 We found this HUUUGE gravid female Western Pond Turtle on course while setting up. It was crazy!! Behind those oak trees to the left, Cache Creek runs through. I think Mrs. Turtle got confused looking for a nest site in the intense wind and came up much further than she needed to.

There’s no regularly schedule of riding in my life any more, but this week should be a nice one. Not too much on the schedule, so plenty of time for the pony.

The May one day is over!! Phew.

This year we ran like a well oiled machine, compared to last year’s steaming hot mess.  Holy crap we were a mess last May.  We were still decorating cross country at 9 PM on Friday night, and I didn’t even print out orders of go until 5 AM that morning.  What a difference a year (and several more shows’ worth) of experience makes. 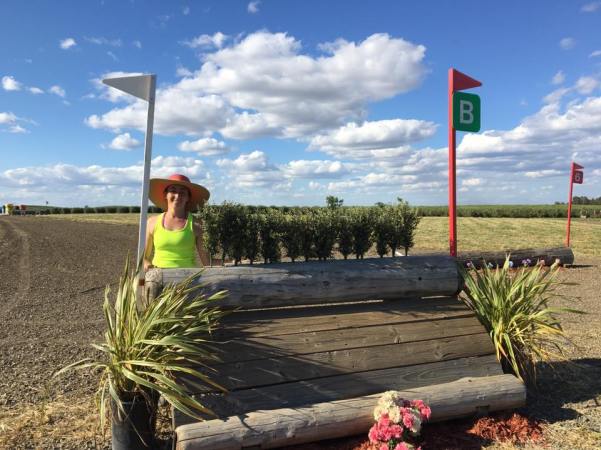 when in doubt, add shrubbery

I’ve adopted cross country course decorations as my own personal mission.  It means I get to make the fences juuuust how I like them — which means lots of fun fences for BN/N.  It seems like a lot of effort gets put in to Training and Prelim fences, for safety reasons as much as appearances, and the intro fences at WSS always get a lot of attention because they are basically just a series of logs of slightly different heights, shapes, and textures.  So to keep it interesting we theme them.  But then BN and Novice seem to get a bit neglected… so I like to make some of their fences really fun.

It’s pretty emotional to watch those first few horses go out on course.  Especially since we run from Prelim down, to see those horses charging out and eating up the course… well, it definitely brought a tear to my eye.  As did watching a few friends at their first event with new baby horses.

The other cool thing about working the events is getting to cozy up to officials!  I’m only half joking here.  There’s a ton to learn from eventing officials, and it’s so much fun to start to recognize them when you go places!  I’ve already learned a lot about how to make a fence easier to read or scarier just by the way we add flowers, as well as some little tidbits about measurement (did you know they measure jumps from 6ft out? so a fence can be shorter or taller than the height for the level at the base, as long as at 6 feet out it’s an appropriate height based on the level of the ground).  We also use a big ass drill to get those flowers in the ground.  It’s one of the best parts of flowering the course.

It's that time of year in the orchard again.
And I thought I'd never have a use for that 12 year old nail polish again!! I almost threw it out!
Off leash privileges granted ✔️
Things have changed a bit in the last two years. The sunsets are still amazing, though. #cartagenafarm