A few more rides and lunging sessions later, Murray’s NQR is invisible and I’m quite happy about it.  Sure, it could come back, but if it’s intermittent or related to being stiff from being stuck inside, then that worries me a bit less.  I plan to keep an especially close eye on him, and we will play it by ear and continue to evaluate as Winter progresses. 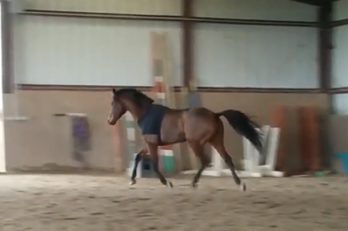 Unfortunately, while Murray’s body seems fine, his brain seems to have gone awol.  I had a jump lesson Friday that was just an exercise in Murray antics and opinions — he was generally uninterested in going anywhere near the chairs in the corner of the arena, which have been there for a solid two years, or near the gate which we had just come in through, or over any part of the footing that had been smoothed or looked in any way out of the ordinary.  My insistence that he actually do these things resulted in some mild body flailing, a tiny bit of screaming and, of course, many tail swishes.  He took a really hard look at one of the fences, tried to stop, decided he was going to go, LAUNCHED himself over it, bucked upon landing, and somehow I managed to stay in the saddle.  After convincing him to just go forward over a few more fences I called it quits as clearly something was up.

I have a few theories.

It is vaguely possible that whatever magnesium product I am using right now is not really working or I need to feed more.  But given that I’ve had problems on this batch of magnesium before, I think it’s time to give another brand a try.  I’m going with Performance Equine’s MagRestore and — just for shits and giggles — I’m going throw in some Focus too.  Focus promises to “Promotes a willingness to please and a winning, confident, cooperative mood. Use prior to and during competitions, workouts or rehab. Useful in any stressful situation. Decreases excitability while maintaining energy for work.” (straight from the manufacturer’s website)  It sounds like witchcraft to me, but with a money back guarantee on a 7-day trial… why not!  (If that doesn’t work, I’ll try Quiessence, a fan favourite at our barn.  If that doesn’t work, we’ll move on to SmartCalm, or even SmartCalmUltra.  If that doesn’t work… we go digging for a hidden testicle.)

Murray could also be intensely sore from our dressage work, and letting me know the 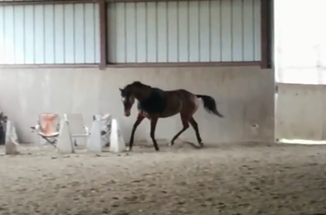 work load is a bit intense in the only way he knows how.  An insane amount of spooking doesn’t seem to be the most straightforward method of presenting this fact to me, but it certainly is one way of expressing feelings.

And then there’s the turnout situation… We’re going on three weeks of no turnout at this point, and with a flooded outdoor arena we can only rotate horse through the indoor for as long as we have before someone wants to use the indoor to ride in.  I had turned Murray out alone in the indoor a couple of times to absolutely no positive effect —  he just wandered around, rolled, and then chatted with his friends stabled near the arena.  But on Friday I turned him out with one of his besties, Connor, and it was a completely different story.  He and Connor have, as Connor’s owner puts it, “a deep understanding of one another” and played pretty constantly for half an hour.  The next day they played for an hour.  And then I had a couple of really nice rides.

I’ve always know that Murray isn’t exactly a good-on-no-turnout kinda guy…. but for some reason this year he has really managed to keep it together in the barn.  In the past, when he’s been locked inside he has struggled to mind his manners inside the barn, so I would lunge him or turn him out before even attempting to tack up.  But this year I have a strangely reasonable horse inside the barn, and then this super unreasonable horse under saddle.  Maybe Murray just really, really, really needed to get out and get some playtime and excess energy done away with?

We will see.  I’m basically throwing everything I have at him — such a good scientific method — to see if that improves anything.  Then I’ll start to eliminate things and see where it leaves us.

It seems that Murray has also made some resolutions for this year.  Mostly to fight (FIGHT) for his right to… nooooot have to do anything he doesn’t want to do.

Today was my first jump lesson since the Chris Scarlett clinic, and I was looking forward to applying some of her principles in our lesson.  Well, all of them really.  I wanted to have a good, quiet, elastic contact with the reins, ride the canter steadily to each fence, and use the outside aids through the turn.  I decided to ease Murray into these things though, so he wouldn’t get all cranked about it like he did in the clinic.  I also followed MIL’s principles of getting Murray to be round before and immediately after transitions, and just persisting until they meet in the middle.

Our warm up was actually awesome.  Murray was forward and game and once I realised that my pushing off my left leg was actually what was making us go crooked after every fence, we were pretty straight too.  I could really feel myself riding the canter and keeping my lower leg on to avoid the shrinking stride before a fence that so often plagues our rides, and Murray was pretty receptive.  We added a vertical to our warm up line, and eventually swung around to a 2’6″ square oxer.  I kept my leg on and my elbows elastic, and I saw a really good spot for us.  I totally thought we were going, until we were in the middle of the fence. 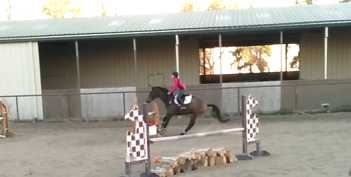 I had no idea what happened.  Like… we were going, and then we weren’t going.  B said Murray saw the second bar on the oxer right as he was taking off and hit the abort button at the very last second.  She lowered the front rail so there were good visual cues around the fence, we came back at it and Murray was like “ha! You can’t trick me with this again!”  B lowered the back rail so it was an X oxer and this I really forced it to happen.  We swung around to the X oxer a few times, then tried to head over to another X oxer and Murray told me to fuck off about that one too.

I made a big deal about him stopping, backed him, trotted him to the fence, and then made a big deal about him going over it. Then we jumped the two oxers a few more times together. I commented to B that Murray felt uncomfortable with the way I was asking him to take the fences in the canter stride, and should I let him go back to the (shittier) way he preferred to jump?  B said yes, and had me let Murray add where he wanted, but keep my leg on to stop the stopping.

Unfortunately, a short break and another attempt at the course, that same first oxer that gave us trouble (put up so that the back bar was 2’6″ and the front bar was like one side of an X) got us again.  I leaned to it when I felt the takeoff point which was bad, but I was riding super defensively, and I find it hard to stay with Murray over fences when I am being so defensive.  We did a quick check over Murray’s body for soreness — nothing obvious — and I decided to forego jumping anything of substantial size (i.e. above 2 feet) and just school Murray over the smaller fences until we got back into the groove.  This took… several rounds.

Murray was starting to feel like he had at Camelot, where  it was a fight to get to the base of each fence, then a  mad dash until the next.  When he refused to listen to me halting at one point and I had to get my point across he even pulled the “stop with front feet skid-d-d-d-d” move on me. 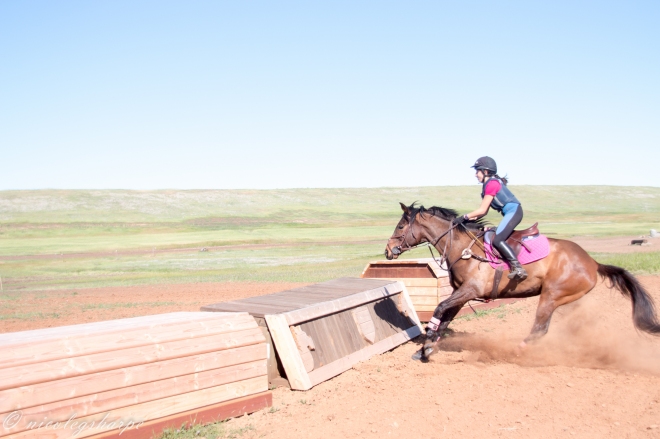 proof that he can canter-halt

One fence in particular was notable, because I’d let Murray get the suuuuuuuuper shitty deep spot to the prior fence that he wanted, and now we were approaching the next fence I had asked for him to step forward (all legs, no whip to avoid scariness).  I kept my leg on but let him settle himself back to the smaller stride he was comfortable with and right in the perfect takeoff point he just sat down and stopped.  B was like “Damn, that was a really good ride. There was nothing wrong with that ride.”  At other refused fences she had pointed out me leaning a little bit — not throwing myself at the fence, but just enough to upset poor horsey boy’s balance, maybe — and at one I just failed to ride, but that fence was a good ride.  And I still got a stop.

It was just so. fucking. confusing.  Murray wasn’t making a big deal out of the stops, just coming to a dead halt — at least, he didn’t make a big deal about anything until after I lay into him when he deserved it.  Something was definitely going on, but it was really hard to pinpoint: more than a couple of times he whale-eyed a fence, and he was panic-galloping between and after fences a little, but we’d come to a halt after a “course” and he wasn’t scared of any fences or anxious at all.  None of the anxiety came out until we were right on top of a fence, and then it was like “oh actually NO.”

So… that was weird.  I really don’t know how to problem-solve this, except to have another jump lesson (already scheduled!) later this week and see what comes out during it.  I have some hypotheses about his behavior that are worth exploring but… it’s all so very interesting. 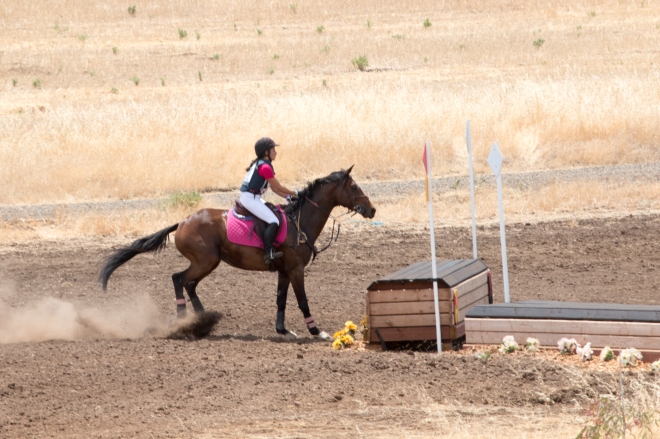 We jumped this even though I’m not perfectly upright