Having good hands is something I aspire to.  I’d like to think that I have soft hands, because even though I tend toward too long of reins I’m quick to slip them or release, and I can follow decently.  Also, I’m a big mane grabber — so at least I’m not balancing on my horse’s mouth. 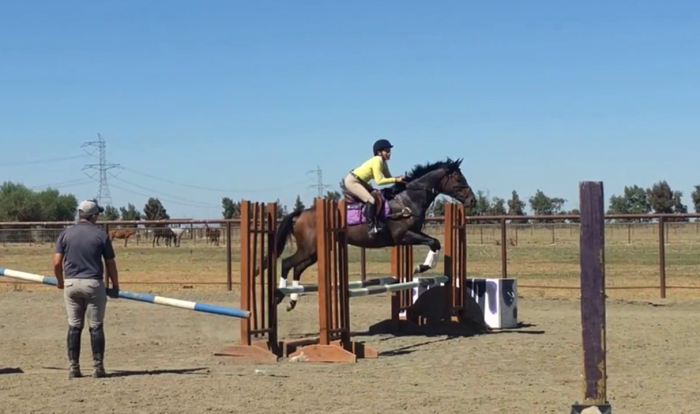 But what I really want to talk about is how people are taught to ride, and what they do with their hands then.  Because I see an awful lot of riders getting pulled up out of the tack by their hands and I’m like… don’t we all know we’re not supposed to be doing that, right?

Some horses are more sensitive than others, of course.  I think if I’d tried to haul myself over a fence on Murray’s mouth when he was four, five, or six (or honestly, even now) he’d be like UMM EXCUSE ME pretty hard.  But Quincy was just a fucking trooper of a five year old and was happy to drag me over whatever.  He was the best.

So I wonder: how do you think the way we are taught to ride influences our proclivity to haul on our horses’ faces?  I honestly don’t remember a ton of my training as it pertained to hands in the horses immediately prior to Murray, but Murray let me know early and often that he was not comfortable with a constant contact.  Especially not my shitty, incompetent, amateur contact.  He would accept a loose rein or march his ass backwards to the barn and that was that.  So a loose rein it was, and I learned to steer with my legs and seat.

I hear a lot of instructors (including some of my early ones) telling their students to keep a steady pressure or contact on the reins.  Inevitably, you see a lot of nooblets pulling themselves up and down and up and down at the trot on their charming, patient, lovely lesson horses’ mouths.  I also understand the lure of holding on to those reins — without them, you can’t pull your horse up quickly if they do something stupid and before you learn to steer properly they are your steering wheel.  Not everybody likes to ride around on gigantic, unfamiliar beasts all “Jesus take the wheel!” We know that one can’t have good hands without something of an independent seat, but are we shooting ourselves in the foot by teaching students to ride so much with their hands from early on?  Is there another option?

Based on my experience with Murray, I really feel that it would be better for students to learn to ride with a loop in their reins and still steer, brake, and balance.  Sure, learning in this order has created some problems for me (like a general reluctance to feel pressure on the reins, and an inability to hold up the weight of my own hands), but I think it’s avoided other bigger problems: I don’t balance on my hands (mostly) and I don’t throw my entire body forward over the fences in an attempt to not hit my horse in the mouth (mostly; I do it for other reasons though).

So why do we teach our students to hold the reins in such a way that they end up balancing on their horses’ mouths?  Every student is going to balance on her horse’s mouth to learn to post at first, but after you find your balance point why keep doing it?  Why let someone balance on their horse’s mouth as they are two-pointing around?  Or am I seeing a hugely biased sample of young amateurs at small shows that are friendly to nooby riders?

Ok so lots of little kids with long reins in this pic… but we were also walking.

So tell me, how were you taught to hold or keep contact on the reins when you learned to ride?  Is there something I’m missing here because, shut up Nicole, you’ve been riding for ten minutes in a very small geographical location?  Has it changed since you were taught to ride?  Do you see young students riding differently now than when you were a student?  Am I full of shit and it really is better to learn to ride with contact because [valid reasons]?

It just seems to me that there’s a better way, and I wonder why more students and riders aren’t employing it.

I’ve always wondered what to think about horses that don’t use themselves “properly” over fences.  I’m sure this has nothing to do with having a chronic knee hanger.

All silliness aside, in jumping literature there’s a pretty consistent definition of how a horse should be jumping, and a general consensus that it is desirable for a horse to jump that way.  And I get it — biomechanics and physics all say it’s best — but what I’m really wondering is, what do you think of a horse that isn’t using himself as best he can over fences?

Ignore rider interference — if you can.  What does it make you think when you see a horse jumping a 2’6″ fence with perfect bascule and tightly tucked knees vs. hanging knees and a flat profile?  How important really is it that a horse uses his body to this level of perfection over all sizes of fence?  Are you impressed with a horse you see using with a textbook perfect bascule over 2’6″, or does it not matter to you until 3′ or higher?  Is this related to your discipline?

Not intended to be a “bad” example, merely eye candy filler.

I will admit to not being particularly impressed with a horse who consistently busts out his best moves under 3′.  Lots of caveats exist for this, of course — young horses, green horses, tiny horses, scary fences, show environment, etc. — but in general, I don’t think it’s really necessary for horses to pull out their best moves up to 3′.  I can jump 2’6″ and I’m not cracking my back over it.  I don’t mean to say that I prefer to see sloppy jumping, but a horse that is relaxed and at ease at the lower heights, and who doesn’t look like he’s making a big effort over them suggests to me that he can jump bigger.

Even above 3′, if a horse is relaxed and easily clearing a fence, I’m not really concerned with his shape or bascule.  There doesn’t seem to be a need to reach and stretch over a 3’6″ oxer the way there is over a Grand Prix one, though I’ve obviously never ridden either level myself.  Of course, a perfect jump makes for a nicer picture, but does it really make for a nicer jumper?  I’m just not sure. 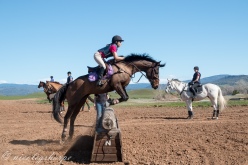 This probably has a lot to do with eventing — so little is the George Morrisian ideal in our world, and there are lots of good examples of horses beautifully clearing big fences without perfect form.  So I’m probably much more lax regarding form than others.

Am I way off base here?  Is this totally wrong?  Is there way more nuance I am missing?  I would love to hear your thoughts — be brutally honest.  I can take it 😉

Teach Me Tuesday is a segment I have blatantly ripped off of the SprinklerBandit.  However, I am really, really, dyingly curious on this one and I needz to know!  But hear me out — I’m not some heathen jumping around without being able to see a spot at all.  What I’m interested in here are the differences in our perceptions when we see a spot.

Tell me: what is it, exactly, that you see when you “see” a spot?

I know how to feel/see that I’m going to get a good spot.  When I’m cantering down to a jump I can quite accurately count from 4 strides out to exactly when I will be jumping.  And I know whether that spot is going to be a little long, deep, or pretty perfect.  It’s much easier to “see” a perfect spot when we have a steady, quality canter, and it’s much easier to get that spot then too, obviously.  I’m also pretty adequately competent at adjusting (usually holding, at this stage of Murray’s training) Murray’s stride to get a better spot.  But I don’t see the spot so much as feel a certainty when I’m four (sometimes more, sometimes fewer) strides out that I don’t need to worry about where I’m jumping from. 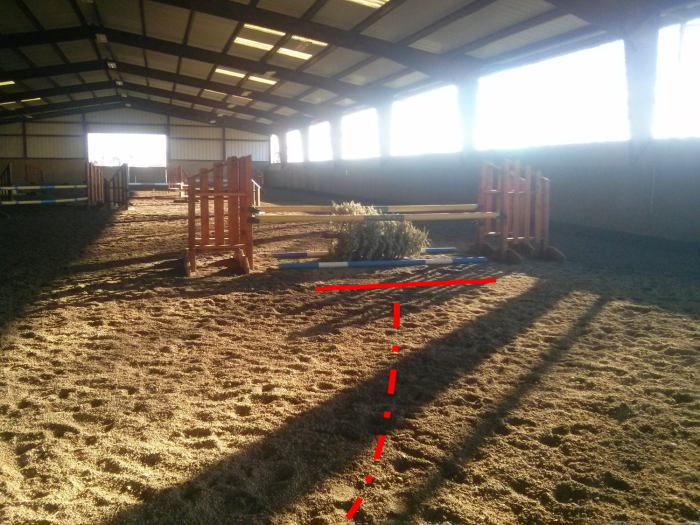 So coming up on the Christmas tree, I’d be thinking that I’m about to jump pretty nicely in three strides and, unless he’s tired or I fuck something up, that’s what’s going to happen.  The thing is, Murray will go whether I see the spot or not (just gotta keep those legs steady and pretend I see it), and since I ride in a really light seat and let Murray’s jump close my body angle over the fence, I don’t tend to worry about it too much.

But I know seeing your spot is much more important in other disciplines, so do any of you want to enlighten me as to what you see (or feel!) when you see a spot? Please?