Skip to content
A year ago (tonight! accounting for the time difference) I met this incredible little horse for the first time. I hadn't jumped in a year, and Speedy's trainer told me to jump him over a small trakehner. I politely said no thanks, I hadn't jumped a trakehner in a loooong time and didn't want to have a bad experience, or give the horse a bad ride.
oh geez
hot Speedy summer ✈️🌞🐭
hot (then rainy, then hot again) horse show vibes

Last week’s jump lesson with Murray was filled with exuberance and joy for we jumped in the outside arena for the first time since December! Huzzah! Huzzah!  Murray was very happy to be outside and we jumped all around a relatively simple course, albeit with some new, scary filler, with ease.  Kept it lower, except for a hanging log that was a solid 3′ of terror — I was seriously concerned it would come down.  We jumped everything in stride, which was very comforting after our XC adventure left me a little bit shocked at how reliant I’ve become on the deep spots.  However, it turns out that deep spots are a function of the tight turns in the indoor and I can, indeed, still jump things in a gallop stride.  So fun!

The downside to the lesson was that it is clear that Murray is not nearly as fit as I had hoped he would be by, oh, March 16th.  Remember when I was obsessed with equine fitness?  Yeah, let’s recap that.  I got totally scrooged on my schedule for Murray by (2/9) him getting that puffy knee, and me being afraid to work him on it,  (2/23) stone bruise/whatever after XC schooling, (2/25) going to Italy for a week, and (3/6) him falling on his side and being both sore and then requiring a chiro (3/12), after which one is supposed to only do light work (w/t only) for at least four days.  Soooo that’s every week since I last did a timed gallop set.  Yep.  So we’re approximately up to, oh I don’t know, three and a half minute canter sets?  Fortunately, the kid is quite able to do long trot sets (we frequently work for 10 minutes at a go), but I usually only do 2-3 of these per ride, and trotting is not what one does on XC.

Our dressage rides since my lesson have also revealed the holes that I’ve let re-form in Murray’s body this winter by not sticking to my tried-and-true exercises.  Last year I was obsessed (quite literally) with spiral in and out, especially to the right, and Murray got a lot more used to bringing his right hind under and pushing off of it through that exercise.  I’ve not done it in approximately five months (bad, bad Nicole), and Murray has been travelling haunches-in to the right for at least two.  I’m so annoyed at myself for letting such an important exercise slip — because what was I doing if I wasn’t doing spiral in and out?!  I hardly worked on anything new in the last five months (started the haunches in & my new lunging regime) sooooo there’s really no excuse.

So it’s back to my old favourite exercises, and reminding Murray that getting off my right leg is not a favor, it’s necessary.  Upside: Murray has put on a TON of muscle this winter (I should take some comparison pictures…) and his neck is getting huge.  Most impressive is the muscle he’s laying down in his lower back, which is obviously critical to dressage.

On the other hand, the little horse has been progressing in leaps and bounds since our first ride last week.  Every day he got quieter and more relaxed on the lunge line, and picked up on my voice commands excellently.  I even have him stopping out on the circle without turning in, which is something I’m literally still struggling with Murray to accomplish.  I’ve been keeping things light and breezy for our actual under-saddle work, and he’s much more relaxed and I actually asked for a little trot last week.

On Friday, as we did our post-lunge walk around the arena, little horse saw something terrifying (which I assumed was a flowery gate jump) and sat, spun, and tried to escape but was kinda confused about what direction he wanted to actually go.  I grabbed onto his mane, which is fortunately plentiful, and held on, and once he settled we walked quietly past the terrifying gate.  I realized then that it wasn’t the gate that was so horrible, but the aforementioned hanging log!  The way he was acting it was clear that there was something sick and wrong about that log.  I got off in the center of the arena once little horse had settled and walked him over to the log.  This precipitated much snorting, but the little one is quite brave and shortly reached out to touch the offending log.  Once he realised he could try to eat strips of the bark, little horse was over it and happily continued trying to explore the log for foodstuffs.

There’s a super epic winter storm expected in Sacramento starting tomorrow — 5″ in 24 hours, which is hardly a lot of rain but in an area that gets like 30″ a year, that’s a lot of rain — so we’re going all out at the barn. We closed all the paddock doors (so our precious event horses are now stuck in their luscious 14’x14′ stalls), closed the barn doors, and blocked off some of the areas of the barn with sand bags to prevent flooding.  California barns are built like California highschools — outside affairs meant for sunny weather — and so we are just…. taking this seriously.  With gusts expected u to 60mph I won’t be riding tomorrow, but probably will suck it up and dressage a bit on Friday.  I re-dug the drainage trenches in Murray’s paddock so it won’t be a big fat puddleswamp at the end of this downpour.

I got all up in my own head today about riding in the 3′ jumper class at the first local schooling show of 2015 (Superbowl Sunday, without fail), and let Murray just lose all power to three jumps in tonight’s lesson. I also started our warm up with a bit of a fight (listen to my leg MEOW, not when you want to!), so M wasn’t exactly pleased with me.  I shook it off and started singing the Jeopardy theme song to keep a rhythm and calm myself down.  (If you have rhythm problems you should totally sing aloud! It’s a crazy magic trick, I swear.)  We did a couple of bending lines — yellow to red and yellow to blue oxer — and the turns from the red to the left and right were pretty tight. So good work all around.  The best line was the diagonal combo — a 3 to a 2 stride — which Murray absolutely attacked. After a lackluster lesson to that point, I was pretty pleased.  Jumps were about 2’6″+ (our holes are drilled funny), so lots of room for confidence building and nothing scary.

We’ve been doing a little amateur whorlology at the barn, inspired by Foxpoint Farms and a blog post I read today and then promptly forgot — please link it to me if you know what one I’m talking about!  Murray has a single medium whorl in the middle of his forehead, so… according to swirlology he should have a pretty steady single personality? Yeah, not so sure that’s true.

He’s also got a sweet triple-ish whorl on his chest. Starts in the middle then feathers out on both sides, but unevenly. 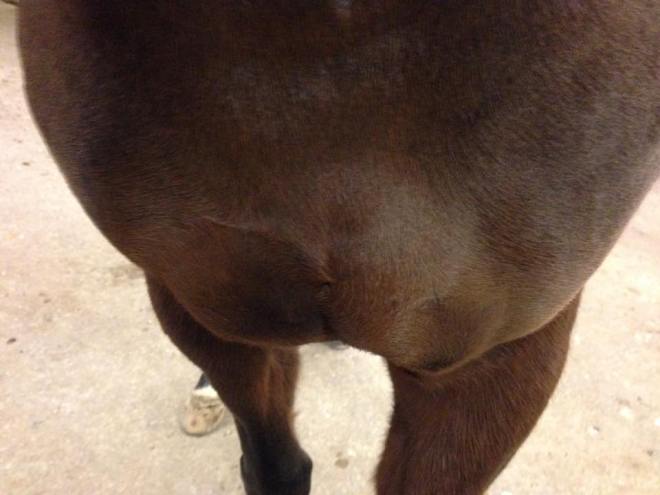 Murray’s new BFF Connor has two high, tight ones so clearly he’s destined for greatness. But you could basically tell that by just looking at him. 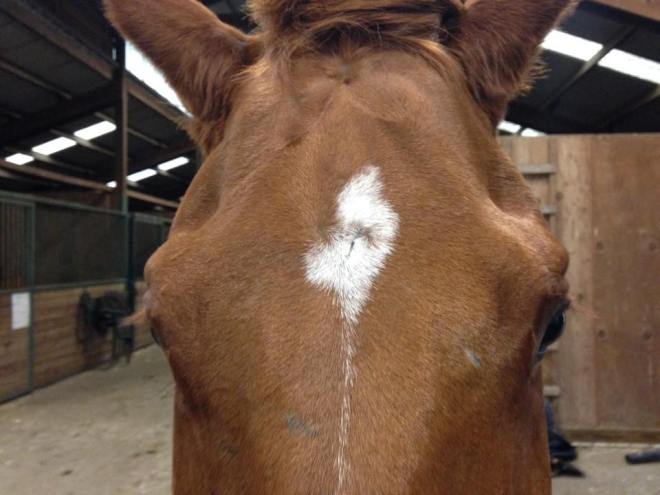 WHAT DOES IT ALL MEAN? I don’t know. Maybe I should call out the horse communicator.

This weekend I’m doing Second Thanksgiving, which is not unlike Friendsgiving, but I basically control the menu. We’re doing “Turchetta,” stuffing waffles,  and all kinds of extravagant foodstuffs.  I currently have two 13 lb turkeys thawing in my bath tub. It’s a good life.

My roommate and I like to stack our cats for fun.  Adopting a mini-me of my roommate’s cat was a good call. 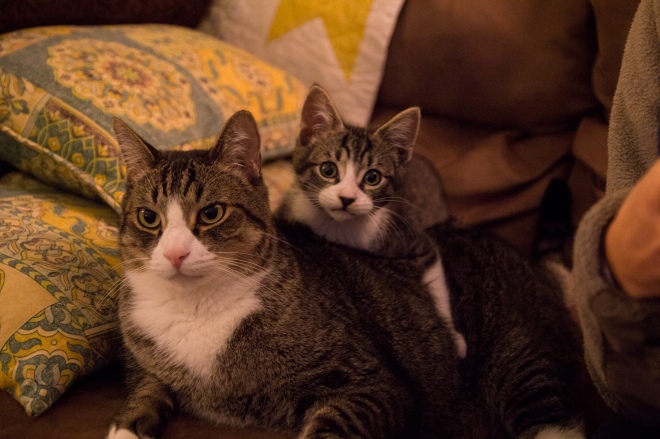