There are still a few things I learned at Mary that I didn’t fit into a bigger post, but were still worth remembering. As if I don’t wish I could remember all of it.

the pelvis as a bowl

I had my pelvis-bowl completely incorrectly oriented. I’ve heard several times that the pelvis is a bowl, and in your neutral pelvis your bowl should be perfectly upright — no spillage of your chilli, gin and tonic, guts, or whatsoever else it pleases you to fill your pelvic bowl with.

I had always envisioned the bowl in the pelvis to be following the angle of the pelvis bones — a bit like I’ve shown in the image below.

And as you can see — with your pelvis like this, precious rice is falling out of the bowl!

To combat that and keep the bowl “upright” I tilted my pelvis back. Resulting in my riding on my ischial tuberosity, or where my ischial callosities would be were I an Old World Monkey. Turns out I had this all wrong. 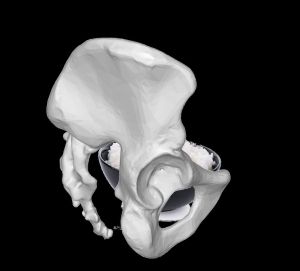 This is a great way to shrink your underneath, in case you’re wondering.

Instead, I had to reorient how I thought of the bowl inside the pelvis. The bowl sits upright in the neutral pelvis, even if that means that the sides of the bowl don’t nestle up against the angles of the pelvis quite perfectly. 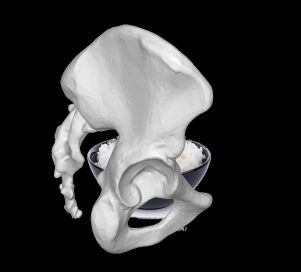 This gives you a much bigger place to sit in the saddle, since you’re not trying to cram all of your weight back between your seat bones and your tail bone.

I’m still not great at feeling when my pelvis is neutral, but at least I’m not constantly trying to tilt it crazily backwards now!

During our neutral spine and realignments lab, I sat in the EQ Saddle Science saddle that we had out and Kate realigned me on the saddle. One of the experienced biomechanics instructors, Agi, was helping her with the more nuanced aspects of the realignment and exercise. After realigning me in the saddle, Agi grabbed some thin rubber resistance bands and popped them on my torso to test my strength in different parts of my torso.

Knowing how my middle is filled with a layer of shifting sand, I expected the resistances to just reveal how utterly, terribly weak I was in my upper body. Agi put the first band right under my arms but above my boobs and gentle pulled back, and astonishingly I actually managed to stay quite steady. I also felt my seatbones, especially my left one, go *thunk* into the saddle. When she moved the resistance band below my boobs on my ribs, I struggled not to bend in the middle. When she put the band just below my waistband I could hardly resist the pull at all. 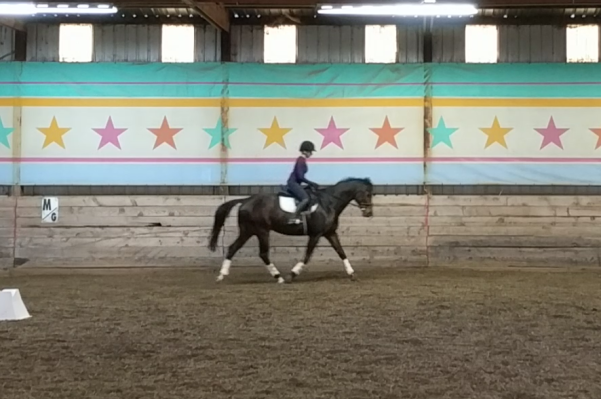 a cute bay horse to break up all these words

Agi said that I should be able to generate and maintain the tone in my torso that I felt with the first resistance band all the time. ALL THE TIME?!?! I’m honestly not even sure I could turn all those muscles on if I wanted to, let alone without having someone pull on me to generate that pressure. I need to figure a way back to that feeling so I can start practicing it more!

During our second day’s rides, the workshop participants were paying special attention to my torso and asymmetry during the rising trot. Mary had me turn down the center away from the students a few times. People had already commented that I can slosh my hips to the left much better than I can to the right in the walk, and in the trot there was some interesting “hmmm, what could be going on here?” discussion of my torso. Anne, workshop host and physical therapist extraordinaire, suggested that people pay close attention to what part of my torso wasn’t moving, instead of what was.

What Anne was seeing was that there was a very still part of my torso right below my right ribs, and it was like the rest of my body was rotating and tilting around that still section. Which was a funny way to describe it, but I’ve often felt that my right hip falls away from me dorsally as much as my right shoulder slips away from me ventrally. 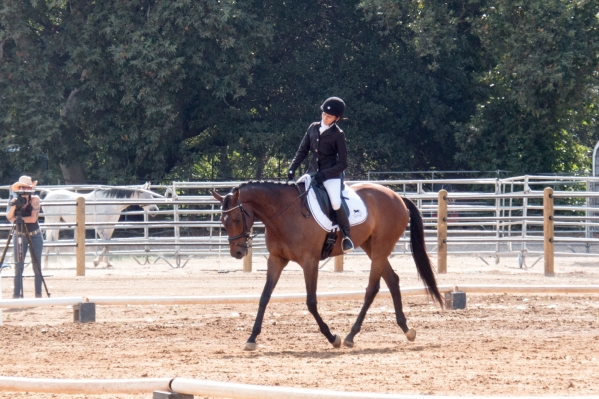 Anne offered to do some quick and dirty physical therapy on me to see if we could even me out in the saddle afterward. So Flounder and I stepped to the side and Anne poked around my midsection for a bit. I’ve never had physical therapy done, but other than Murray-induced injuries, I’ve never really managed to hurt myself all that badly. (knock on wood!) Anne put pressure on a dorsal and ventral point right under my ribs and explained that she thought I had something like little “spot welds” in my torso that were restricting my movement, potentially from a cranial nerve injury in the past (but it’s unclear). She was going to release the pressure very quickly after a minute or two of holding it there to shock my system into letting go of the welds. While Anne was talking and holding pressure on my body I could feel my right shoulder blade settling downward, and felt a bit of a general “sinking” in the right side of my body. After she release the pressure quickly it was like all my guts were reorganizing themselves down and more into my pelvis.

It was totally weird and totally more woo-woo than I usually prescribe to. But I can’t deny that it felt very interesting. Anne held on to another pressure point for a bit and then dropped it, and I felt that sinking feeling again, though less intensely.

I got back to riding to many ooohs and aaaahs from the workshop attendees. I felt very even. And, importantly, like I didn’t have to think about twisting gently to the right, which I have to think about pretty much all the time anyway. Megan said that she suddenly noticed my right shoulderblade. Like she always knew I had one, but it wasn’t until that moment that she realized how solid and present it could be. I could also feel the muscle going up into my neck on the right side in a way I’d never quite felt it before — not painfully, but present-fully, if that makes sense.

It definitely made me want to pursue some more PT with someone of Anne’s caliber and training. Though it will probably get pushed to the backburner with the craziness of my year coming up. 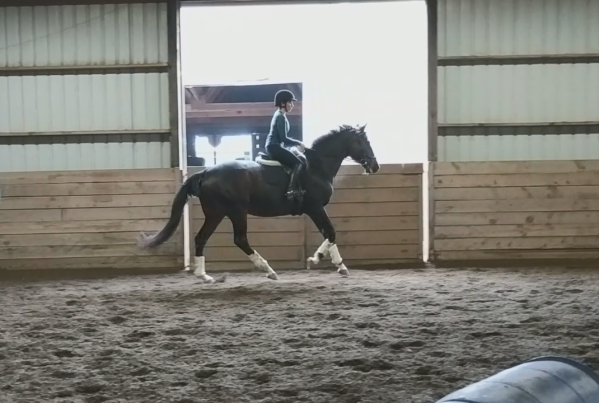 need more back and down!

When we worked on the canter mechanic, I told Mary that it was really huge for me to learn that I could use the knee blocks of the saddle to help get me back and down into the saddle. She interrupted me and suggested that instead I think about the shape of the canter mechanic to be changing the V made by my legs and seat bone in the canter. The V should get longer and skinner in the back-and-down as my seatbones slide over my skin.

Since I’ve been thinking about the mechanic that way, I’ve had much better luck staying in the saddle — and when you stay in the saddle you really can influence the canter much more.