Last weekend I had the great joy of spending three days at the Mary Wanless workshop held at American Sport Horse. Even better — I got to be a demo rider. This caused a bit of scrambling and panic as I didn’t know I was a demo rider until the Monday before the workshop, so I had to plan to get the hell down to Dodge much earlier than I thought, and Kate had to figure out what horse she was going to sacrifice to three days of torturing me in front of a crowd. 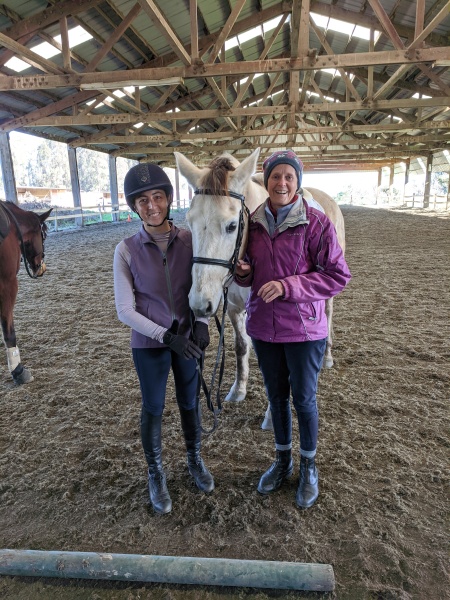 we both love purple we are clearly meant to be soulmates

This was a bit of a cause for trepidation for me, as Flounder has a serious habit of bullying me. He sees me coming, knows I have treats, approximates my weight as not terribly more than that of a 14 year old girl, and pulls out his authenticated LessonHorse™ moves upon me. He loses steering, rushes, balks, throws his head up, throws his head down, and generally behaves as if he’s never even thought about going on the bit before, much less been shown successfully by an actually 14 year old girl. And the worst part? IT WORKS. Fortunately for me, I begged Kate to let me ride a much nicer and smaller pony she has right before I got on Flounder, and in the small-pony ride Kate gave me some tools that I immediately put to use on Captain Flounderpants to prevent him from taking such terrible advantage of me. I cackled the whole time and Flounder, reluctantly, gave up.

yellowhorse in his natural habitat, snoozin in shavings

Torturing myself and learning more about my weaknesses is kinda my jam, so I was very, very excited to be a demo rider. I have some crazy asymmetries and the world’s least box-like torso and I was pumped to have them addressed in front of a crowd. As a demo ride you are not allowed to change what you’re doing until you’re specifically told to, or told to experiment with changing it. So you really get used to the uncomfortable.

Over the course of the weekend, many delightful things were said about me. Things like, “you have a great attitude about this,” and “she has a great tonal quality to her legs, like putty” and “the stuffing doesn’t fade from her legs partway down, I wish I had that” and “you want to see that tendon, which she has in spades”. Those were really awesome things to hear. I’ve been working on the quality of my leg position and tonality all year long, ever since last year’s workshop. So to hear that it’s been paying off was obviously wonderful.

But I also got to hear many other delightful things about me. Things like, “I almost never tell riders to stretch up. You’re one of them. Congratulations.”, and “can you hang yourself in a harness? Good, now hang yourself some more,” and “Nicole’s torso is one of the hardest I’ve worked to align, it’s a total soap in the bathtub.” Also, “she has a layer of shifting sand above her pelvis”, and “have you had a serious head injury at some point in your life?”  and “keep working on hanging yourself over there!” Additionally, “I think Nicole has the squashiest middle I’ve ever seen on a rider. Congratulations! You’ve given me a new challenge!”

To say that I’m pleased I could be one of the few riders Mary has ever told to stretch up and the squashiest middle she’s ever seen would be a vast understatement. I’m fucking delighted.

But my delight isn’t just in Tanya Vik naming me most likely to have organs made out of shifty sand (or Mary’s suggestion – tiny polystyrene balls) or having Anne Howard complimenting the putty-like quality of my leg or Heidi Chote telling me that I did a good job through Floundy’s ridiculous head-swishing or Agi Yother saying my resistance is strong or Joan Bolton telling me my following mechanic is quite good. Yes, obviously I’m happy to brag ad nauseum about those things, because they made my chest puff up. And it wasn’t even getting to watch GP riders heckle one another about their biomechanical flaws. (“You look like the type of people we make fun of. And I don’t want to have to make fun of you!”)

The real delight is the whole environment. Everything taken together. First time learners, second time learners, old-timer-learners, returning learners. All of us working together on a puzzle and trying to put it together into its most whole and accurate form. Some of us have more pieces than others, some of us are the pieces, some pieces disappear after you find them, and some of us don’t even know about the existence of certain pieces yet — we’re just starting to learning that maybe there’s something missing in our puzzle because all the pieces we do have don’t fit together quite right and there’s a kindof puzzle-piece-shaped-hole right in the middle there. 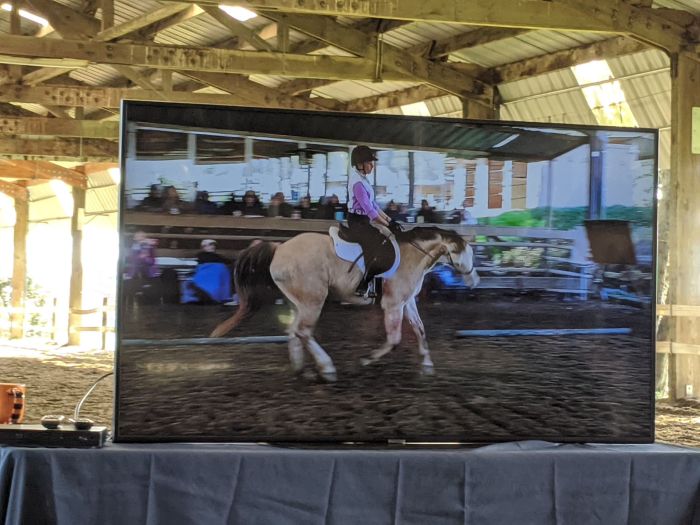 we reviewed footage of the canter. flounder did not approve of canter.

As Mary always says: rosebud is no worse than a rose.

3 thoughts on “a superlative weekend with mary wanless”