I want to say “how the fork did so much time pass since I last wrote something?!” but that would be disingenuous. I know how that happens. You get home from work or riding or errands and it’s dark at 4:30 PM (because, it turns out, Portland is north of Toronto, and basically on the same latitude as Montreal and Ottawa) and because it’s already dark you light a fire to make it nice and cozy inside and once you’ve lit the fire you’d better sit by the fireplace and watch tv to appreciate the warmth of the fire and your husband has this thing about not tiptaptyping away on your laptop when you’re watching tv “together” so your laptop goes ignored from 4:30 PM until next week even though you totally have things to write about. 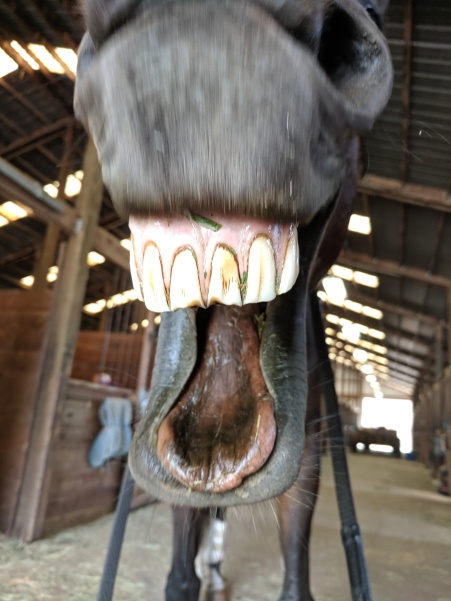 So there you have it. One day turns into two days turns into November turns into 2020. And you’ve watched all of Dark and The Crown and Rick and Morty and read a big old pile of books on top of that and somehow haven’t written anything on the blog. Even though you totally have thought-vomit to share!

But it’s all priorities, right? And I can’t — and don’t — expect my priorities to be the same as they were in grad school. It’s still taking me a bit to adjust to the idea that my life doesn’t leave as much time for blogging as I had in the past, even though I’m obviously living the reality of it.  I have a little bit of inner turmoil about it, but since there’s not much I can do to change my schedule, I don’t dwell on it too much. 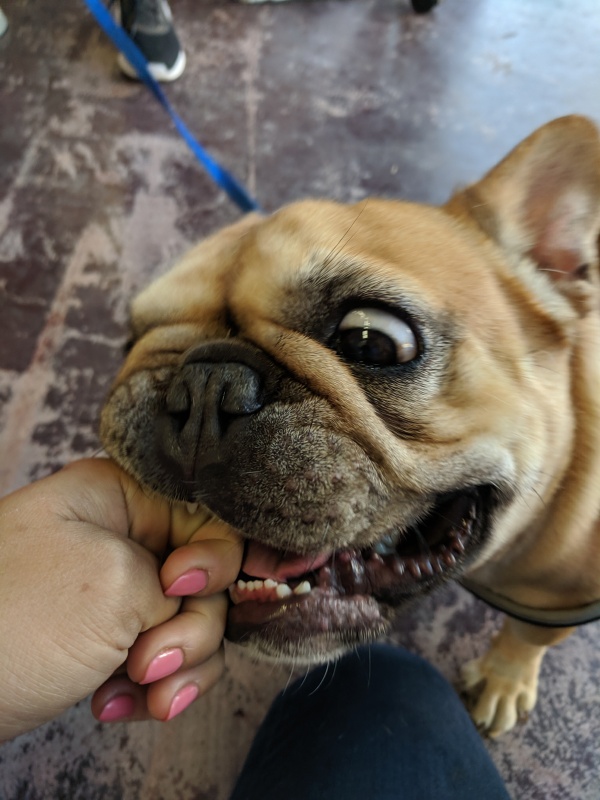 i met this dog at Rebecca. his name is Dwight.

One of the repercussions of not blogging as much is not having a good record of my thoughts and learnings after rides and lessons. And when I sat down to think about goals for this  year, I was like “well, I’ll just skip the 2019 goals recap, no big deal.” But then I looked back and saw that I skipped my 2018 goals recap and the last one I did was in January of 18! I was slightly horrified, that is forever ago. THAT WAS LAST DECADE! I’m willing to give myself a pass on the 2018 goals recap since I was still wallowing in the misery of retiring Murray at that point.

Things keep changing in my life, and this year is no exception. So here’s what we got through last year, and we’ll just have to wait and see what 2020 brings us.

Lessons 3x a month (as the schedule allows) – Giving myself a 7/10 on this one. There were a lot of months (see above) when I didn’t lesson at all, but if I was around and T was feeling good, we lessoned on the weekends for sure! And I even got a few private lessons in there. 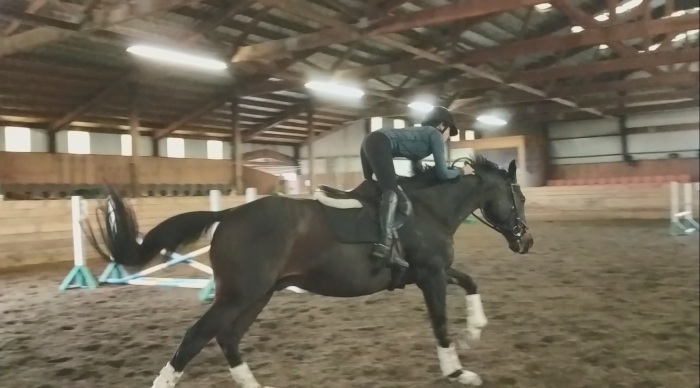 and look how good at riding i am after all those lessons!

Take the pony to one show – 0/10 here — womp womp. The timing just never worked out.

– Um. Does window shopping count? More realistically, I cancelled this goal when I saw that it wasn’t in the (mostly financial, but also time-constraint) cards for me this year.

Save for a new horse – I didn’t get to this, thus no shopping. My income has been super spotty and variable since I moved to Oregon, which makes saving hard. 0/10. Got an awesome rooster though.

12 months of good habits – This did not go as well as the position fixes. Once again, I was gone a lot, but many of these habits just didn’t stick (bummer). I’m halfway there on a few of them, they just need more time and reinforcement history to become real habits. 1/10

Complete twelve house projects – I did not get as many big house projects done as I wanted, but I got a lot of important stuff finished up. We put in a massive garden (um, that we may need to re-chip this winter, ah well), cleaned out the dining room, removed the obsolete technology shelf, finished a chicken coop, finished the incubator (and used it with great success!), installed the solar coop door, made gravity-fed chicken feed and water tubs that supply a month’s worth of food…. I’m seeing now that most of these goals had to do with chickens but WHATEVER. 10/10. Chickens rule.

HIGHLY recommend setting eggs in the incubator to hatch on your birthday. 10/10 will do again. . . . #peepshow #unsolicitedchickpic

Run once a week (on average) – LOL Oh man. Not sure when I will just give up on running goals? The thing is, the more you run, the easier it is to run. I just… don’t like running and don’t make time for it. But it is winter, and I do need to stay fit so… I guess this one will go back on the table this year. 0/10.

Work on the SO regarding a second dog – After extensive discussions this goal was really scrapped. I mean, I worked on him for sure. That part was successful. But my need for a second dog diminished as the year went on. When an awesome dog falls into my lap, I’ll be ready for them. For now, I have Queen Jellinore (and future foster dogs I hope!).

Do more good – Does running horse trials and getting more dressage shows in my region count as doing more good? 2/10

Write more science-based blogs – Didn’t happen. Time is hard to come by in my life. I keep playing with chickens instead of doing other stuff.

Meet more bloggers! – I did this! It was awesome! 8/10 ’cause I could have worked harder and met a few more. However, in addition to meeting some new bloggers, I met some awesome new people and made some amazing new friends. Mostly through running the horse trials. It really warms my heart when amazing people show up to help you and love working on your project and just keep coming back and supporting you and being useful. Those people are the best people. I love you, awesome people.

Murray still gets his own category here! Just ’cause he’s retired doesn’t mean he can’t better himself. But, really, he has only one goal:

Do not get kicked out of his cushy retirement situation. This year Murray was the KING of achieving his goals and got 100%! He did get kicked off of Wonder Farrier’s list for trying to kick her, but her assistant is happy to trim him every 12 weeks (he’s on an every-other cycle trim plan) with the help of some WonderDrugz(TM). The damn smackie threatens to kick as soon as the farrier gets to his hind feet, and we’ve tried working through it but he just gets rude. He will, however, stand perfectly still for a little IV injection and then happily submits to hind trims. The bastard. HOWEVER, he’s good with his pasture buddy, he keeps weight on well, doesn’t even wear a blanket, and he’s not expensive. He can have all the drugs he wants.

(PS: The post title references from from this Eminem song. It always springs into my head when people say “Back to reality,” which happens a lot at this time of year.)

5 thoughts on “whoop, there goes gravity”