Back in February, one of the ladies at the barn (J, not to be confused with Trainer J/TrJ) floated a really interesting idea to me at TrJ’s birthday party. J and I were talking about her two horses, and she said she needed to find a leaser for her gelding now that he was back in full work, and then said “you should lease him!” 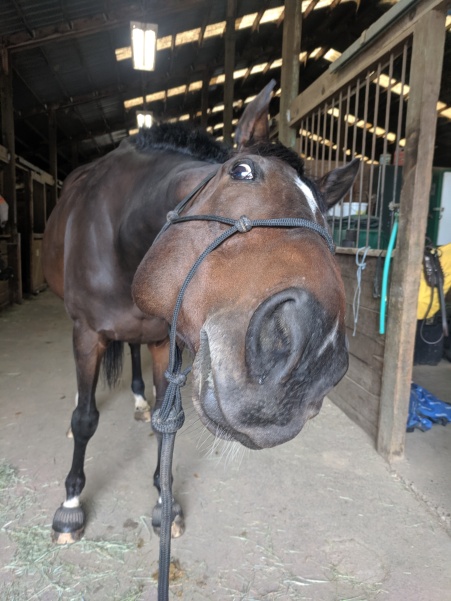 who would not want to play with this adorable snoot

I was just a month into the pony lease at this point, and didn’t want to offend my new trainer further (after the offense of having to deal with Murray while I was gone in Australia) by dumping her pony for a lease that doesn’t really benefit her. Plus, I was deep into being poor and having not very much time, so I wasn’t in a rush to make any changes. I told J as much, and she thought that was totally reasonable.

As the pony and I continued to work together, and I accumulated a bit more money, the full-size-horse bug came back. Sammy is awesome, and he’s a ton of fun. But riding a pony is not the same as riding a horse, and there was always a part of me that felt like I would struggle with showing him even at BN. Maybe it was totally mental — 2’7″ fences do look pretty big from the back of a 13.2 hand pony — but I just felt weird about taking him out and galloping him XC. Plus, my ability to grow my skills at Novice were definitely curtailed with the pony. So when J and I talked one day about my concerns with showing the pony, she asked again if I wanted to lease her gelding. And I was definitely interested. 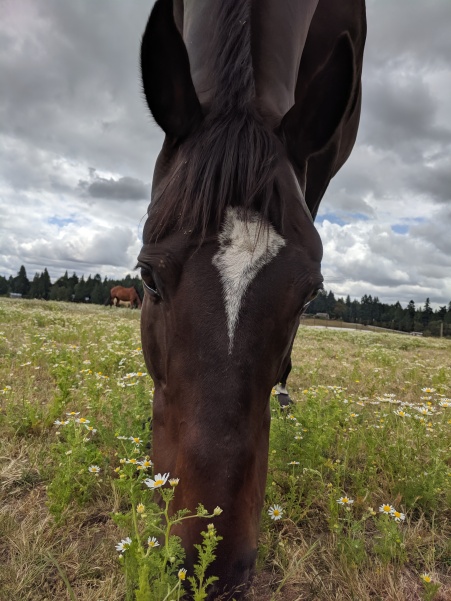 We figured out a way to present this idea to TrJ in the most appealing way possible, and luckily for us, she thought it was a good idea too! So in mid May, I got to swing a leg over this adorable brown lug: Timer. (The pony has not been abandoned, he’s enjoying a full lease from the kid who half-leases him during the school year.) 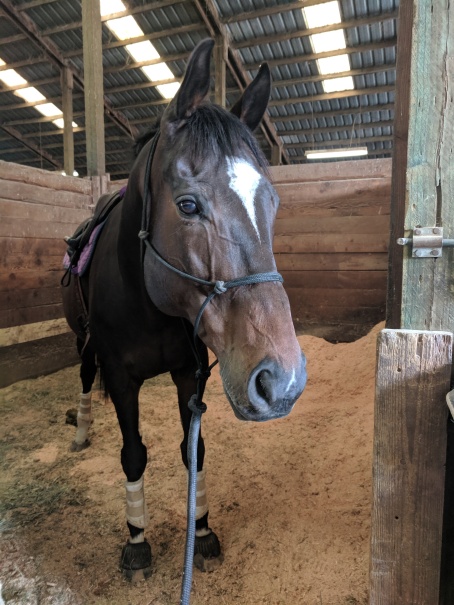 he has the sweetest face

Timer was pulled from the track by TrJ when he was 8, after racing nearly 50 times and winning around $40,000. (Which is actually not a lot of money for a horse who spent so long on the track.) T took a long while to adjust to being off the track — he was strong and opinionated and liked things to be just so. J bought him a few years after he came off the track, and with TrJ did much of his training. Timer and J were competing at training level when he injured his suspensory (about 3 years ago, I think). The tear itself was straightforward, but the vets were not optimistic about his prognosis because Timer hated stall rest and behaved very poorly in there. So J opted to throw him out in pasture and just let him do his own thing. Three years later, he’s healed up and back in full work, but J has a second horse and not enough time for both of them. Which means that I’m lucky enough to get to half lease him! 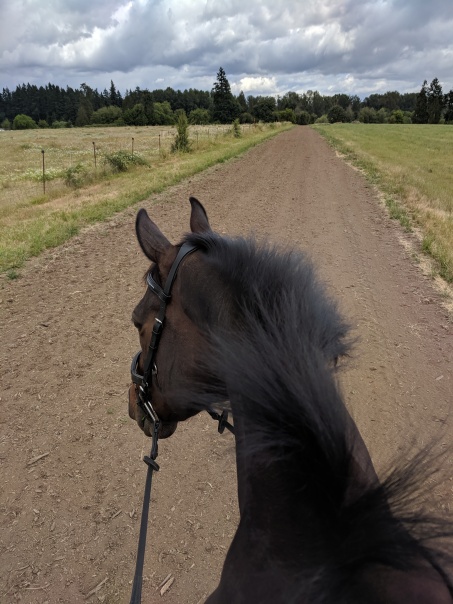 also cannot wait to tackle our 1200m gallop track with him!

It works out perfectly for both me and J. She’s busy, and I’m flexible. If she can’t make it out, she just lets me know and I’m happy to make the time to ride him. If she wants to show him, it’s not a big deal for me to cancel a couple of rides, and she’s been great about giving me extra time on Timer after a show. If I want to show him, she’s happy to have me get him out! J is really super encouraging and very excited for me to take him out to a show. It’s kinda a half lease dream, honestly. I am SUPER excited.

Timer is quite literally the nicest horse I’ve ever had a chance to ride for more than one or two lessons/pony ride type things. He’s basically a Novice packer, and J is working on getting him back up to Training level this year. He’s particular, but he responds really well to good biomechanics and good riding. And TrJ knows him inside and out — literally all I have to do is what TrJ is telling me, and I can fix any problem on him. T is a quirky fixture at our barn — he’s talented and funny and fast and well known and sweet and sassy and awesome. I can already tell that I’m going to learn SO MUCH from him. 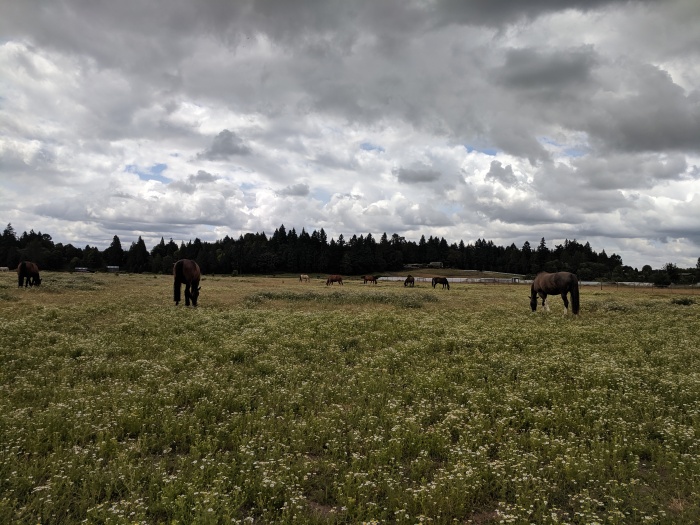 a pasture full of brown horses

I’ve only had the chance to ride a handful of times so far, but I LOVE sitting on this horse. HE GIVES ME SUCH A GOOD FEELING. For real. There are times he’s a bit strong or it’s clear that my cues are not the ones he’s used to, but time and lessons will fix that. And he is a fabulous ride. He’s comfy and feels fancy and despite being particular, is actually pretty easy as long as I don’t do any weird shit or pull on him all the time. I’m sure I’ll be humbled very soon, but for now, he’s perfect.

You know when you’re a kid (or a teenager or a young adult or whatever) in a barn, and someone else gets given the lease/ride on the nicest horse in the barn or your trainer’s favourite horse? (And maybe you’re kinda jealous and butthurt because why wasn’t it you?) I’M FINALLY THE ONE WHO GETS THE RIDE THE FAVOURITE HORSE! And it is awesome. 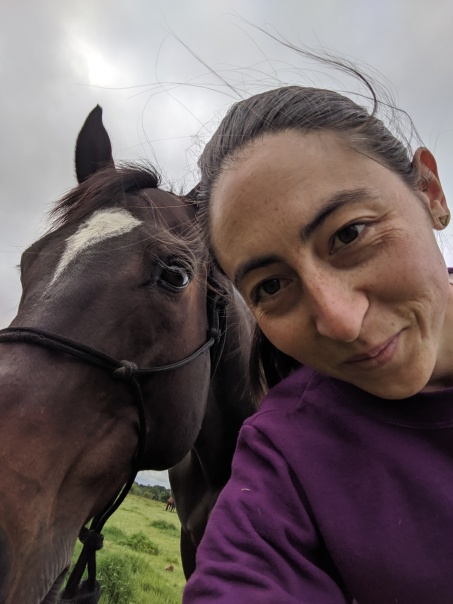