Skip to content
finally checked the camera traps again and caught some adorable coyote shenanigans over two rainy nights this spring. 🐺
Adventures this week include: six trips to the irrigation store (including a new irrigation store!), three trips to other parts stores, taking apart and servicing the irrigation filter (actually super proud of this one), overheating and subsequently servicing the Kubota (less proud of that one), phone calls with four service reps, flipping a big-ass electrical switch a la Jurassic Park, discovering that Justin Beaver might actually be Justin Nutria (devastating), getting purple primer in my mouth (slightly burny), and a very small chance that I put 4000 gallons of water into the ground somewhere under my irrigation system potentially creating a sinkhole (or underground lake, oooh! anyway tbd on that one).
I love how cauliflower leaves always wrap the growing flowers up like *it's a secret*.
poblano gimlet

One of the hardest things about adapting to PonyLyfe has been actively working to not ride Sammy like I rode Murray, and training my brain to not expect him to ride like Murray. (It is a little embarrassing for Murray that I’m a skosh unseated by the pony’s relatively “big” gaits though.)

This has been the biggest problem in jumping, though of course it’s come up in dressage too.  Our first few jump lessons were super easy and straight forward, and I didn’t try to put too much buttprint on the pony anyway. I pretty much just pointed him at the fences and let him get us there, which worked well for him. The courses weren’t terribly complicated and I wasn’t fussed by a deep or long spot so I just went with it. Then around my third jump lesson I started to be like “wait just one darn minute, I get to have some input on how we get to those fences!”

exhibit a: Nicole is very good with a braced hand

That’s when the trouble started, of course. When I insisted that we not just bomb around at the fences, Sammy was like “ok well that’s not actually part of the agreement, which means I don’t have to do my part either.” Mostly he didn’t stop dirty, but a couple of times I thought we had a pretty good step to a fence and he was like “NOPE”. Luckily for me, this coincided with a couple of frigid, snowy weeks in early March when most people weren’t making it to Sunday group jumps, so I got several private jump lessons (for the price of group jumps – yay!).

We had two main problems. Number one, that I couldn’t figure out how to get the pony to slow the fuck down. Number two, that I couldn’t figure out how to shorten his step when we were coming up to a fence because of number one. To fix number two, I kept trying to sit down into the pony coming in to the fences which would be when Murray naturally shortened his step. This made us both jump super awkwardly. To fix number one, I basically yanked on the pony’s face for dear life, because I had zero other tools in that particular kit. It’s what I get for riding a super sensitive push ride for five years. 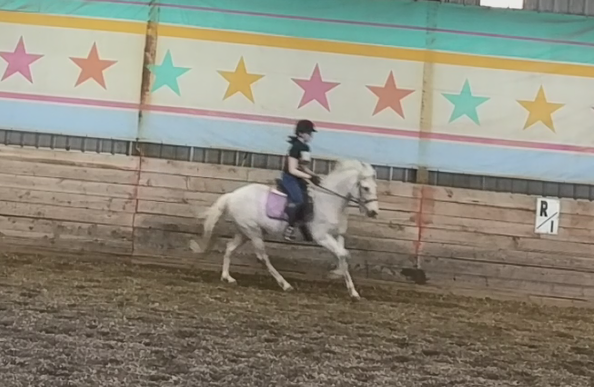 TrJ fixed number two first, then tackled number one. The fix to number two was basically: keep a lighter seat, don’t drive to the fences. Just a matter of practice. The bigger fix came when we started to get the speed issue sorted.

Because of the way Sammy was like “just don’t touch me approaching the fences”, I was feeling both too fast, and out of control, and like I had no influences over what was going to happen. Which just made me go *grab grab grab* at his face more, and resulted in stops. TrJ emphasized that I really need to get my step on the turn to a fence, and approaching the fence just stay steady. Sammy can be trusted not to BARREL down to a fence and then get on the forehand and stop, but he can’t jump if he thinks you’re getting in his way. And if I didn’t get my step around the turn when I asked for it quietly? Add a bigger half halt until I got the step.

this is SUCH HUGE PROGRESS for us

Once I started to figure out how to stop just hanging on one or both reins to ask him to slow down, and making it clear that I really mean it when I ask for him to slow his feet down, all of my half halts got more effective.

Sometimes when I’m riding the pony I feel like such an utter n00b. He weirdly manages to make me feel like I don’t know how to keep my leg on or my hands following or stay up in a two point, and I’m just flapping along like an utterly out-of-control pony rider. Little bits of progress like this have made a huge difference to our rides, though! And for all our struggz, this little guy is making my butt way more educated.

6 thoughts on “changing my buttprint”