This post was going to be all about how well Murray is settling in to his new barn. And it kinda still is.

We had two really nice rides last week. On Thursday after he arrived, I figured I’d get on Murray for a little hack around the indoor so we could blow some steam off. Murray was wiggling and jiggling at the tie (which happens to be right next to the kitchen where his grain is prepared) and my new trainer (J) suggested I take him to the indoor and turn him out for a few minutes.

In the indoor, a lovely teenager happily opted to give us the space so we could have some crazy time and she went outside for a quiet ride. Murray ran all around, rolled, shook off, snorted 3 times, and cantered around some more. J came in and watched us, laughed about Murray being “definitely a thoroughbred” and complimented his cuteness.

I was definitely worried that Murray would be too much, er, Murray for a new barn. But everyone has been super understanding, accommodating, and welcoming. It’s awesome. 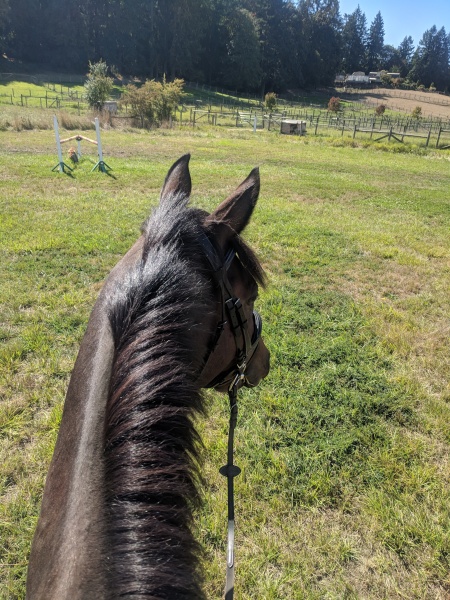 After a quick run around, I tacked up and got on. We cruised all over the indoor and did a little bit of w/t/c, but not so much that Murray was like “eff this place that makes me go on the bit all the time.” That evening we even got to have a little turnout so that someone wouldn’t be too bananas.

cute pony i found at my new barn! i will steal her

On Friday morning, a group of riders were headed out to the back field to ride and asked if I wanted to come with. To which I responded an enthusiastic YES. The back field is super cool — probably 20+ acres of pasture with a gallop track (about 1200m) and grass jump field. I took one look at it on my tour and was like “yeah I’m getting bucked off out here.” To add to the openness, you have to walk down the property line past a whole bunch of hoop houses owned by the neighboring nursery, and there are cows and goats in the pastures adjacent to the field.

murray is skeptical about hoop houses

Murray was a dweeb all the way out there, pushing past the other horses then trotting sideways down the lane. When he saw the hoop houses he took a hard look at them, but I just kept pushing him forward. The lane was somewhat narrow so we didn’t really have much other option, and the last thing I wanted him to do was stop and back up into another horse or the hotwire of the mare pasture behind us. Fortunately, once we got to the field Murray was much more interested in something else.

We walked around the dressage court, grazed, looked at some fences, grazed, did a little trotting, grazed, cantered, grazed, chatted with new friends, grazed.

You get the gist.

Murray was much calmer walking back down toward the barn, so I hope that after a couple more trips out there he’ll think it’s old hat!

When I was untacking, I noticed that a bug bite on Murray’s belly from the day before had pitted under the girth and made two boob lumps. Which was weird. But I assumed that it would go down, since Murray has had allergic reactions to bug bites along his belly before.

But then on Friday, the lump was bigger. And on Saturday it was even bigger.

On Sunday we called the vet. She came first thing Monday.

Most of the lump is just pitting edema. But there was this one sensitive, firm section that she thought might have some fluid in it. So new vet gave Murray a second dose of sedation and aspirated the lump, which spat out some pus. Yay.

For those of you familiar with California horse disease, this is not looking great. It’s a tentative pigeon fever diagnosis, but the sample got sent off for culture.

We cleaned out the one abscess and couldn’t find any others. And it was pretty clear what was abscess and what wasn’t — Murray was cool with you thumb printing the pitting edema all over, but on the abscess site he was kicking his belly with shocking accuracy. New vet put Murray on antibiotics, and he’s now on stall prison until we get the culture back and the abscess site closes.

And of course, I can’t ride. Because the abscess is right where the girth goes.