I find myself approaching friends and acquaintances and asking if they have time to come to a clinic I think they’ll really love — there will be coffee and donuts! — so they can learn more about my dressage lord and saviour: biomechanics.

But I don’t think this is entirely invalid! We had another biomechanics clinic with Alexis Martin-Vegue this weekend, and there were seriously some minor miracles in that arena. Alexis coached one rider into shaping and balancing her horse enough that he went from lame (not NQR, not a little uneven, lame) to sound. Actually, she did it with two different horses. She had riders turning pony tippity-tappity canters into real, proper canters. She revealed that my horse is way more forward and willing than I ever realized.

It’s pretty cool to watch (and do).

The thing about the biomechanics lessons is that each ride is so individualized to each rider that it’s hard to draw sweeping conclusions across the whole clinic. (My lesson was also totally different and was more about training theory and improving my horse through clarity.) There were a few things that Alexis mentioned to more than one rider, which I managed to retain (somehow).

This is along the lines of having you influence the horse instead of getting on and having the horse influence you. When your horse zips out from underneath you, you can’t fix it by making your post less high — that just makes the steps smaller, but the same speed (steps per minute). This might feel like slower movement/lower velocity (velocity over the ground = size of steps x steps per minute), but it doesn’t improve tone or reach or throughness. Instead what you want is for the steps to stay big, but for each step to get sloooower.

Alexis repeated a couple of times that it’s really okay to get bounced onto the wrong lead (or maybe even sit your horse a little off balance) by doing this. It’s communicating to the horse that the zipping isn’t what we’re going for, and encourages their legs to move in time with the post. Bigger, slower posts == bigger, fancier trot.

little miss zippy after she accepted some bear down and connection
all of these pics are from last time — i just took videos on peoples’ phones this time!

A lot of riders (me included, still!) weren’t completing the arc of the post. If you think of the knee as the fulcrum, the pelvis should make an eight of a full circle arc from the seat of the saddle to over the pommel. Lots of riders skipped the top part (me! I think that’s what I thought of as “posting smaller” or “posting slower”) or the bottom part (hovering a bit above the saddle, also kinda me). Or both.

Alexis didn’t want rider slamming into the bottom of the saddle, but she wanted them to land and rise purposefully and fully. No bouncing off the bottom or hovering or avoiding the seat of the saddle. Full posts, up and down. I think I talked about this last time too.

arrow pointing to the center of the circle/the fulcrum, arc showing the motion of the post

One rider had a horse who really wanted to suck her into the back of the saddle and behind the motion. Alexis called this his “man trap” — the place he wanted people to sit on his back so he had to do the minimum work and the rider just got somewhat drug along.

This was a really interesting case because the rider couldn’t bear down into her horse until he’d come up to meet her. So she had to lift him with her thighs (I don’t really know how she did this part because I’m not the rider, and there’s only so much you can get from watching) until he gave her a place to bear down into, and then she could really sit into him.

This part was the funniest because Alexis kept saying things like “you need to pull him along by his man trap” or “get out of the man trap”. It was awesome.

Emphasize the upswing of the canter

This one has been big for me and is a constant battle, so it was especially cool to see how this affected other people and their horses. In the canter, after the horse lands the outside front he progresses through to landing the inside front the rider’s seat sweeps across the saddle. This is the down swing. Then, as the horse picks up the feet and pushes off the inside front, the rider’s hips swing back and close a little. This is the upswing.

Too many riders really emphasize the down swing — it’s easy to do so. When you start to really sit into the canter, this is the easiest part to sit into. Alexis wanted people to spend more time in the upswing, bringing the hips back and closed with more energy and pausing in this moment. Another way she described it was reducing the sweep across the saddle for the rider. So the rider just stayed with the horse in the down swing, and then held the horse up in the up swing. This is what turned the ponies’ canters into true, cadenced canters, and added a bunch of jump to the canter of the more advanced horses.

spend more time in this moment (or just before)

The fixes that Alexis puts on riders can feel really dramatic. A lot of this seems to have to do with going against the asymmetries your body wants to have, as well as being encouraged to access deeper muscles that you might not normally access. But for most riders they weren’t dramatic, and were designed to be very digestible and easy for us to remember. Moving the heel back one inch, sitting another centimeter toward the center of the saddle, looking toward the outside ear instead of the inside ear. And these little things can totally change how your horse goes.

On the other hand, when riders try to fix their own asymmetries they also tend to way over-do it, and instead add on new and different asymmetries. I’ve definitely never done this. 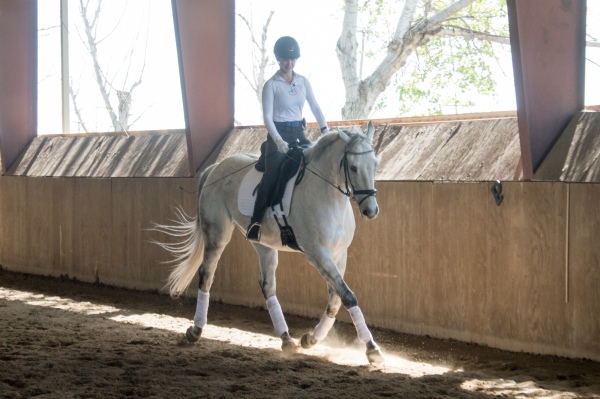 The best part of it was that everyone had a really great time! There were very little ass-pats and good jobs and “do it again, but with more angle”. It was hard, but it’s the good kind of hard. And Alexis does an amazing job of breaking it down so that riders can understand, implement, and retain all of the different pieces.

So: do you have a moment for me to tell you about biomechanics?

7 thoughts on “have you heard the news?”