When Kate came up and rode Murray, she described him as trying to “shake off” the aids. When she put her leg into him, he wiggled or squirmed or maybe even kicked out, but didn’t necessarily go forward. Which is the whole point of putting the leg on in the first place. Megan pointed out that sometimes in response to leg Murray just pushes his ribs back into the leg — which is something I have felt before, but never had anyone identify it to me so I didn’t know if I was being crazy. These are such perfect descriptions of my horse’s behavior, though. He’s totally not being malicious. He’s just problem solving in a (for me) unproductive way.

no Kate, NO, you may NOT put your leg on me, nooooooooooo

In the last two months or so I’ve worked hard on pushing through those instinctive responses of Murray to just flick me off when I go to apply aids. It means pushing through my own instincts too. Because when Murray starts to get a little wiggly or sideways or offer up the wrong response, my go-to is to let up and try again. Which inadvertently tells Murray that he should repeat that behavior, because it resulted in a release of the pressure. So instead of letting up I have to keep my leg on and wait for the right response, or something resembling the right response, before I let go of the aid.

Even though he’s  learning rapidly and incredibly well lately, it’s still in Murray’s nature to shake off an aid he’s not totally in favor of. 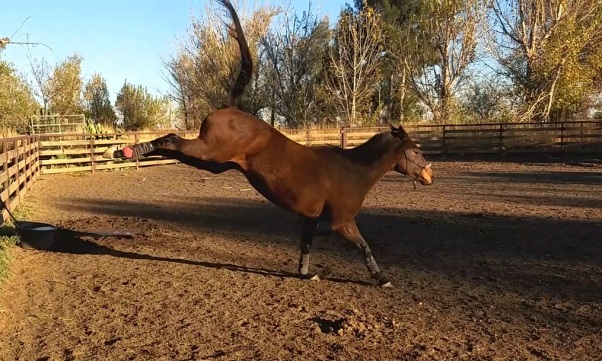 For example, sitting through the canter aid, which Kate suggested would help Murray understand the distinction between leg = bigger trot and leg = canter. Though I only use one leg for the latter and both for the former, sometimes it’s easier to canter rather than trot big. So this should help clarify that. Murray’s thoughts on sit-sit-canter range from THIS IS NOT ACCEPTABLE to ugh fine. We’ve been getting less offended flailing and more acceptance though. The other thing I noticed is that my first attempts at this lost all of the bear down, and I inverted in the middle and arched my back through the aid and transition. If I’m inverted through the transition, I can’t imagine that it’s easy for Murray to be round through it. So I focused on bearing down and shortening my front line through the transition, and it did seem to improve things. 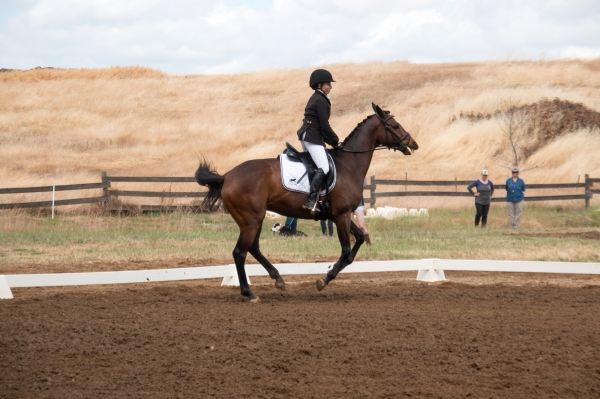 Then there’s connecting to the left rein. He’s always lacked connection to the left rein, as we both tend to just rely on the right rein for… most things. Megan directed me to really keep that left rein connection when it’s on the outside and push Murray over into it with my right leg. And in response, a couple of times Murray has flicked his head to the outside, turned left, or just stopped and gone backward. Which is, sorry kiddo, not what we’re looking for.

And then I caught myself doing something SO MURRAYish it was embarrassing. Though it’s somewhat torturous to do it, I’ve been forcing myself to improve the connection and march at the walk  before I move on to the trot. It doesn’t have to get perfect during the warm up, but it does have to move toward being more marching and through than when we started. A lot of this means finding out where Murray wants to start in the connection, and adding a bit of leg for more march and connection, and asking for a bit more roundness, having him bend properly instead of rotating around his inside front leg, then adding a bit more march and connection, etc. And after I added leg and felt Murray push into the bridle a bit more, I did something with my hands to shake him off the contact. I don’t recall exactly what it was, but that’s hardly important. No wonder this horse doesn’t want to take or trust the contact — if I’m not thinking about it, I might actually tell him to not do the right thing. Oops.

oh hey, apparently a year ago i briefly learned that short reins make my horse look way better. i clearly promptly forgot it.

Yet another example of how I am, truly, just like this horse.

So lots of things to focus on, and lots of dedicated practice needed for our rides. But it’s getting a little better, bit by bit. And once I stop accidentally shaking my horse off the aids, it will probably get better a bit faster!