Winter arrived late this year, or perhaps it returned from a temporary hiatus to Hawaii, and about five weeks ago it suddenly became frigidly cold and then started pouring. Which is normal winter weather but after days approaching 70 felt like a really nasty trick by mother nature.  This coincided with ramping Murray back up into work and trying to get fit for the first show we could possibly make it to this year, April Fresno. (A show which is horribly, terribly coincidental with Kentucky 3DE,  so…. I will be following the live tweeting I guess?)  This has kinda made our hiatus longer than expected, but not terribly so; and I’m trying to put the work in regardless.

I expected Murray to be a) super unfit and b) really unhappy with the getting-back-to-work situation. But I’ve been really very pleasantly surprised.  He’s happy to come to work, and pretty happy to listen t me during work. I mean, he’s still Murray. He still bucks and screams and exorcises the bad feelings by shooting them out of his butt.  But when he’s not doing that, he’s working.  Even better, we’re working together.

And boy-o is way stronger and more muscular than before, especially through his topline. To which I can hear you saying “woah woah woah now Nicole, you let your horse languish in a stall and pasture for 20 weeks and he got more topline? now I know you’re smoking the ganja”, but I’m not. I swear. Sure, he’s a little huskaroo right now. But I found a conditioning program (by the fabulous Jec Ballou) pretty early on that emphasized walking, stretches, and calisthenic exercises (poles) to help a horse keep topline and fitness during downtime. And I did it. Scientifically. I have walked my horse over so many freaking poles this year, probably more than in the first four years we were together combined.

Oh, and poles. We can do them now. Not like “I can hurl myself in a disorganized and inconsistent fashion at these sticks on the ground and hope it turns out all right oh GOD ITS NOT ALL RIGHT HELP”. More like “I can trot to these poles at a steady pace and if I need to stretch out over them I can push from behind”. This is a horse who chipped into trot poles literally 50% of the time from 2013-2017. Not kidding. And now he trots calmly toward them, and, unless there’s a huge question or some kind of majorly weird thing going on, just trots right through them. WITH HIS HEAD DOWN. 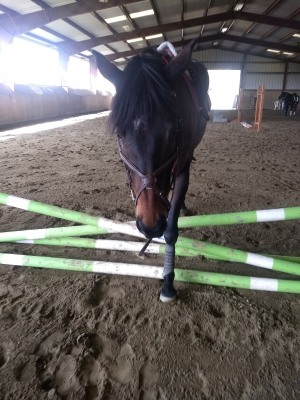 will walk over x-rails for treatz

Murray now has way better longitudinal balance, and his lateral balance is getting there. I worked pretty hard to reward him for walking and trotting around while stretching over his topline, so now it’s something he just offers to me because he knows he gets cookies for it. It’s like the lunging and liberty work doing this unlocked his ability to actually use his back and his abs — both on the ground and under saddle. He trots around in a halter (on a lunge or at liberty) with his head down, stretching over his back now. It’s the best trick ever!  (I think this is part of what helped him with the trot poles, as he can problem solve without needing to tighten his back line and tense up.)

And his tail grew. I know it’s a big thing but I’ve lamented his thin and somewhat sad tail for a while now. I vowed not to bang it and to be very careful brushing it while he was on stall rest so that when we got back to work I’d have this big reveal of LOOK MAGNIFICENT TAIL!  A new pasture buddy foiled that plan by chewing half of it off at his hocks in December, and then the rest of it got so long that Murray started stepping on it and pulling it out in his stall.  So I banged it and gave him some light layers, and it still looks thicker and fuller than before, if a titch shorter than I might like. 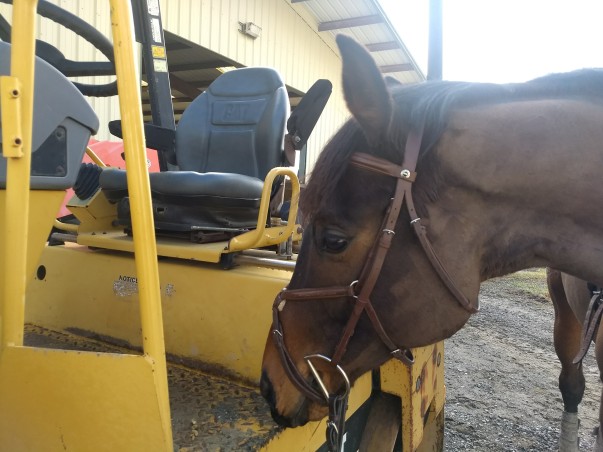 also: less spooky and not afraid of strange heavy machinery any more

It’s hard to enumerate the benefits we reaped over our 4.5 month break. I expected to have a long uphill climb after taking the time off, but it’s just… not the case. Murray came back sounder, smarter, and happier to work, and I learned a lot about riding, training, and how to teach my horse. Which is kinda crazy to think about, because I feel that we were in a pretty good place even before we went on hiatus. Murray had just saved my butt all over Camelot, and we were hammering out some pretty essential riding/training kinks. To be feeling better than that is pretty baller.

Don’t get me wrong — I have also learned (and continue to learn) about some of the (many) fuckups I’ve made in training this horse over the last four years (see above re: can’t do trot poles). But I also feel like this break showed me how reversible they are, and how to avoid making them again in the future. So… if I make more mistakes it’s okay, we’ll just fix them.

It’s good to be feeling good!