Shortly after January’s Spiral of Nag ride, I did what any confused amateur would do: I scheduled a lesson with my trainer, and complained to my friends.

To recap: I discovered that my horse does not reliably trot forward when I cue him to do so. Depending on the day and where we’re at in the ride — warming up, going good, at the end of the ride, feeling super lazy — I get correct responses between, probably, 30% and 85% of the time. But other horses I ride can trot on cue.  Like, all of them. All of the time.

So the goal of my lesson was to help me become super aware and super accountable for the trot transitions. I told B to be extra critical of what I was doing with my body so that I could give the same cue every time and help Murray really understand the antecedent-behavior-consequence chain that I wanted.

Unfortunately, the lesson was a little doomed from the start. Murray had slipped out of his blanket at some point overnight, and the weather was unexpectedly frigid.  Not unexpected for the season, but shocking given the 70* days and near-50* nights we’d been experiencing.  So Murray was cold, tense, and cranky when I got to him. 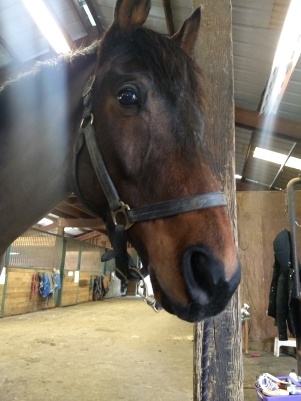 Murray and I demonstrated our weaknesses very quickly. B called me out immediately for throwing my body around when Murray didn’t step into the trot immediately.  It turns out that I have zero patience.  If Murray didn’t show some upswing in power within a step of me squeezing him with my legs, I would throw away the contact, pitch my body forward, and lift my seat.

B coached me through increasing the ask (more leg pressure) without flailing — giving a stronger squeeze or even a bit of a boot — while sitting tall, keeping my hands steady, and sitting in the saddle.  Which is… embarrassingly hard for me.

Murray was not a fan of this. He was happy to trot off on his own schedule, but doing so when I asked was not really working for him.

We made good progress in the lesson, but it got a lot uglier before that.  B kept encouraging me to stay tall, and quietly urge Murray to go forward, without letting him use balking or ducking behind the contact or fishtailing around to evade the work. I had lots of homework from the lesson.

evasions: we have them

On the friend front, Kate was an awesome, sympathetic, and encouraging ear. Sure, my horse doesn’t have a reliable walk-trot transition, which is something that much greener and much younger horses have long mastered, but now that I’d identified the problem, wasn’t this the perfect time to work on it?

She suggested that for his current level of training (or like, whatever it is we’ll call it that I’ve been doing with Murray for the last four years) I make my cue a squeeze of 1-3 seconds and expect a response within 3 steps.  It’s not too extreme, but it is reasonable for the level of work that we’re trying to do this year.

Operationalizing the behavior was amazingly helpful. It gave me a quantifiable target for what I wanted to get out of Murray, and something I can count to see how close we are to getting there.  It’s impossible not to struggle with observational bias when the improvement or behavior I’m looking for is subjective — what is “better” anyway?  But when I can count mississippis and steps, then I can tell exactly how much progress we’ve made and how far we need to go.

Murray, for his part, remains the extra creature he’s wont to be.