Murray and I have really been struggling with finding some balance lately.  And not just literally, though as he comes back into work and the world of derpssage it’s clear that his lateral and longitudinal balance are not what they once were.

We seem to ping-pong back and forth between states — not necessarily extremes, but not close enough to anything consistent that there is any kind of meaningful stability there.  It seems to be the case in all aspects of our relationship too; not just work under saddle. 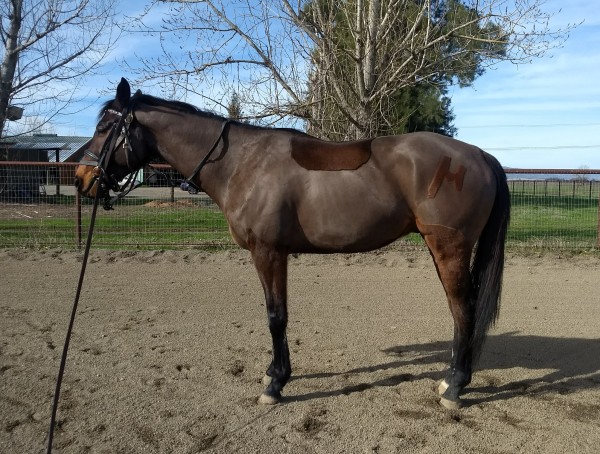 in the meantime, I will appreciate this accidental super-square halt on the lunge line

After a really good run of fantastic behavior on the ground (with a little blip around clipping), Murray decided to throw down regarding bridling, of all things.  He’s been getting fussy and punky about bridling, and I changed his bit to a flexible (but thick) rubber mullen over the weekend.  Murray spent most of the time in that bridle gagging on the bit and attempting to spit it out, though he would happily stop long enough to chew, and seemed quiet enough in it when was were walking and trotting under saddle.

On Monday, he girthed up fantastically. We’ve been making great, incremental improvements day by day with the girthing up post-clipping. We’re actually back to where we were pre-clip: we can do the girth up to the second hole on each side (very light pressure, but not literally hanging loose below his belly) while tied, then take a short and well-behaved walk to loosen up.  We returned to the tie, and after putzing around over a few things I held the reins up for Murray to put his head through.  He fussed and procrastinated but eventually complied (click and treat).  But when I took his halter off and tried to slide the bridle up over his face, he pulled his head back and shifted his feet around uncomfortably.  I waited for the shifting to stop and for Murray to settle (click, treat) then came over to his head to try again.  It went on like this for a few more minutes, so I put his halter back on and tied him up, walked away for a few minutes as a time out, then tried again.

I tried again, taking the bridling much more incrementally: click for standing still, click for letting me put the bridle to your face, click for letting me hold on to your face, etc.  Murray just was not playing ball, and his objections got louder (jerking his head away) and ruder (pushing through me and into me).  I threw in a mild correction (jerked the lead rope once) in response to him jerking away and tried again.  No dice.  I tried to disengage his hind end (risky in the barn, as he tends to slip on the asphalt) when he pushed into me, but that also did not result in any less pushiness.  Eventually we had to take it outside.  It was not pretty.

I truly could not understand what precipitated this.  We went from listening, thinking, and learning to nopenopenopenopenope in less than a minute. Was it about the bit (which he now seems to like?!)?  Was it about his desire for an extra long walk after saddling? Was it because someone had pulled up in a trailer and he wanted to watch?  Was he mentally over it after a week of solid work (but he got Sunday off, and Saturday was pretty mellow)?

Because we have been working.  Mostly at the walk and trot, with a few cancer circles thrown in for good measure and fitness.  Lots of walk poles, a few trot poles.  On the one hand, the work is easy — we’re walking 75% of the time and working on quiet, balanced trot transitions and a steady trot for the rest of it.  It’s not physically demanding work.  On the other hand, I’m literally trying to re-engineer the way Murray thinks, learns, and goes from the ground up.  And that is mentally quite tiring — at least, it is for me.

we can rebuild him! make him faster! stronger!

Part of the reason the work has stayed so low key is that Murray is still vacillating between “pretty sound for a horse who hasn’t done fuck all since September” and “holy shit why does that leg move like that”.  Is it muscular?  Maybe.  He works out of it a lot.  Is it inherent imbalance and tendency?  Probably.  He’s always taken a shorter step with his right front, and I’ve always overcompensated to even him out (or maybe just made it way worse with my incorrect turning?).  Is it because it’s winter?  Maybe.  My horse always seems to go like crap in winter.

After the whole leg hole situation, I find myself less resilient to the little physical-ailment-type bobbles that horsey life throws my way.  Watching Murray be a little short on the right front or dig he toes into the footing instead of step heel-to-toe makes me much more worried that something serious is going on than it ever used to.  Where once I could brush off his winter funk as just stiffness and general malaise, I’m wondering if maybe I should turn him out in a pasture and leave him for a month or two.  Is his right hind still bothering him, causing him to favor his other limbs even more?  The wound is completely closed, but his leg is still reforming, reshaping — tightening up and dissolving scar tissue.  Maybe he just needs more time?  Or maybe Murray will feel much better once he gets into regular, full work, using all of his muscles in better balance.  That’s an option too.

I just can’t seem to pick a path and stick with it. 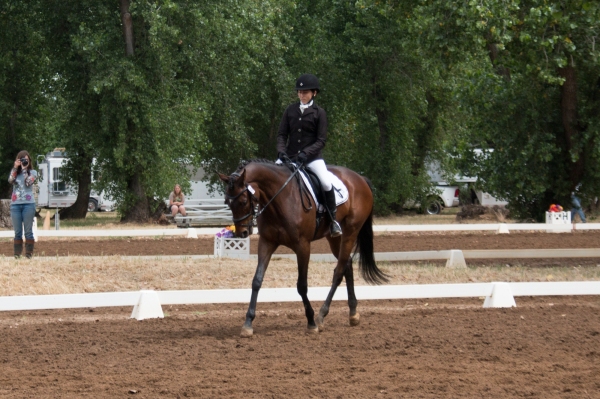 I’m trying to find a middle ground here — somewhere that I’m not either treating my horse with kid gloves or ignoring what he’s trying to tell me or letting him walk all over me or driving us both insane with the monotony of walk-trot-walk-trot-walk-halt-walk-halt-walk-trot purgatory.  It’s hard when things change so wildly day to day.  It’s like I’m wobbling on a bicycle and I can’t fix it by moving my feet or the handlebars one direction or the other; the only thing that will fix it is picking up speed.

It is me, so I have a bit of a plan.  I should probably write it out and have targets to measure it by — otherwise I seem to get stuck in those death spirals (of nag, of walk-trot forever, of clicking my horse into awful behavior). Hopefully that will help us find that balanced place in the coming weeks.  How do you do it, when you’re seeking balance?  Any hints for a wayward traveler and her meandering steed?  I’ll use any toolkits you can give me.