I haven’t written a barefoot update in a while because progress on the barefoot front has slowed down.  With the rainy season beginning in earnest, Murray has been stuck in his stall with minimal turnout.  Less movement == less progress. I’ve actually seen a little regression with his gaits, which is a bummer.  But his feet have still made some nice progress, and next week marks 12 weeks since  started on this whole barefoot adventure.

We’ll start with the left front. It’s so much more straightforward than the right front…. though more problematic, in some ways.

The angles aren’t exactly the same, but Murray’s toe is a little shorter and his heel is way less underrun now. As in, he has a heel!! The hairline is also even now — no more dip in the front! 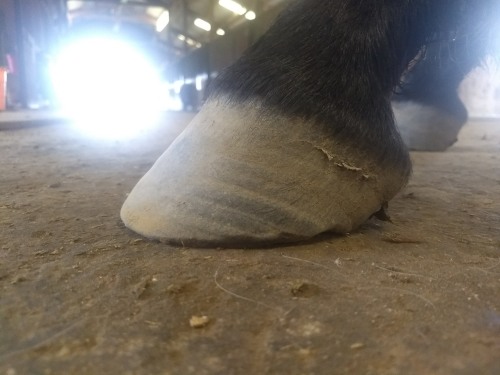 Best of all, there’s a pretty significant change in angle in the new growth on this foot!  I traced the new growth (and extended it down) in orange, and traced the old angle in red. We will have a much, much healthier foot if that orange growth continues down to the ground! 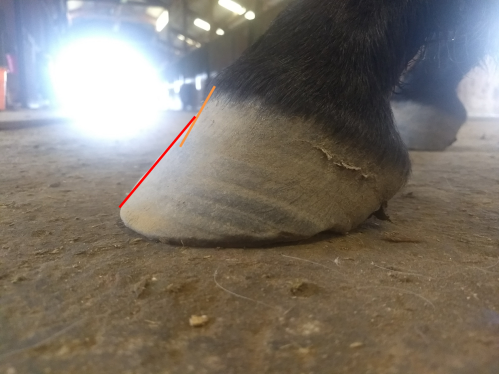 Murray’s LF sole has also shown some pretty significant changes. I had my farrier come out for an inspection/trim this week, and she took a little bit off his toe and clipped away some funny, flaky bits coming off his sole. (I have before/after pics for the RF, but the before pic of the LF is really blurry so I didn’t bother uploading it.) She was very happy with his progress so far!

Let’s talk about all those neat changes!  I created all of the reference measurements on the October image, then superimposed them on the January image without changing the size.  So I could make accurate comparisons, duh.  First, the frog is much wider.  Probably 10-15% wider, which is awesome!  You can’t tell in the picture, but the collateral grooves are also deeper.  These have been steadily getting deeper over the last 12 weeks, as the foot gains concavity and the frog gains depth.  The heels have also widened (purple bracket), and the toe (blue bracket) has shortened!

Murrays RF has also made some good changes, but is going through a much scarier ugly phase than the LF right now when viewed dorsally (this picture was before the trim, it’s slightly less scary now).  But he’s not unsound — well, no more unsound than he was before I pulled his shoes! — so I’m going with it.  And here’s the thing — and it’s weird, so bear with me.  This foot is now wider at the top than it is at the bottom.  The top half inch or so of new growth is wider all the way around the coronet band.  Farrier thinks (and I fervently hope so!) that the wider section will probably continue to grow like that all the way down, and we’ll just end up with a bigger hoof overall!

The sole is much less terrifying than the dorsal view — here’s Murray’s foot in January pre- and post-trim. 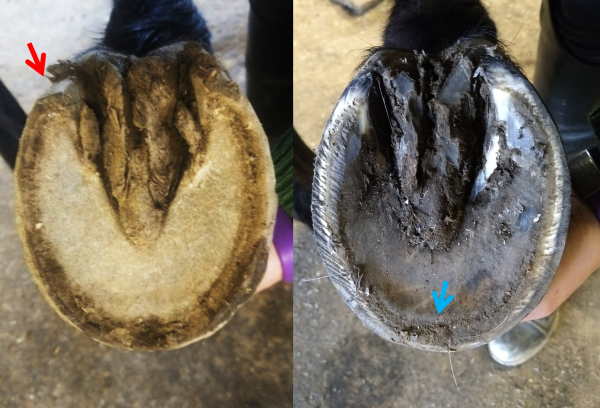 That excess heel (red arrow) is what my farrier trimmed off during the appointment.  And the blue arrow shows his brand new breakover!!  Murray’s never before had a breakover that wasn’t, you know, his shoe.  Confession: I actually thought that might have been his coffin bone falling out though his sole at first, because I’d never experienced a barefoot horse’s breakover before.  I was quickly informed that he would have been crippled and hobbling were that the case.

Sole comparison shows a lot of heel expansion (purple bracket), and a longer toe (blue bracket). Lots of people wouldn’t be excited about a longer toe, but I am!  This foot needs a little more shape to it, instead of trying to be a cylinder.  And as before, the frog has expanded and much more of it is in contact with the ground.  He’s a touch footy on the RF after the trim, but I suspect that will go away in a couple of days.

The caudal shots this month all came out crap, so I’ll probably just give them another go next month (with more light maybe?).

At the beginning of this month I started Murray on a ration balancer formulated for our area, which should help his overall vitamin/mineral balance and contribute to overall better foot health.  I’m also considering switching him over to pasture board, but haven’t decided yet.  I’m not sure that Murray would love it, but he isn’t loving being stuck inside right now either.  So… we will see.

The barefoot experiment continues for now!