Riding has been a bit off and on lately.  The smoke from the Napa fires sometimes gets pushed south into the Bay Area, and we have great air — so riding is on the table.  Sometimes it creeps over the hills and fills the valley, and to help preserve everyone’s lungs I cancel my rides.  I don’t think anyone minds the schedule.  Especially since there’s newborn puppies to stare at in my barn manager’s house!

I also took Tuesday off and volunteered at Napa Valley Horsemen’s Arena.  It was one of the evacuation centers for livestock during the fires, and they are happily starting to empty stalls.  Stalls West must have hustled up and dropped stalls off really quickly, because I recognized stickers from Camelot on their temporary barns.  The operation ran really smoothly.  As one might expect, the morning was the very busiest, as we took temperatures on every horse (with some not-totally-reliable ten second thermometers) and mucked and fed.  There was a big lull around 1 when we were done with all the urgent stuff, and so the veterinarian directed us to turn a couple of big mares (who had been stuck for a few weeks in mare motels) out into a free arena.  The girls trotted around a bit, rolled about ten times, and were not unhappy to come back in.  We considered turning out other horses, but as some were very hard to catch even in a mare motel, and I had no idea about the soundness or restrictions on any of them, without direct vet supervision I was uncomfortable with that plan.

We also helped load up a bunch of horses and a couple of pet steers to go back home, which was awesome for them.  Lots of people have been released to go home, and while a shocking number of structures were lost, because of the shape and size of the fires, many who were evacuated were spared.  The facility is switching over now to keep their sights on long-term care of the animals who won’t be able to go home — for perhaps months or years, as the infrastructure (wooden bridges or electrical/gas conduit) is rebuilt.  It’s going to be a long haul for some people, and I’m so glad that the community stepped up to help.  I’m really glad that we’re seeing the end of these fires too.

On Wednesday I got back at it, and had a lesson on the mom-bod mare (now MBM) with B, as I’ve not been able to get her to canter left for… a week or so.  Oddly enough, B told me that she had never gotten MBM to canter left, only right.  So I’d somehow unlocked something in there in previous rides, only to lose it.

MBM was a little up and not listening to my seat as much as she usually does, but it was fine.  B had me slow my post way down and I half  halted through my thighs, and we got back in tune.  She is definitely one of those horses who gets tense, braces, and rushes when she’s confused or off-balance.  Thinking about tempo and getting her comfortable with moving her body in different ways is going to be key here.  But I was very pleased to feel that her steering was vastly improved from my last ride, where we fought about turning left at the wall for a solid ten minutes. 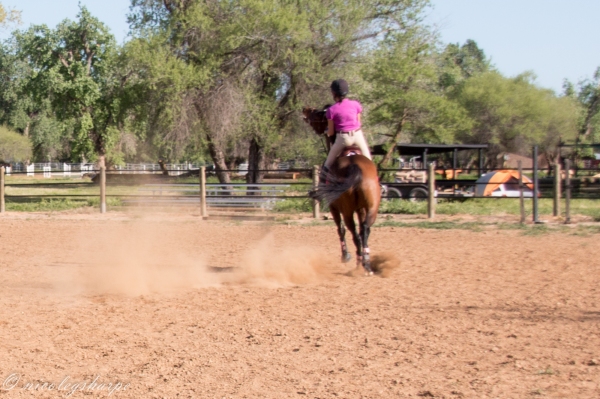 throwback to when Murray couldn’t turn left either

We tried a couple of canter transitions and I only managed to get the right lead, so B suggested pushing MBM’s haunches in a little.  That was the trick, and we got the left lead on the first try.  The super neat thing here is that I’m now experienced and subtle enough that I could push her haunches over just a little, even with the mare feeling a little bracey and rushed, and not over-do it or get weird about it.  MBM immediately locked herself into “race mode canter” and whizzed around the arena while I tried to get her back underneath me and listening.  I could feel myself bracing in my heels and letting them get ahead of me while I tried to half halt with my hands and actively fought that position, but it’s hard when letting the reins loosen and getting your leg back under you just results in feeling like you’re going too fast and have no hands on the wheel.

The trick was turning MBM into a 20 meter circle so she didn’t have the long sides to use as an excuse.  B had me half halt hard with the outside rein and keep my legs on, then soften with both reins.  We actually managed a full circle in a pretty quality canter, which was awesome.  So the next step here is going to be transitioning from this freight-train canter into a controlled canter more quickly.  This is the place where sometimes her former brood-mare-y-ness bugs me: I feel like MBM is bossing me around, like “I’m the mom, I tell you what to do.”  And I’m like “no, I’M THE MO– I mean, I’m the leader, I tell you what to do!”

Right canter was a similar struggled, but I was once again really happy to feel that MBM had taken some of our previous fights to heart and was getting off my inside leg much more promptly.  B cautioned me not to let her bait me into pulling the right rein.  She pops her head and neck to the left in a counter-flex, so in response I flex her back right.  But once we flex to the right, she falls in to the right, and does so hard (like, in a few of our previous rides I thought we were going to crash into a jump standard).  So I had to slow the tempo down, flex right, then keep her off my right leg, and weight my left stirrup a little so she didn’t feel quite so inclined to just motorcycle to the inside.

It was a great lesson to confirm my instincts and feel the progress we are making.  Along with MBM’s slimming down and muscling up, B said she can see her gaits improving and extending, and that the mare’s canter has gone from pace-y to more three-beat.  Which is fantastic!

After my lesson, I tried to hand walk Murray for an hour and gave up around 40 minutes. HAND WALKING IS SO BORING OMG.  But I’m trying to get him out a bit more to help push some of the interstitial fluid out from around the leg hole.  He’s becoming more and more of a pill about bandage changes, so my goal is to tire him out a bit with hand walking (which he finds both tiring and boring) before I change it today, and see if he can’t be more reasonable for it.  The hole is healing it’s just doing so at it’s own absurdly slow pace.

But my vet and all my vet and tech friends assure me that it will heal. As they always seem to do.  Even if it does take forever.

want to get back to this please