Murray has been on stall rest and in standing wraps for the last 10 days or so (per veterinarian request).  He doesn’t mind the stall rest so much, which is surprising.  Usually when he’s on stall rest he shits in his waterer or feed bucket in protest.  But he seems to have accepted his fate as a stall-only-pony for now, and his feeding stations remain un-defiled.

The standing wraps, however, have been a discussion.  Or… six.

Murray has never really loved standing wraps on his hind legs, and I get them on at shows by distracting him with a bucket and/or alfalfa.  I usually throw wraps on him as quickly as humanly possible when I’m wrapping to trailer, and then there’s the requisite “my legs are broken I can’t walk” period.  Every time.  One would think that with the frequency he gets stuff put on his hind feet, he’d remember that they exist all the time, not just when they are unencumbered by boots or polos.  But no.  (I think he has a proprioception problem. Honestly.)

When you discover you have to wrap your horse every day until the wound on his cannon is healed and proud-flesh free though?  Dissatisfaction will reign all around.

Start with denial.  You’ve been in this stage for six weeks already, wrapping the wound as little as possible in general, why change now?  Oh yeah, because your vet told you to.  This stage lasts 45 seconds to half an hour after the vet leaves and you decide to do what you’re told by medical professionals.  Put your wraps on slowly and methodically because it’s important to get them even and wrinkle-free.

Then get angry.  Because your horse won’t stand still for standing wraps, you’re going to wrap him as fast as humanly possible.  Who cares if the wraps look  bad or are a little uneven.  They aren’t pressure bandages, they’re just there to keep his muscles from swelling out from under his skin for no good reason you stupid fucking wound on the front of a cannon caused by some goddamn scabs fucking fuck.  Slowly, your anger-wrapping gets quicker and tidier.

Bargain with your horse a little to make the wrapping experience more pleasant.  Hide carrots in his hay so he can forage for them while you wrap his legs.  Get really good at holding the lead rope in one hand or over your shoulder but just within reach while quickly wrapping with the other two.

When it seems like you’ve been wrapping for an eternity (it’s been four days, btw) you’ll start to get depressed.  The rapid healing and flattening that the wound was showing when you first started putting steroids on it has slowed, and it looks like this thing will never heal. Seriously, will it ever heal?!  You’re getting really good at standing wraps, but who needs to know how to wrap legs when your horse’s legs are probably all going to fall off and you’ll never be able to ride him on his little stumps of hocks anyway. 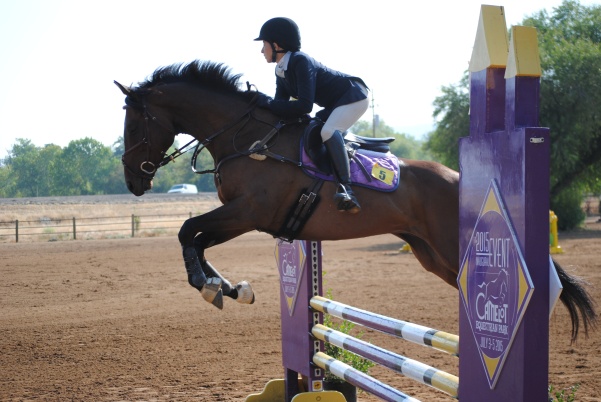 who needs hind canons anyway? not us!

Circle back to anger when Murray decides to run away from you mid-wrap one day.  Seriously, a third of the way into the wrap and he just runs away from you into his paddock.  He’s not panicked or afraid, or in any way concerned about the purple snake that’s trailing him from the stall.  He knows what he’s done, and he was willing to accept the consequences.  Tie him up and wrap him in the aisle from now on.

Victory comes when the Notorious OTTB stands tied in the aisle for you to do his standing wraps, both of them, without a walk break in the middle.  Ahhh victory, sweet victory.