When it left you last, Murray’s disgusto leg was your standard level of disgusting keratosis leg, but nowhere near cancer-leg.  Since then, it has become so much more disgusting before getting better.

First, the adhered scabby bits fell off with a little encouragement (I know, we’re not supposed to encourage that kind of thing, but it was seriously holding on by like 2 square mm and I couldn’t get the ointment underneath otherwise!) 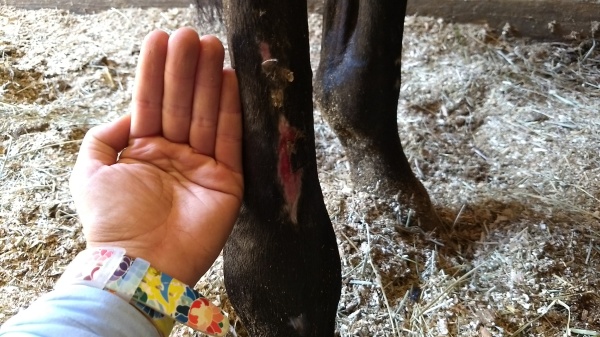 The last little bit revealed some pretty deep… wound or whatever it was underneath. But it got on with the business of healing over through secondary intention.  Ya know.  Standard healing mumbo jumbo. 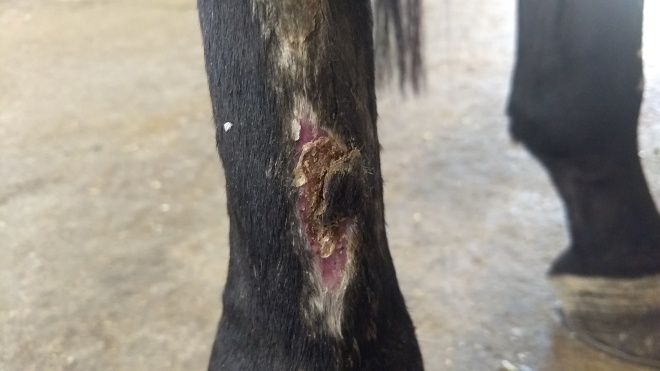 The above picture is from 8/8.  The next one is from 8/28.  During Camelot I wrapped the mostly-closed-and-dry wound with a little triple abx, telfa, and vetwrap before putting boots on.  It was a little yucky after because it, predictably, ripped off the scab, but after Camelot it seemed to dry up and close over nicely afterward.  I was like, this is totally healing and normal!  Look it’s all closed over! 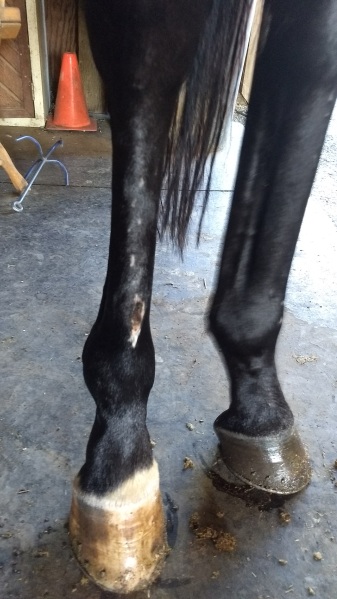 Except what’s what weird edema-lump?

I started to wrap again at this point, which I’d been neglecting for a few weeks because I’m part of the “let it dry out” school of wound healing.  I bought this pack of vetwrap knockoffs earlier in the ordeal and started working my way through the ugly colours (red and lime green, obviously leaving purple and teal and pink for a more glorious time).  Murray didn’t seem to care if we poked, prodded, pulled, or wrapped the lump, so we continued with vetwrap+telfa as before.

I finally got the vet out after the WSS show because the lump wasn’t going away. She poked and prodded it a fair bit and managed to pull off a deceiving scabby bit that was hiding some fairly angry skin underneath.  In her words, it wasn’t proud flesh yet, but it almost wanted to be.  Weirdly, Murray didn’t give a shit that the vet had poked and prodded his leg and pushed off the scab.  The middle of the wound, however, was kinda puffy and pink and angry.

Ugh. Gross. Proud flesh, which I had been trying to avoid the whole time.  The next pic is blurry and shitty, but you can see how angry the middle of the wound was — and this was after a day of topical steroids. 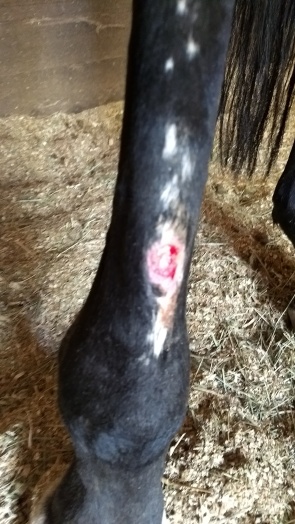 The vet prescribed a week of steroids, wrapping with vetwrap + standing wraps to avoid any weird swelling stuff, and no turnout for a little while.  Five days in, the steroids have done a magnificent job and I’m kinda wondering why I can’t put steroids on every little booboo? 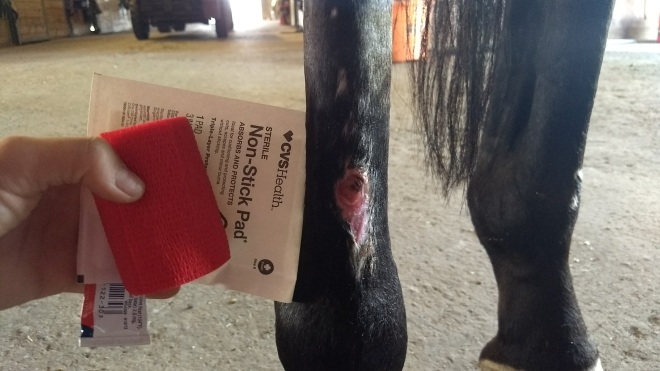 So that’s where we’re at with disgusto leg.  Still not lame, still not painful, just disgusto.

To add insult to injury, of course, almost all of the keratosis on the other legs has come back despite gentle and frequent currying.  So… it’s time to try some of those other ointments to break that shit down.  I cannot believe that last year, when I basically didn’t groom this horse for three months other than a brief brush over the saddle area, I got almost no keratosis build up, and this year it’s a legit problem.  Ugh. Why.