So. The experiment of last week.

When I took a lesson with Tina in May, I was starting to think about joint maintenance and preventative health.  Or maybe treatment.  Or …. whatever was appropriate.  I asked her thoughts, told her that I wasn’t looking for trouble/to spend money, but, you know, maybe the time had come to inject something?

Tina suggested, very practically (and, I should note, as a DVM), that I could try giving Murray what she calls a “B&B cocktail” for three days to see if it improved anything.  The B&B cocktail being 1g of bute and 250 mg of banamine twice a day.  If there was pain or inflammation somewhere in Murray’s body, the NSAIDs would mask them during that time.  If Murray was better on drugs, then we would know that he likely needs to be injected somewhere.  If he wasn’t… I’m not really sure what the logical conclusion to that would be.

So I put my horse on a pile of NSAIDs and a little bit of ulcer prevention on Tuesday of last week. And boy, did it ever tell us anything.

During last week’s lesson, Tina commented immediately that Murray looked great, that he was moving his hocks and his back really well.  This is a comment we don’t usually get until we’ve worked through all the residual stiffness, about halfway through a lesson.  Every exercise we did in the lesson was easier for Murray than it usually is — and it’s not like we’d been practicing a bunch either.  I jumped on him for the first time in a week for that lesson, and he was fantastic. Collecting the canter was so shockingly easy for him when I asked.  The difference was very, very clear.

My Friday  jump lesson was also “on drugs”, though we were coming down from them at the time.  Murray’s last dose of NSAIDs had been that morning right before the lesson, and he’d gone 24 hours between doses, so he probably wasn’t feeling as good as he had during the previous few days.  That, too, might have contributed to his nappiness. 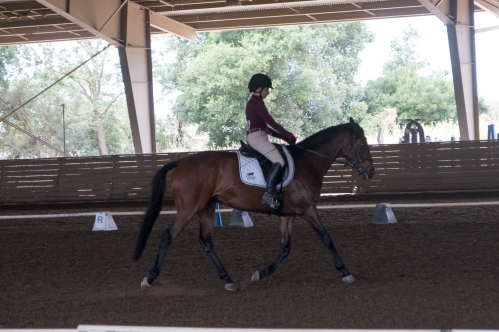 actually going for the extension here

I’ve actually already had the vet out to do Murray’s hocks (since this all took place last week) — I piggybacked on someone else’s PPE appointment.  It will be very interesting to see how it turns out, and whether this actually makes him more comfortable.

I’m more than happy to include hock injections as part of Murray’s routine maintenance.  He’s proven to me that he’s worth investing in (lol, only took four years), and obviously from a welfare and ethics standpoint I want him to be comfortable in the work we are doing.  I fully acknowledge that we ask horses to do some pretty unnatural things, though, and that some low level of discomfort is likely to be present in doing this. 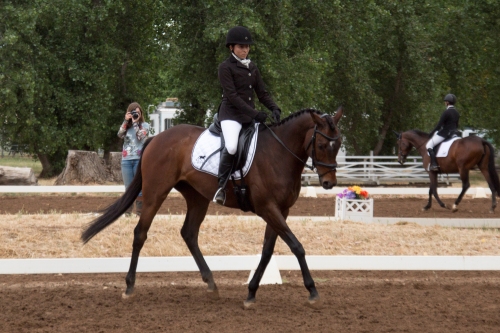 during the experiment, last week
not a totally fair comparison as it’s not quite the same moment of the stride, but you get the idea

But I also don’t have the funds to endlessly pursue what might make him feel better if the hock injections don’t help.  It seems like there are a lot of ways I can spend, validly or wastefully, money on this “problem” — and part of it depends on how big I decide the problem itself is.  There are plenty of horses who are comfortable competing at much higher levels than we with similar (or even more) maintenance needed.  Honestly, I’m hoping that this does the trick enough for me to be able to put thoughts of further evaluation and injection out of my mind.  At least until I develop that app and become a grillionaire.

during the experiment, july 2017

The key will be to keep evaluating Murray’s comfort and happiness in work.  Formerly, Murray’s objections to work always seemed to be to the concept of work in general, which I have always taken as a work ethic problem.  He’s always had a kinda shitty work ethic (but maybe he’s also always kinda needed some more joint support?).  So the next few months will be very telling for us.