I spent last week in San Diego for a wedding (+ friend & blogger adventures) this week, which is why the long, pensive silences and deep sighs.  But before I left, on Tuesday morning, I managed to squeeze in a quick XC school at WSS with trainer and my RBF (and others).

I wanted to get out and ride the Novice fences to build my confidence before Camelot, and also because the Novice course at WSS is cool.  RBF wanted to school her new, awesome mare.  One of our friends is working on getting to know her mare and settle her on XC, and the other was trying a mare she is interested in buying.   So it was a total girl power party — Murray didn’t feel out of place in the least, because as we know he is really a mare at heart. 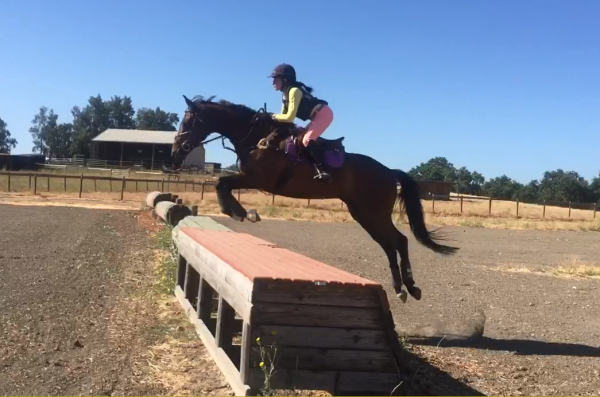 We had some minor struggles, which are interesting and gave me something to think about.  Part of it may have been due to Murray feeling sore or not quite himself — our Monday ride he was hollow through his lower back and I spent a long time just trying to encourage him to lift and become connected.  But it’s also a new height and new challenge for both of us, so likely that was contributing.  I started out the day with the goal of focusing on my position: I wanted to keep my lower leg underneath me a little better (instead of swinging it out ahead of me — went too far on that one), and follow the motion over the fences better.  I rode differently because of this, and maybe that added to Murray’s confusion.

Anyway.  We warmed up over a little log.  Murray wasn’t pulling me to fences the way he did at Camelot, but he was forward and happy.  Then we hit the log and cantered down to a log box.  Murray turned on the gallop in between the two fences, I fell into the trap of assuming speed is bravery, and he stopped.  It was fine, we looked at it, turned around, and went right over.  I know that’s a problem we have, and should have actually put in the effort to get Murray looking to the next fence before we were on top of it. 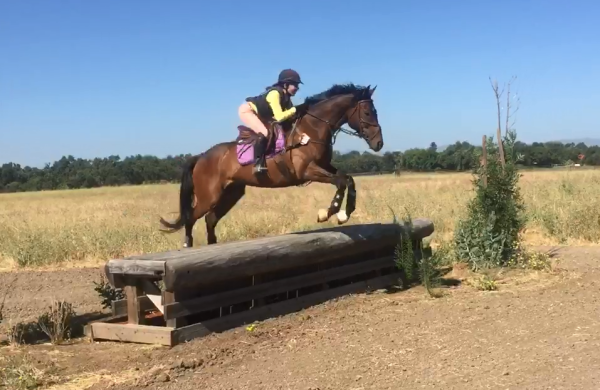 We jumped the next few fences (a coop and another log) successfully, then came up to the big red table.  This is a max size novice fence and it looks and feels BIG — part of that is that the ground around it has sunk and been worn away, so it has gained an inch or so since it was first put in.  (I’m guessing we will need to dig it down or replace it for the September events.)  Galloping up to this fence Murray had a great, forward step, and I tried to keep my leg on with gentle pressure to remind him to keep moving forward.  But, as you saw earlier this week, it did not go as planned.  Murray slammed on the brakes pretty far out — we had huge skid marks leading up to the fence as we stopped.  (Riding the stop I had felt like perhaps I should have kicked him over the fence anyway, but after watching the video I’m SUPER glad I didn’t, as we had no power after skidding so far.)

I turned to my trainer and said “I have no idea what’s going on with us right now. I don’t know if it’s him or if it’s me.”  She told me to try again, let him shrink his stride and get deep if we wanted, and she’d watch us.  We jumped it, but we got really close and I felt like Murray had to put in a LOT of effort to get over it.  I wanted to jump the fence from a more open, galloping stride and better spot, so we tried again. We had a good pace, the step was a little short but not too bad, and yet we stopped again. 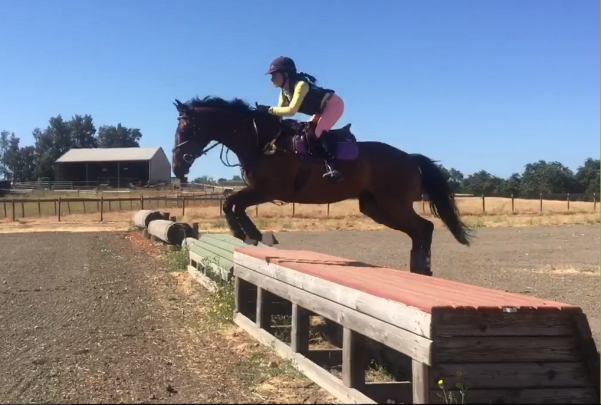 I chose to back down to a simpler question.  We both needed to be confident that we could tackle this stupid table.  We jumped the green coop (you can see it in the background above), and Murray was fine.  B suggested I turn around and take it immediately the other direction to give Murray something “different” to object to.  It worked — Murray stiffened his front legs on approach, and I smacked him behind my leg where I wanted him to take off to let him know that we really were going.  We went.

So we tackled the red table one more time.  I kept my leg on, but didn’t chase Murray with my leg or seat.  I insisted he keep an open step, and didn’t pull him back at the last minute.  I didn’t look down, I didn’t stare at the fence, I stayed calm.  I say I did all these things, but really what I probably did was ride slightly less like a drunken monkey.  And we did it, and it was awesome!! (Pic evidence at the top of the post.)

The rest of our adventure was really smooth sailing.  Murray and I really enjoy the technical elements presented at Novice — they are close together enough to be fun, but really welcoming easy to navigate.

We killed it at the half coffin, and the up bank combinations. Murray was slightly less forward than I wanted, but after the success at the red table I wasn’t going to be too pushy.  I know that neither of us handles a lot of change at once well, so I tried to keep it simple-ish: forward step, no more stops.  It worked — Murray was super for everything else on course.  I’m super proud of the pony.  Sure, we had hiccups, but he did the things!  And it has me feeling pretty confident for Camelot, since I’ve seen all their Novice fences and ours are bigger (lollll). (Please don’t change your course suddenly, Camelot!) 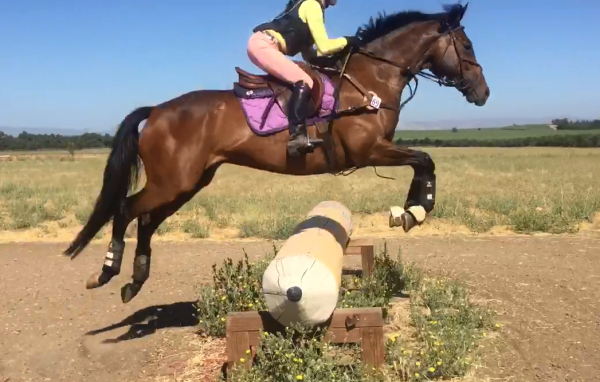 novice pencil, four strides to a quarter round (but we made it five, natch)

There’s a lot I’d like to change about my jumping position after watching the media of this school — and that was WITH me trying to change some of those things on the day of!  I’ve always ridden defensively and “unfolded the landing gear” faster than I should.  I also tend to be behind the motion of the fences a little.  Murray is pretty trustworthy now, so it would probably be a good call to make his life a little easier by jumping with him a bit more.  I see grids and no stirrups work in our future!  And if you have books or videos or other resources for me to practice on the ground with jumping positional stuff, I will gladly take them!