The last time I ran rated cross country at Camelot did not end well.  I had better luck last year with an unrated course, but that course was a bit on the soft side and not terribly long.  This year, I was excited to see many of the old fences on the BN course, lots of nice long gallop tracks, and noticed that I felt like everything looked tiny!  It was awesome.

Legitimately did not remember this part of my course walk until I found this photo because @ceaustin and @suzannebrynn and I had totally famous margaritas.

I didn’t ride until noon on Saturday, so I had plenty of time to jump judge for prelim and training.  The divisions went pretty smoothly, minus a rider fall at the coffin in training that created a little hold on course.  The EMTs were not totally sure how to get out to her, and once they were there how to get back, which was both hilarious and exasperating.  But the EMTs were very kind, and the rider was fine, so all was well.  Unfortunately, there was another hold on course due to a rider fall in warm up that did not end so well — the rider was rushed off with sirens and needed surgery.  Sobering.

Despite knowing about both of these holds, I somehow tacked up way, way, way too early.  Like a full hour before I needed to be trotting around in the warm up too early.  The upside of this is that Murray was extremely well behaved to tack up.  I did it loose in his stall, and he just stood quietly and nibbled on hay while I slowly put on my vest, sipped on some water, and made sure that my pinny was on nice and tight.  Eventually I could stand it no longer, and headed over to the warm up ten minutes before I would have been in there for my original ride time.

Murray and I stood in the shade grazing for a while, and after I couldn’t stand it any longer I climbed aboard.  Murray was not really impressed with this idea, and wanted to run (forward or backward, either would be fine) home to stabling.  I walked him in small circles and figure eights until his back relaxed, and finally, finally, we headed in to warm up.  This did not help the feeling of nervousness, of course, but c’est la vie.  The one thing I wish the show venue/warm up steward had done was announced an approximate delay time for the division so that we could have avoided constantly checking in.  But c’est la vie — I get that they wanted to try to hurry things along as much as they could.

Murray warmed up perfectly, moving up toward the fences without hesitation.  Camelot has a fabulous, huge cross country warm up, and there were lots of fences for us to jump.  I did everything once, repeated my approach to a table so I could have Murray jump it a bit more out of stride, and then headed out on course.  I got to watch my teammate Suzanne ride the first few fences with her 5 year old (or maybe only 4?).  Then it was our turn out of the start box!

I didn’t feel any hesitation from Murray at all as we came up to the first fence, he was all go, go, go!  Between fences 1 and 2 we got up a pretty good canter, and Murray only went off the track for a little while as he gave the prelim/training start box a wide berth.  Fence two was a bright blue bicycle rack off of a tight turn that I rode firmly too, since we’d had a stop there last year.  Fence three was Excalibur, and Murray had some second thoughts about the line of fences and jump judges to the left of the sword.  He ran pretty far to the right, but I pointed him back at the fence, trotted him to it, and over we went. 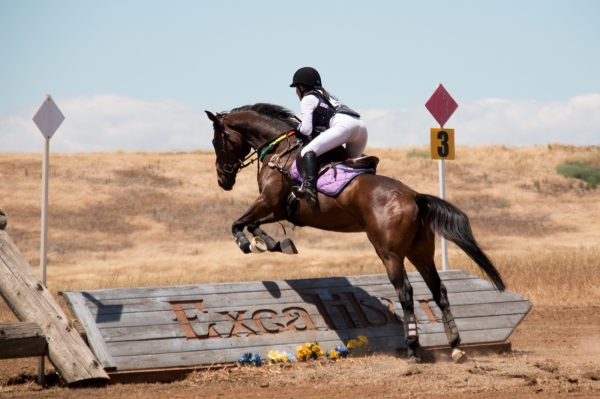 Fence three to four was where Murray really started to gallop, and since fence four was a little table I let him at it.  There was a huge stretch between four and five as well, and Murray really got moving there.  We were going pretty fast — around 500 mpm — and as we came up the small rise to fence 5 I over-checked Murray a little.  He didn’t care, leaped over the post and rail fence, and continued on to six.  Six A-B were close to five, and my main spot of worry for the course: they were on a downhill, not quite a straight approach from 5, and had a bending line between the two fences.  But I pointed Murray at them and he just went!  It was the exact same thing with fence 7 — he was galloping over to it so fast, I remember thinking that the wind was really, really loud in my ears — and about six strides out I asked him to come back to me a bit and look at the fence.  He looked at it, decided it wasn’t a problem despite being pretty slanted and bright pink, and galloped on.

Fence eight was where I got us in trouble.  We were barreling down to the trakhener, and I knew we were going to have trouble with it at that speed.  Murray wasn’t listening to the brakes though, so I tried to keep my leg on while I aggressively half halted.  This got his attention back, but it was too much hand a little too late, and he came to a jerky stop about a stride from the fence.  I had heard the TD describe earlier that she did not want any horses jumping fences from a stand still, so I knew I wasn’t going to squeak by without the stop anyway, so I walked Murray up to the fence, circled at the canter, and he leaped over no problem.

I should have known this could be a problem spot for us, but I guess I was too worried about the 6AB combo to think about the downhill approach to the trak.  I also didn’t think we’d be going 450+ mpm, I thought we’d be cruising along at a much more rateable 350 mpm.  Had I thought about it in advance, I would have asked my trainer (duh), or thought to circle well back from the fence to get Murray’s attention back on me.  Alas, I didn’t think about it, and I certainly wasn’t able to think about it out on course.  But at least it was a new mistake, and not one that I will make again! 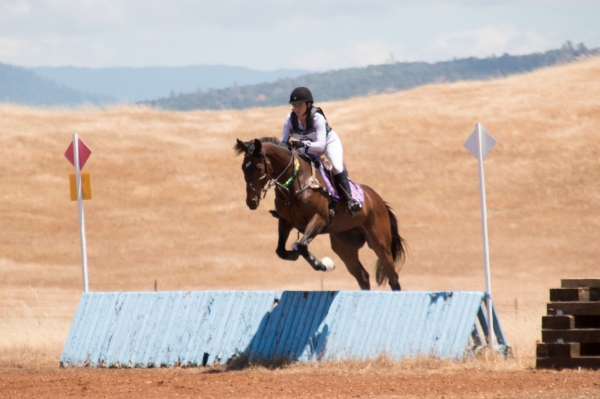 camelot is quite pretty!

I briefly pondered how I should handle the rest of the course now that I had a stop.  Should I slow down?  Should I school the water?  I decided to push on — we’d had such a good run so far, there was no reason to slow Murray down and disrupt the flow of the course.  There was also not very much course left — we were 3/4 of the way home anyway.

Despite the  many training and prelim fences surrounding our water entrance, Murray cantered in no problem.  Our second to last two fences were a half coffin, and I slowed Murray up a fair bit so he would see the ditch and not step in it.  I needn’t have worried, since he went right over it, and happily redirected over the sharkstooth second element.

jumping ahead was quite prevalent on course – ah well

I’m so, so happy with how cross country turned out.  I had wanted to run clear and within the time, but I’m okay that it didn’t happen.  The mistake was mine, not Murray’s, and it was an honest one.  Everything about the course minus that one moment felt fantastic — we were going fast, but were totally in control (well, we had steering, if bad brakes), and the speed wasn’t an evasion.  Instead of using speed to mask his insecurities, Murray was excited to be out there, and whatever I pointed him at he was game to jump.  THAT is a huge accomplishment.  Even if it’s not all that different from Twin, this time I was right there with him, instead of holding on for dear life!

everybody's working for the weekend
Twenty Four Hours on the Farm, a vignette
over and over
It does not suck here. 10/10 will stay.