Our dressage trainer/chiro/all around miracle worker Tina came to the barn last week, which was perfect timing for us.  Coming out of Twin I knew I wanted her insight to improve our relaxation and steadiness, but I also wanted to pick her DVM brain about Murray’s physical health and what I might want to focus on to keep him physically healthy too.  I’m not trying to look for trouble, but if there are medical interventions that will keep the horse happy and healthy and extend his competitive life (and thereby his ability to cart me around XC while I’m still in panic mode), I can probably stand to shell out for it.

We started with a quick body check — nothing stood out to Tina as needing adjustment, so away we went for our lesson.  Tina and I briefly discussed Twin and the hangups we had in dressage there — building tension to canter transitions, lack of steadiness and relaxation in general, very stiff behind — and we got to work.  Murray has been way better in our walk work lately, but we walked for just a touch too long before picking up a trot and he started to get slower and stickier and slower and stickier.  Tina immediately caught me nagging with my seat (again. she catches me EVERY LESSON even though I swear I practice not nagging between our lessons), and when Murray offered up fussiness in the bridle instead of a steady connection she had me put him into a shoulder-in right away. 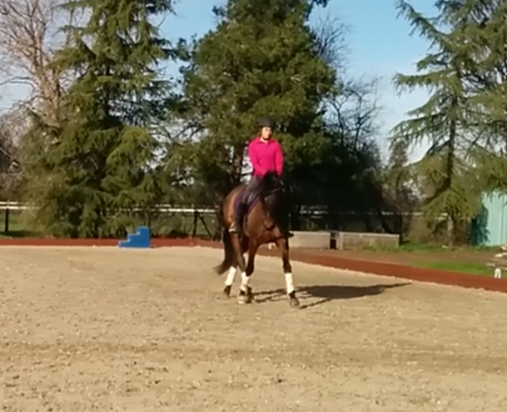 Murray has always been happy to escape from work laterally, mostly by swinging his haunches away from whatever ails him.  So I have been trying to ride him really straight, so that escaping sideways is less of an option, and energy transfer from his hind end becomes a thing.  And it’s definitely been working, but there are times when it doesn’t work, and I’m not quick enough to catch Murray out before he can pull the reins out of my hands and pop up through his neck.  It’s been a while since I asked Murray for a shoulder in on purpose, and he was definitely a bit reluctant to bend and step under his own body, but it did get him to stop fussing and get to work.

It was a similar story in the trot.  We were steadier, for sure, but we didn’t have a great connection and Murray was avoiding the contact by setting his neck in one position.  Tina had us slide into a shoulder in down the long side as we came around the circle, and then straighten out along the next long side.  The long sides definitely got Murray movin forward with more energy, but he was also fairly downhill, so the key here was to slow down the tempo (but try to keep some of the ground cover) to increase the activity behind.  Which, it turns out, is really, really hard for us on a straight line.  Too easy to just plow downhill and into the ground.

When Murray tried to use our renewed lateral work against me by sliding laterally around the circle instead of bending and tracking forward, Tina had me catch him with the outside rein.  If a little more connection to that outside rein didn’t work, I was to counter bend him until he couldn’t spin his haunches out from my inside leg, and then resume the inside bend when we were straight again.  I really only needed this move in its entirety twice (but then again, we did move on to other activities fairly quickly). 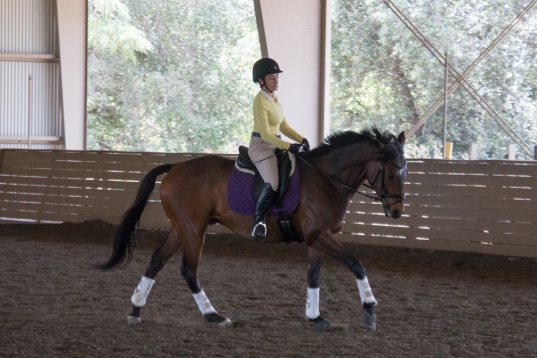 Our canter transitions were a little inverted, though fairly reasonable.  Tina noted that Murray was using his neck to get himself through the transition, which he doesn’t really do on the lunge line in side reins, so had me plant my inside fist on the saddle so that Murray couldn’t pop his neck up to use it through the transition.  It’s an old move of ours, but I’d mostly phased it out in an attempt to avoid being so reliant on the inside rein and increase Murray’s evenness through both reins.  Fortunately, I only needed it for a moment through the transition, and then could get Murray back fairly evenly between both reins.  All of the canter transitions were pretty good, Tina was like “I don’t see what the problem is!” and really, neither did I.

But honestly, I can’t blame Murray for being tense at Twin.  The warmup was a madhouse, I didn’t get to our full pre-flight routine (tack up, ground work, lunge in side reins, get on and ride) because of time.  Tina agreed that with exposure and increased relaxation at home, one would expect that to go away.

The next step in the canter was to get Murray to take some bigger steps and use his body some more, so back came the shallow counter-canter loops and shoulder-in at the canter.  Murray really surprised me here: as soon as I asked for a little bend down the long side in the canter, all this energy came out of nowhere and his canter got huge and marginally uncontrollable.  Suddenly he was right there in my hands and really listening to what I had to ask him. His back was somewhat tense, but he wasn’t disobedient and the quality of his canter got better as we went.  The key was to really slow him down through the short sides, then keep half halting and asking for a slower step through the shoulder in and counter canter.  And even though we haven’t done it in ages, he didn’t try breaking once in the right counter canter. 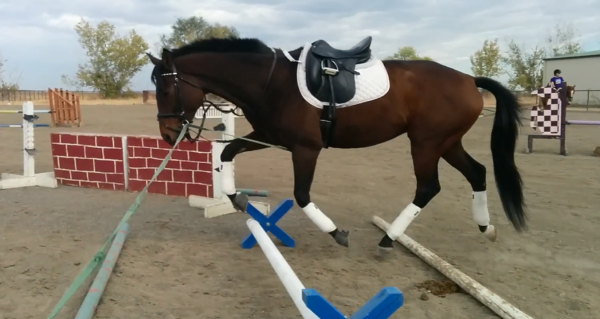 yes we are sooooooooo good at trot poles

The best work, though, came after our next walk break.  We talked more about the best way to tackle Murray’s stiffness behind, and some ideas of what to do next (more on that later).  Tina said she wanted to see how he did over poles, so she set up five poles at about 4′ apart.  Murray and I do trot poles all the time, so we trotted in and he bumbled his way through them without much help from me — as we often do the first time.  So Tina brought the poles in a little more, to about 3’3″, and had us slow down to tackle them.  The next go through was still a bit messy, but the spacing was right and Murray didn’t hit any or scare himself.  She had us go even slower, and Murray really picked his feet up and even pushed a little from behind.  She pushed for an even slower tempo, and after several more repetitions Murray came around the corner quite slowly and as soon as he saw the poles started picking up his feet, bending his hocks, and pushing more from behind.

It was a lot to think about, and a great lesson in that it addressed a lot of questions and issues without overloading us.  Even though I have been given homework of things I already “know” how to do, the application of them is getting different results — and one would hope I can apply the techniques with a little more subtlety now.