Murray and I have had two really lovely rides after the bullshittery of last week.  Because I was foiled by the wind repeatedly on Thursday and Friday and then spent the weekend out of town, I asked our barn manager’s kid to put in a ride on Murray for me just to get him out and exercising.  She’s ridden him a few times recently, and he’s been fairly reasonable as long as she doesn’t ask for anything too challenging or exciting.  So of course I was rewarded with video of Murray cantering sideways (like a hideous half pass with no bend) and literally crashing into a horse standing at the mounting block.

For a moment I regretted ever asking for help.  I thought I’d made a huge mistake.  And then I was like “you know what, homeboy has got to be able to w/t/c with a stranger on him — especially when they are asking him to do nothing more complicated than go along the rail and turn  before the end of the damn arena.”  I resolved to have a take-no-shit approach on Tuesday, fully expecting some truly atrocious behavior. 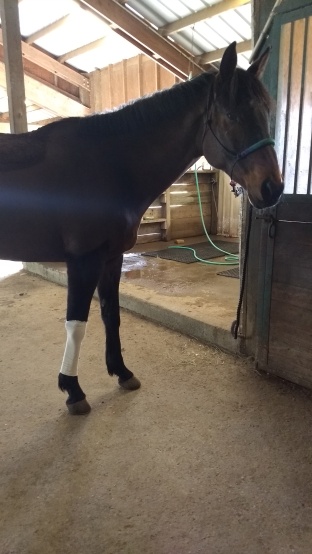 I made Murray try on some tubigrip as a strategy for
compression/ice. He tolerated it really well, actually!

Instead, Murray was well behaved on the lunge line, pretty responsive, and absolutely perfect under saddle.  I kept with the recent theme (don’t override with my seat/crotch/ass, don’t nag, just try to be really correct and have Murray meet me there) and Murray rose to the challenge.  We had a couple of sticky w/t transitions but nothing awful.  His canter was a tad less forward than I want, but very round and adjustable.

Having a saddle that fits is absolutely magical. It is SOOO much easier to feel and fix when I am starting to tip forward or perch, and any time I start to anticipate or get too noisy with my seat I can feel it.  I ignored the idea of getting my saddle fit for a long time, but if a well-fitting jump saddle does for us what this dressage saddle has, I will be running 4* in no fucking time flat.  So yeah, it turns out that Robyn did fix all my problems, hooray!

Murray was equally fantastic on Wednesday, and I worked through some of our test movements to get ready for them.  Our biggest challenge is transitions.  Murray does best with them when he knows they are coming — especially when they are part of a pattern.  Conversely, he does poorly with them when he doesn’t know they are coming.  It’s a complaint I’ve had about him a lot, that it’s almost like he’s not “listening” to me when I ask for things, he’s busy doing his own thing (whatever that thing is).  So I’m trying to figure out the balance between doing too much with my body and giving him adequate half halts/notice that we are approaching a transition.

I also specifically practiced letting him walk around on a loose rein and then picking him back up to do some work, which has often been a source of angst for us.  He did much better than on Tuesday or in the past in general, so that was good news.  If only this Dressage Murray can show up to Twin, we will be in good shape!

Apparently Murray just needs another rider to reality check him every once in a while and remind him how good he has it with his well-trained human.  (If this is a legitimate training strategy I am 100% going to continue to employ it in the future.)