Skip to content
Home, and enjoying this weather as any good Prussian should (even though he's actually Polish).
just farm things vol. 2
it is time
Justin Beaver on his daily commute.

We left to school Twin Rivers on Friday at noon, though not without significant disorganization on my part. I packed everything that seemed to be absolutely essential — the horse, a saddle, girth, bridle, tall boots, and helmet — and then kinda threw anything that seemed like I might need it in my car and stopped at Target on the way.  It worked (ish): I ended up with three hind boots and only one front boot, and only three standing wraps, but me, my horse, and all of the other essentials got there just fine! 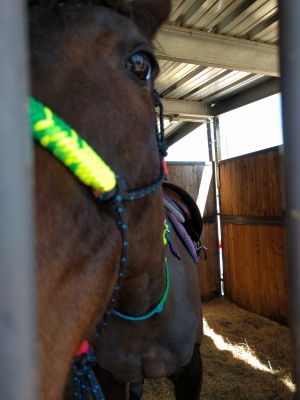 The ponies had about ten minutes to settle in after we arrived before we got on for a dusk hack.  My goal for the weekend was to see how feasible it would be for Murray and I to show at Twin in April (a mere four weeks away!!!), i.e. show him the fences, see if he remembers anything about cross country, etc.  But I also wanted to use my newfound skills of expecting professionalism and telling him firmly exactly what I expected of him (with frequent rewards).  (Murray is also modeling his fabulous new rainbow rope halter from Sundance halters, which I am IN LOVE WITH, and I love my rainbow neck strap EVEN MORE.)

At a new venue Murray is often, predictably, looky, spooky, and bucky under saddle.  He was all three of these things during our ride, but the amount of looking, spooking, and general silliness I got was SO much less than I have experienced in the past.  He was awful to tack up because I was in a rush, but once I got on I just asked him to keep walking forward.  In the schooling arena I brought him back to a walk from a jig, or a trot, and when we did pick up the trot I immediately asked him to pick up some semblance of contact as well.  And what do you know – it worked.  He stopped looking for things to look at, and got down to business.  There was a little bit of bucking and swapping in the canter, but I got up off his back and let him have a little canter around, and then asked him to get back to business, and there he was again – right there with me. 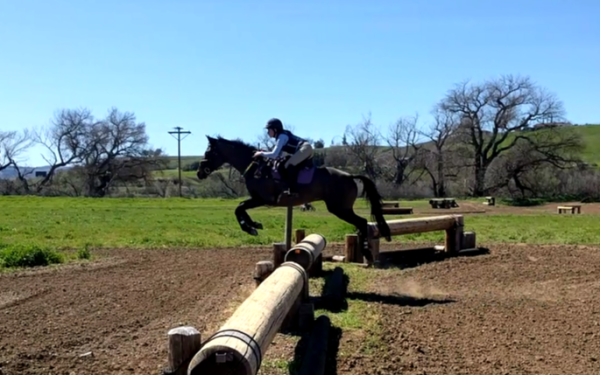 On Saturday morning I watched the kids at a couple of their young rider lessons, then got tacked up for my cross country schooling with B.  We decided that we would try for a longer, more educational school on Saturday with a short, review + XC-run-simulation on Sunday, provided that Murray’s brain could handle it.  Murray came out ready to JUMP.  It was like we haven’t taken a year off from XC and competition, and he was attacking the warm up fences.  The course is in the middle of some fairly big changes right now, so I jumped a few sizes of each element. I wanted to school mostly beginner novice fences, with an eye to a possible move up in the Fall.  But we will be showing BN until I can get my show nerves under control and give Murray the supportive ride that he needs to be successful.  Schooling bigger definitely helps me feel more confident, but I wanted to make sure that I gave Murray (and myself) the chance to look at everything we might see on a course.

Murray was SUPER forward to the fences, literally pulling me to most of them.  All I had to do was keep my leg on and get out of his way.  Of course, that meant I kept getting left behind because I’ve been riding somewhat defensively for the last year, and I’m pretty weak and rusty.  I’m not used to riding this forward jumping horse, and I also didn’t want to let myself get sucked back into the old mistake of assuming fast = confident.  I checked Murray a little too much to a fair number of fences, but he persisted despite my bumbling in those cases, and every re-approach got better!

We did have a handful of stops at technical questions that we haven’t seen since our last XC outing.  The ditches and down banks all posed a big problem for us at first, and I had to walk Murray up to them and back and forth in front of them before he was willing to go.  Once he remembered what ditches and down banks were, he was fine, but it took a few tries.  At a second set of ditches on course he slowed and I let him come down to a halt, but after a second of looking he pulled us right over them!

We schooled a brush roll thing that I thought was Novice, and Murray stopped at it when we came up to it the first time.  I think we both realized that it wasn’t a Novice fence at that point, but it wasn’t terribly oversized.  The thing that had me worried was the terrain — immediately after the landing to the fence was a steep but short downhill, and jumping into a downhill landing is something that we can always do to practice more.  I think Murray wasn’t sure of the fence itself — he’s never seen a brush roll before.  We came back to it with a little more determination and he cleared it easily, landing off the edge of the landing pad and partway down the hill with no problem.

I’m not going to pretend I wasn’t super pleased we so easily schooled a Training level fence.  Even though it wasn’t our goal when we came out, it’s a nice little feather in our cap to know we can do it.

Of course, there is a whole list of new mistakes I’m making that I need to work on now!  The classic problem is strength and my position — I still need to sit up a little straighter and get used to these long, two-point canters.  I will need to study a little more video of riders with a similar body shape to mine to see how they hold their bodies on cross country.  I also need to practice following and staying with Murray more over fences.  The defensive position works for us in stadium because he so often gets behind my leg and super deep to the jumps.  But out on XC he was leaving strides out (read: using an appropriate take off point for any other horse), and jumping me right out of the tack.  And for the first time ever, I kept pulling my reins too short, and noticed that my elbows were locking.  So I will have to get a new set of reins (mine have an inconvenient tear in the rubber grip), and work on those elastic elbows.

We schooled Sunday too and he was just as faboo!