Last Friday I had Robyn Dorius, certified saddle fitter at Advanced Equine Saddle Fit, out to check on Murray (along with a few of the other horses at the barn).  I was running late all day so showed up late for my appointment — just what I wanted, to be late and underprepared for an appointment where a stranger would be slapping saddles on Murray’s back.

Fortunately, besties to the rescue and one of my friends had Murray bridled and was lunging him a bit for me.  He was unappreciative and recalcitrant because… Murray.  Robyn started out by examining Murray while he was naked, and palpated both sides of his back and along his topline.  I prepped her by apologizing profusely for his potentially bad behavior and told her to let me know at any time if I needed to just kick his butt a little.  She collected a little information on me — what disciplines I ride in, what level, and whether or not I compete. 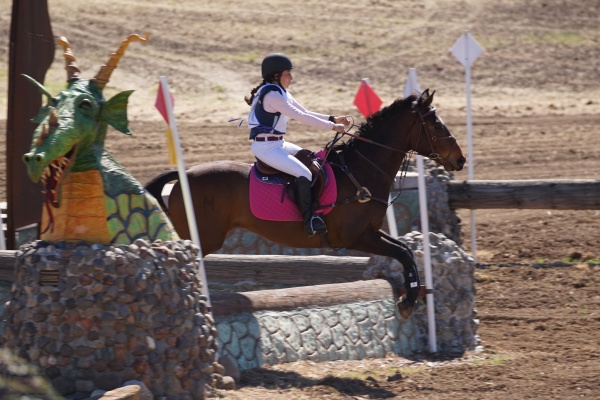 sometimes, and with varied success

Robyn started me in the dressage saddle and comforted me when Murray made his most ridiculous girthy pony moves.  Interestingly, she commented that she knows a few horses that go “girth lame” during tacking up — Robyn attributed it to the horses getting so tight in their pecs that they can’t walk properly.  She felt underneath the saddle on both sides before I got on then had me walk and trot both directions.  It didn’t take long before she called me in to the center to give me the bad, but not unexpected, news: my dressage saddle doesn’t fit.

Robyn was forthright and blunt without being unkind.  “For what you want to do, if you want his topline muscles to develop properly, you cannot keep riding in these saddles.”  She also took the time to explain to me exactly what was wrong with the saddle.  To start with, the tree was too narrow.  Exacerbating the problem was that the tree is the wrong shape.  And adding insult to injury is the fact that it was really, weirdly tight in the gullet around Murray’s withers.  Robyn showed me where she should be able to slide her hand in under my saddle but couldn’t (at the wither behind the shoulders), and where she shouldn’t be able to slide her hand under the saddle but could (under my seat).

We switched to my jump saddle.  Murray was being as bad as he ever is about warming up (I’ve been lunging him to warm up lately and that helps a lot), but Robyn insisted that seeing him on a bad day was actually a good thing.  After a couple of circles in each direction Robyn showed me again the problems with the saddle: this time it wasn’t too narrow, but the tree was still the wrong shape.  The bridging problem was exacerbated even more in my jump saddle and Robyn managed to get essentially her whole arm under my butt while I was on Murray’s back.

Murray did not really appreciate, but behaved.

So with that in mind, Robyn suggested that we put a saddle with a more appropriate tree shape on Murray to see if it could change his movement at all.  She started with a dressage saddle that she had taken out for one of the other girls.  I felt underneath the front panels and up in the back and wasn’t really sure what to look for, so Robyn guided me in what she was looking for in the saddle.  Ultimately she decided to go and get a different saddle from her truck to try on Murray.  This second saddle, a Custom, fit him much better than any of the others we had tried on so far, though Robyn said that if it were his saddle she would have changed the flocking a bit over the withers.  (During this portion of the appointment Murray was biting the air above my jacket sleeve and giving Robyn and me the side eye.  It was like he knew he wasn’t allowed to bite me — he’s not — but had to get his dissatisfaction out in some way so the air was what had to suffer. I was amused.)  We tacked up a third time and I got on. 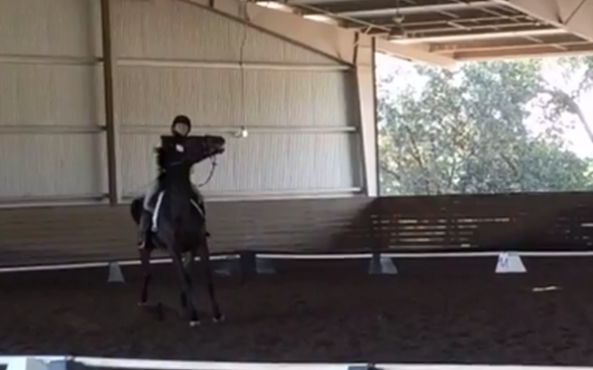 murray: is this REAL LIFE?! is this FOREVER?!

Immediately Murray’s walk felt bigger. I complain about his walk a lot.  This was not his walk.  We walked and trotted and at this point Murray was well and truly sick of my shit and threw in some haunches swinging and sass of his own.  Getting tacked up and half ridden at the walk and trot only three times in an hour is not on his list of favourite things to do.  This was no magic bullet, and I didn’t expect it to be, but I did enjoy sitting in the Custom.  Robyn had me feel under this saddle again too, and pointed out where it was a little tight against his withers – she said she would change the flocking there (if it were my saddle, that is).

In the end, Robyn suggested several saddle brand trees that might work for us (Custom – but I don’t like big blocks so it’s probably moo), older Schleese’s, and… some other trees.  I don’t remember.  But she said that if I got a saddle/saddles out on trial she would happily evaluate them for me and could bring along a few of the consignment saddles she has at home to do a full on comparison.  (I always keep an eye on The Horse Of Course consignment saddles, because I lust after a Sommer, and Robyn said she’d happily evaluate those for me too.) 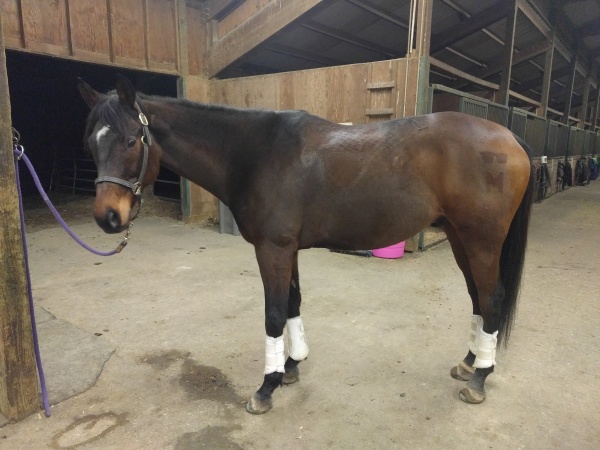 can you believe how good I’ve been, putting up with your
saddle-fit garbage, Nicole?!

So there it is. I need two new saddles.  But honestly, I’m not even upset about it.  Robyn took the time to teach me her saddle fitting philosophy and how to look for signs of good and bad saddle fit on my precious pony.  I’ve played around with a few saddles since then and can see which ones totally suck (like my dressage saddle) and which ones seem to suck less.  This is a major improvement over my previous level of saddle fitting knowledge.

And look at the even brighter side: it turns out that my SUPER sensitive pony has been toughing it out and showing up through a couple of pretty poorly fitting saddles.  Very, very proud of him for that.

Cherry on top: knocked one off the 2017 goal list already!