After Murray’s Monday morning melting moment (gosh there are just so many fun alliterations I can make with this!), I knew that Tuesday would take a little more care and tact.  I got out to the barn in the evening, when the arena was already busy.  I tied Murray up in the same place as on Monday, and took it really, really easy with him while I was grooming and as I started tacking up.  I unhooked him when we got to the girth, gave him plenty of carrots, and walked him around the barn twice to both settle him and enforce manners (walk, stop, stand, good boy, walk more, etc.).  Murray walked around a bit more than usual, but didn’t seem like he was particularly scarred by Monday’s misadventure.

I started with lunging, as I almost always do for dressage lessons these days, and Murray wiggled and spooked around a few times.  He was a little short behind but he always has to work into a proper trot.  And then he was dramatically, absurdly, cartoonishly lame for five steps.  Like he had three normal legs and his left hind was wearing a rollerskate.  I stopped, checked his feet, walked him for a minute, and trotted him out again.  Back to normal Murray short-steppin’.  I called it a night to be on the safe side and gave Murray a big scoop of bute with a nice warm mash.

I wasn’t terribly surprised he was a little lame.  It could have been a rock/abscess/twisted ankle easily, since it came on very suddenly after passing through a deep-ish spot and disappeared just as quickly.  But Murray had also spent five minutes freaking THE FUCK OUT the day before, then a grand total of ten minutes on the lunge, and promptly stood in his stall for more than 24 hours while it plummeted from 50 degrees to 35 degrees.  I wiped his feet down when we got back to the barn to check more carefully for potential abscesses (nothing).  But when I put my hand on his glutes he tensed his quads and lower back so tight that the muscles were bulging like crazy.

So no riding on Tuesday.

Wednesday was just as cold and horrible, and it was pouring to boot.  Luckily when I got to the barn there was only one other person there, and she had just gotten done riding, so I quickly walked Murray out to the arena to check how sound he was.  I left his blanket on thinking that I could take it off if I needed to for further diagnostics.  When we got to the arena Murray was so excited for turnout, just so so so excited, and he kept letting me walk a few feet out in front of him and then leaping and flailing and high fiving the air with joy.  But manners, we must remember them.  So I insisted on a little sobriety for a moment, lunged, identified very quickly that Murray was not lame, and turned him out, to his great joy.  Then I brought in Murray’s best friend, confidante, and emotional support animal, Logan, and the two of them had a fantastic time.  Logan started out with a little scared side-eye, but once the two of them had run the wiggles out he was much happier and softer. 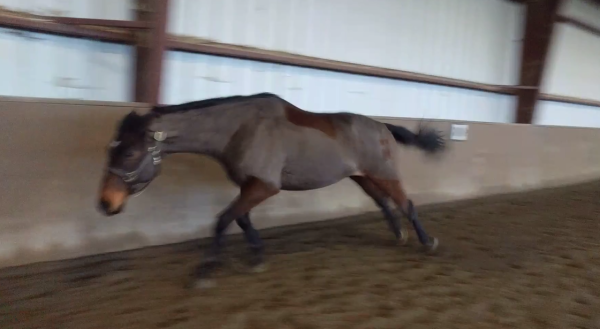 his happiness was a golden poem

Tacking up was much better.  I tried tying to a different spot and gave Murray lots of reinforcement for standing and being polite (which he is starting to get, as he will sometimes pointedly look away from me when I’m working with him).  We walked up and down inside the barn since it was pouring outside, and Murray was very reasonable.  Very reasonable.

I lunged quickly both ways and got on.  Murray was pretty forward but I could see that his back remained tense and wasn’t really working.  The wind picked up, and the lights in the arena danced the wild dance of poorly secured lights.  I forgot my tall boots, so had to ride in my Dublins, which was not my first choice.  But I was actually able to ride, so I took it.  This did not help, of course, with feeling secure and comfortable in the saddle with crazy winds + potentially crazy pony. 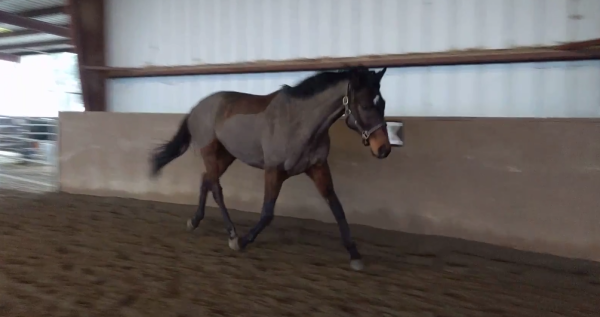 Murray was wiggly, tense, and very forward, so I rode a bit front to back.  But I did not feel secure enough in the tack to really push him forward into my hands properly.  My whole goal was just to get him working and listening, instead of looking around the arena for things to spook at.  I started to feel more comfortable in the Dublins after we cantered, and Murray actually managed to put his head down and get some work done.  Every time the lights shook over us or the arena creaked and groaned he wanted to run in the opposite direction, of course, but he settled pretty well afterward and would get back to work after just a short spook.  Right up until a huge gust of wind shook the arena right on top of us, and Murray scooted off in the canter, and then right as I got him settled again a huge gust of wind made the whole arena shake, groan, and rattle above us and blew open the enormous double doors at the end.  I called it then and there and walked Murray back to the barn, where it sounded like we were inside a hurricane and the other girls in the arena joined me a few minutes later.

I checked the weather station on campus and the wind averaged 37 mph with gusts up to 47 mph at 10 meters height – i.e. arena roof height.  Definitely more than the 15 mph predicted by the weather app.  And there’s more of this to come!  HOORAY!