Do all the things collided head-first with disease caught from babies this week and so all my well-laid plans have been put to the wayside as I lay in bed watching Crazy Ex-Girlfriend (you should watch, no really, it’s GREAT) and The Crown.

It’s okay. I still got a few things done.

I clipped Murray again. It went… poorly to start with, but got better.  It turns out that he has crazy super thick winter hair and if I choose to clip this late in the season again I will straight up need a pair of those mega industrial clippers because my little Andis could hardly get through his butt hair.  I also left tracks everywhere because homeboy is still learning how to stand still.  They’ll grow out… right?

Or I could just never clip after the solstice again. That’s not a bad plan.

I learned that Murray will tie with the halter around his neck while I clip his face.  At first he was confused and concerned, then he was annoyed.  The whole thing amused me greatly.  Also homeboy had little scabs all over his face which ALSO made clipping really hard because I kept catching them.  Sorry, Murray.

I made a big deal about putting his blanket on and taking it off while he was tied because he was giving me the stink eye and running away when I lifted it up near him.  I’m sure it didn’t help that on Monday he somehow wiggled out of it (without breaking any straps?!) and (probably) terrified himself in the process.

Murray got some turnout and did his best to drain the arena by drinking the puddle down.  Because dirty arena water is the best water. 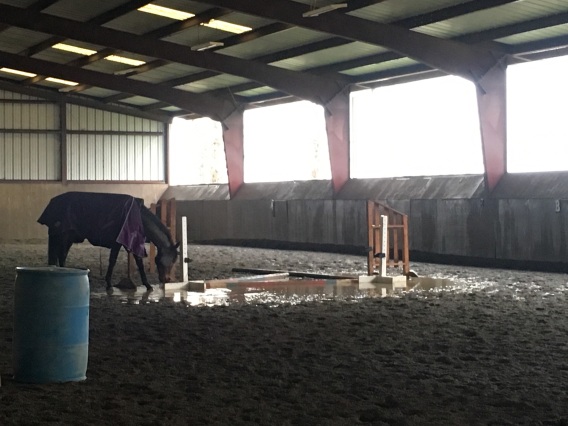 That’s been our week. Hopefully this weekend I am well enough to ride, or at least lunge.  I leave you with a super accurate depiction of my horse when he hears his neighbor’s grain bucket being filled.