Per my goals post, a big one for me and Murray is to stop taking short cuts.  I don’t really know where to start with this, there’s no clever preamble to this stuff, I just need to dive right in.

I have skipped a lot of steps in training Murray in favor of funner/better/other things that I wanted or felt like I needed to do.  After three years we still can’t reliably tack up while tied, let alone stands still for grooming and tacking up like most other non-feral eight year olds.  We can’t use the cross ties, don’t stand for the vet, still freak out when people move things nearby (especially blankets), have knocked down at least two people on the way to turnout, break away from the trailer half the times we go out, and still can’t use cross ties.  And that’s just things on the ground that Murray can’t do.  I would list the things we can’t do/suck at while lunging, doing ground work, or under saddle except I just started that and it was super embarrassing so I deleted them. 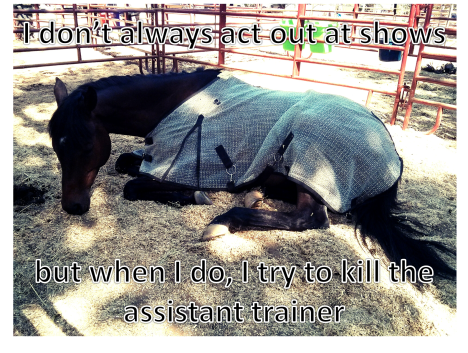 When I first started working with Murray I skipped things like really, properly working with him to tack up while standing still because I thought that with repeated exposure he would just… figure it out.  Other horses do that, right?  Later, I just wanted to get to riding.  I know how to work around his wiggling and get him tacked up so I can just go and ride.  I am very talented at doing up all the buckles on his bridle while he’s wandering off, and tightening the girth while he circles me suspiciously.  I know just how to lunge so he doesn’t stop and turn in on the circle.

After three years together, Murray and I know each other well enough that we can get some things done.  But just because I can do it with him doesn’t mean that Murray “can do” that stuff.  I can just trick, needle, or bribe him in to it, and it’s unreliable when most other people try.

But honestly, these are just the glaring holes that I’ve left in Murray’s skill set/training.  Even under saddle, and especially in dressage, I skipped a looooot of steps.  Not always because I just wanted to get on to funner things, but I’m not going to pretend that wasn’t some of the reason.  Trotting in circles working on connection, gaits, and relaxation is boring when the progress you make from day to day is miniscule, backward, and/or generally non-linear.  It’s a lot more fun to have a stab at putting on leg yields and do it with varying levels of success and correctness and then move on to walk to canter because those are pony dancing moves, right!?! Right? 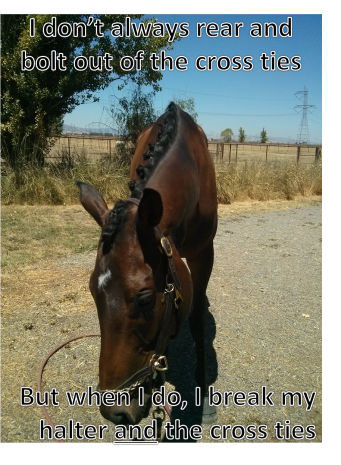 So I just… skipped to the fun stuff.  A lot.

I think everyone does it.  There are always times when you just want to get past the babyness or silliness or garbage or whatever and do something else.  A lot of the time I suspect there is no lasting effect — someone is having an off or funky day and can’t figure out how to ground pole so you just skip it for a ride — and you get on with your lives.  But in my case, I’ve ended up with a horse who dances around and still panics while I’m tacking up, walks away while I’m  bridling, can only be ridden and handled by a literal handful of people, and has a pretty reasonable number of days where we can hardly get anything done.

Murray has also learned a lot of things.  I’m not trying to have a (full blown) blame game here.  I can actually get him tacked up, ride in all kinds of different arenas, jump all kinds of different things, and do some pretty solidly 5-6 scoring pony dancing moves.  We can walk from the barn to the turnouts in the pitch black or with a scaryscaryscary patch of light from a flash light wobbling in front of us.  I can put his blanket on over his head or over his back.  We can really do leg yields and even some counter canter loops — sure, they need polish, but we can do some shit!

It’s time to really get the rest of that stuff done.  Even if it means I don’t get to ride that day because I spend all my free time working on basic ground manners or getting Murray to stand properly for tacking up.  No more short cuts.  It’s time to train this pony right, from the bottom to the top.

I don’t have a fully conceived plan for everything I want to get done.  A lot of it just involves making a point of doing stuff that Murray purposely doesn’t want to do – like walking with impulsion and connection.  Even if it means we never trot that day.  Even if it means Murray kicks out and flings his head around.  We must be able to do these things.

Making Murray a well rounded and well-broke horse is worth it.