This past Sunday my trainer hosted a clinic with John Michael Durr, which despite an extreme lack of money right now I chose to participate in.  I have known of JM for a few years, but other than watching his go at Rolex in 2014 had never seen him ride.  A few weeks ago he came and gave lessons to a few people from our barn who all raved about him, and so we clinic(k)ed.  And it was great. 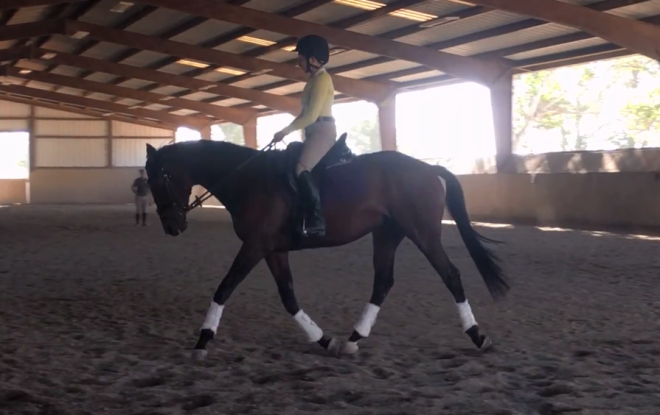 Spoiler alert: sometimes we look like we know what we’re doing

We did a double day, with dressage in the morning and jumping in the afternoon, since we didn’t quite have enough people to justify two days.  Murray has been so great in dressage lately, as I have described ad nauseum, so I wasn’t really sure what to expect during our lesson.  Obviously we had lots to work on, but what part of the “lots” would get targeted?  The basics, of course.  It’s always the basics with us.

I thought very carefully about what I would say to JM when asked to introduce ourselves, and ended up telling him that we were coming back from 6 months of 1-2 day a week rides and Murray had just now started to become steady and confident, whereas before he was tense and stressed out.  I didn’t want to unload on JM three years of woes and training debacles, but I did want him to know we were in a place that was new for both of us.  Since Murray came out looking and riding like a drunk monkey, JM immediately honed in on our lack of power and behind-the-leg-ness. 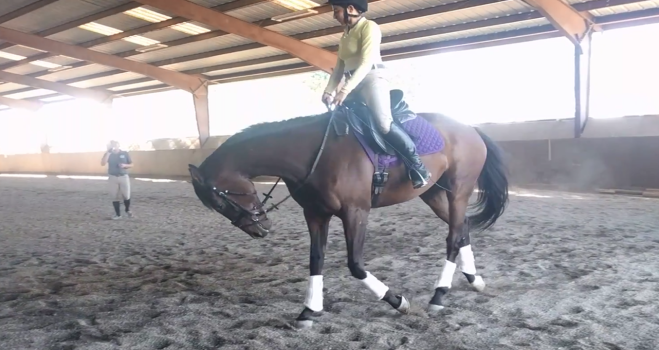 Instead of riding him like he is four different pieces of horse that I’m trying to rally together all on slightly different schedules (fix the haunches, catch the shoulder, neck what are you doing! ribcage, get your shit together, etc.), JM said that we would be riding him very, very, very straight (which is also what Megan said, and I promise I really have been trying to do that!!).  This, in turn, would translate into a greater transmission of power from hind quarters to forequarters.  I was instructed to slow his front legs down with my thighs and quicken his hind legs with my seat, ride only straight lines and 90 degree angles, and do it with a slight counter flexion (except in the corners).

Totally easy right? Only like nineteen new things for me to focus on!  Not a problem.  Fortunately, Murray and I already have some concept of the thigh half halt, so I knew what to do with that, and add energy with the calves was easy enough.  JM coached me (step by step where needed) through the straightness and the corners, so we got those done too.  Murray was confused and fought the idea at first, but quickly came around.  And wouldn’t you know it: POWER!!

Oh yah actually I can step under with my hind legs if you ask right, just look at my bulging Arnold Schwarzenegger muscles

We did the same thing at the canter (though there is no photographic evidence as I apparently only cantered far away from my photographer), and Murray thought that was really hard.  Like, exceptionally hard.  He would rather make his trot MUCH nicer than work that hard at the canter.  To keep us on the straight lines at both the trot and canter as we got tired JM emphasized the idea of keeping control of my belt buckle.  If my belt buckle was pointed away from JM (the center of our square), then obviously we would move away from him.  If it was pointed toward him, then we drifted toward.  At one point as we crossed a short side Murray got really confused about a possible change of direction and we swerved wildly, which earned us the reprimand of “your belt buckle is drunk!”

Oh also I can lift through my withers, did I not tell you that?

This was even more important at the canter as I had to sink down through my back into the saddle but half halt with my thighs at the same time.  It turns out that I’m a pretty loosey-goosey canterer, and after a few squares pushing Murray with my seat + calves but half halting with my thighs, all while following with my hips and sinking down into my back, my entire body was protesting the hard work.  It seems that Murray and I will both be working up to longer intervals of this intensity.

Ultimately, both our trot and canter work felt more powerful and forward.  I couldn’t always feel when Murray lifted himself up to the saddle (or lifted the saddle, I can’t quite remember), even when JM pointed it out.  But that’s ok, I’m sure that feel will come.

JM said that he was surprised that Murray made so much progress during our lesson and that he lasted as long as he did, since it was quite a workout.  I retorted that it’s  because Murray knows what he’s supposed to be doing, but has trained me to let him go other ways.  JM disagreed and said that I was giving Murray too much credit, and that he really did need to learn how to use his body in this new, more effective method.

Can we just appreciate this picture again for a moment, and how much Murray and I look like we know what we’re doing here?!

If I can ride like this for one frame, surely there is hope for me?!

For homework, I have been prescribed six weeks of straight-lines-only flat work (I may make curved lines while jumping, evidently) in short, intense bursts.  Lots of walking in between, and not too many reps per ride.  (Like, a few minutes each way, tops.)  I am to finish with some stretchy trot work with counter-flexion, and if after two weeks things are going well I can do counter-flexed figure 8s at the trot.  JM said that if I did my work properly I should see muscle development behind the saddle by his next visit.

In conclusion: 10/10, would ride with JM again.  Our jumping lesson in the afternoon was just as good (recap to come tomorrow).

Oh also, I rode in my buband. I’m not sure I liked it, I think it made my boobs look flat and deformed.  However, I didn’t jiggle at all (not one bit), and I felt like I was being hugged for much of the day (human thunder shirt?).  It did give me an unflattering mic-pack look at the back of my shirt, though.  This device will require more investigation.

12 thoughts on “your belt buckle is drunk”