To cap off my mighty nice weekend, I went XC schooling on Monday with my trainer and my RBFs.  It was so awesome that the trip turned out to just be the four of us, as it really suited each horse and rider’s needs perfectly.  Trainer B took one of her OTTB projects, RBF-Q took her baby OTTB she got in January, and original RBF took her moving-toward-BN-baby OTTB.  It was an OTTB-tastic adventure!

Ever since I got to watch all that cross country running at the event I was desperate to have a go at the WSS course, and even more desperate to have a go at the Novice course there.  WSS is a great move up venue because the course is on the soft side for the level — there are full size fences, of course, and some good questions for every level, but overall the entire course is not full of level-sized questions.  Which means that it was PERFECT for me and Murray to get some Novice schooling chops at!

We started out warming up over low logs, as usual.  RBF-Q has never taken her baby (Logan) schooling, and he’s been struggling a little with understanding jumping at home.  He’s very smart but not the most confident boy in the world, so if he struggles to understand a question it really knocks his confidence down.  Logan was quite convinced that logs are not for jumping, so B took RBF-Q and the baby over to some even tinier logs on the ground and they practiced just walking back and forth over them.  RBF and I watched from afar as Q and Logan walked, then trotted, then cantered over some teeny logs and then had a nice little gallop back to us. 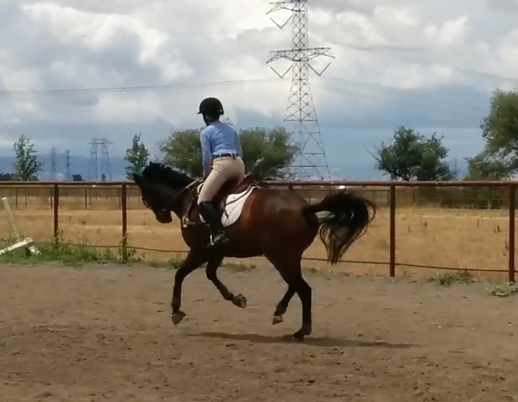 Both Murray and G, RBF’s dark handsome supermodel horse, were full of the sass out on XC — kicking out and jumping around and shaking their heads.  Murray even tried to pull some G-man moves, throwing his head down between his legs and shaking it and wiggling his body.  It was absolutely hysterical, as this is NOT a typical Murray move, but a very common Gryphon move.  Gryphon was just as celebratory.

The fourth fence on the Novice course is probably the biggest question on the Novice course, a full height-and-width table on a very slight uphill slope.  B told me to push him forward to the fence and ride it in an open stride.  Murray had been super active and forward so far so I thought that would be easily done, and when I sent him toward the table he was in attack mode.  The last three strides to the fence I could feel him shrinking his stride, so I rebalanced a bit, and then we got SUPER deep and he launched over it and climbed it.  I think he hit the table in front and behind, and I could do nothing but pat him and commend him for pushing through my fuckup.  B told me to try again, but this time push forward to the spot — even if it was a deeper spot, ride forward to it instead of picking back to it. 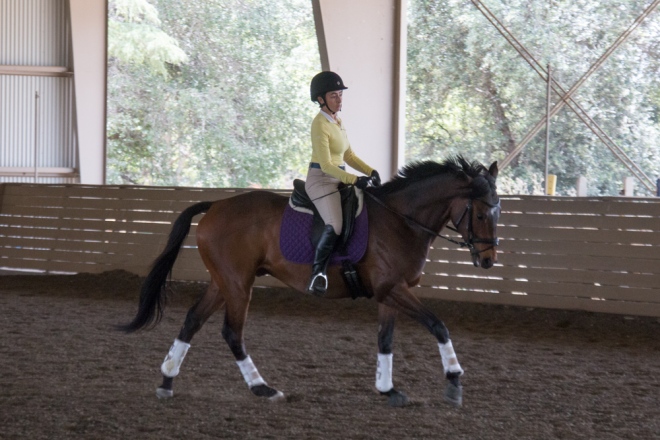 Why can’t we have uphill XC canter in dressage?!

I opted to jump the smaller BN option next to the big table for my do-over, to avoid the stop I thought Murray might throw in if he had bad feelings about the big table.  It was the right call, because I felt him shrink back away from the BN table about five strides out, so I really pushed him forward and even though he took it deep, we got there on a good stride with a good pace.

We also hit up our old nemesis the downhill log, and I had absolutely zero qualms about trotting it after seeing plenty of pros doing so at the event and hearing Yves advice.  When we were course building I had also laid out a VERY generous ground line with bark (which was pretty bright red), and it was absolutely not a problem.

In the meantime, RBF and G were happily schooling lots of BN options!  G was like “what is the big deal, guys?” and cheerfully attacking all the fences.  G had a bit of a dork moment at the up bank where he took it super long and then landed a bit funny behind and used it as an excuse to party down a little bit.  When she went back to the fence G got the perfect spot and was like “wait, I want to party but I don’t seem to have a reason to….”  I had so much fun watching RBF and G take on the bigger fences, they both were so joyful when they succeeded — which was every time. 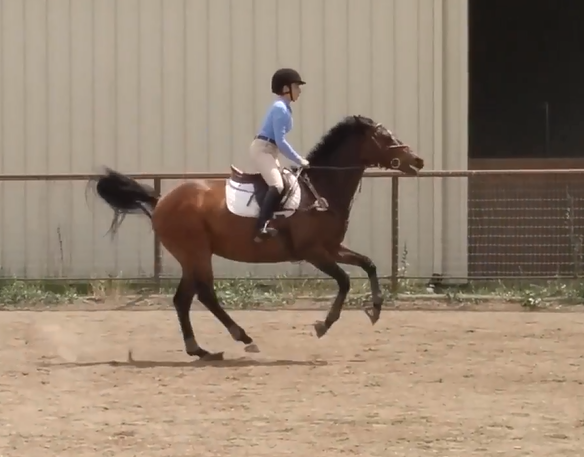 RBF-Q and Logan got the chance to school a few more little logs as we moved back to the water, and after a few more fences Logan was like “OH FUCK YEAH I GET THIS NOW!!”  It was awesome to watch the cogs turning and see him grow in confidence and understanding.  I love seeing how baby horses learn!

Murray and I did have one stop, when I saw a really open-strided spot to a ramp coming out of the water and didn’t keep my leg on.  But I turned him around and we went right back to it without issue.  The brand new coffin complex also posed us a bit of issue, but since the ditch is reaaaallly wide I just kept pushing him toward it until he decided that it was, in fact, jumpable.  I guess black-painted ditches are a bit scarier than the others we have encountered so far! 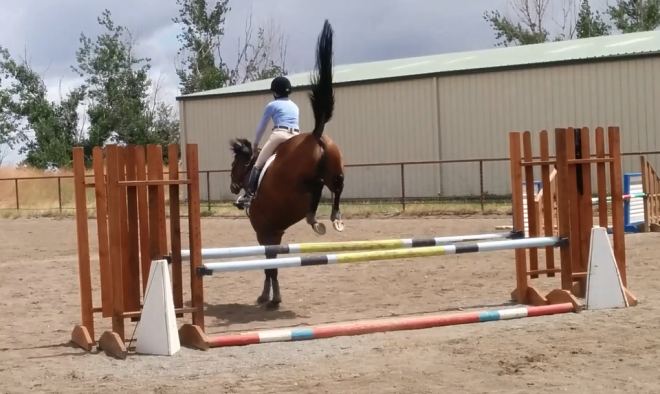 Basically, Bestieland schooling was a huge success.  All the baby horses got their learn on, and Murray and I schooled the entire Novice course!!