First Megan and now L wrote posts about the realistic awards their horses would have won, and damn.  If that wasn’t an almost-blog-hop made for me.  Frankly, Murray needs all the awards he can get, especially if I have any hope of getting a magnificent ribbon blanket sometime in my life.

2011
Most Likely to Lay Down on Hot Walker

Okay, so technically a superlative and not an award.  Self explanatory, either way.

2011
Did Not Buck Jockey out of Start Gate

Murray’s jockey did not know if she would make it through his first race.  She did, and three more!  We all know who the real star is here.

Murray fully deserves the cutest face award.  His cute ass face won over many a girl at our barn who gushed over his adorable two year old self and wanted to ride him.  It even scored him a super home as a trail horse, where he actually ended up being a pasture ornament.

2013
Defeated All The Working Students

Murray’s greatest accomplishment of 2013 was probably defeating every one of the working students asked to ride him.  In the end it was a lone eleven year old who put in the majority of the rides on him, though my RBF did some as well when she was back in town.  But through a carefully planned strategy of refusing to be tacked up, pulling back, dumping saddles, and lying down when mounted, Murray let eeeeverybody know that he is NOT a cheap date.

2013 (award to Nicole)
Learned to Tack Up Murray

This was probably MY greatest accomplishment after coming home from Congo.  To learn how to tack up the four year old ninja known as Murray.

Sometime in 2014 Murray transitioned from needing to be untied and walked during all tack ups (and frequently being lunged prior to being tacked up) to being able to be — occasionally — girthed up while tied.  It was a very proud day for me.

His powers of persuasion were incredibly strong.

Murray has always been a late bloomer.  Sometime in his five-year-old year, he finally reached the logic and reasoning skills of a three year old horse.  Barn manager, body worker, and dressage trainer were all immensely proud.

All was forgiven because this is still true. 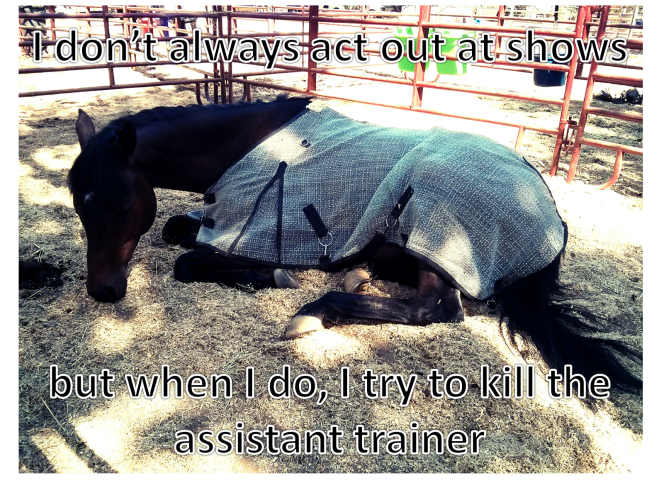 2014
Got Loose at All Events Away from Home

Didn’t survive a single event in 2014 without a loose Murray incident.  On the upside: learned to carry extra halters, lead ropes, and reins everywhere.

Murray looked like a baby horse for an incredibly long time.  I felt bad riding and competing a foal.  It was weird.

This one time I took Murray away from home and he did not rip away from the trailer or break his halter or get away from some person’s control a single time and it was magical.

Murray saved my life on XC by avoiding all jump judges at all costs.  His incredibly brave and technical evasive maneuvers are probably the only reason I am alive today.

Murray previously hated my RBF because one time I accidentally put him on crazy supplements and then had her ride him and not only did he pull back and lay down on her saddle, he then threw an epic tantrum under saddle and had to be schooled for an hour.  That was in 2014.  Two years of treats later, she is finally forgiven!

Murray saved my life on XC once again by avoiding all jump judges at all costs!  I don’t know what I’d do without him.