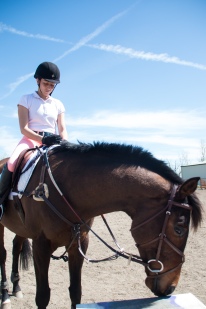 On March 26-27 my barn hosted Hawley Bennett for a jumping clinic, so of course I had to join in after I had such an outrageously good time auditing last year and immediately vowed to myself that I would ride with her at the next available opportunity.  It also helped that March 27th is Murray’s birthday, so what better present for the birthday boy than to ride with an Olympian? None. The answer is none.

Hawley was just as forthright, focused, and fun as I remember her being, and the fact that she said my horse was cute and should be competitive was a pretty big plus.  But let’s start at the beginning.

With all groups, Hawley started out with pole work.  Nobody was exempt from trotting poles set on a circle (two steps apart), not even the babies who may not have trotted poles in a while.  I watched the groups ahead of me and tried to soak in the advice, as I mostly put Murray over straight poles not curved poles.  The most valuable piece of advice that I heard was to keep my hips pointed in the direction I wanted to go — i.e. AROUND the circle.  Thus, when I got into the circle exercise I kept pointing my hips around the circle and Murray just turned through the trot poles like we trot poles on a circle every day of our lives.  In reality it was like attempt number one.  Cue pride.  And if you press play, you can hear Hawley layering it on too (spoiler alert: I was WILDLY proud of Murray during this clinic and Hawley did nothing to stop me from being so!).

We moved from there to canter the poles and Hawley expected us not only to get one stride over the poles, but to get the same number of strides around the circle each time too.  Headed left Murray demonstrated his incredible rideability and awesome steadiness by getting an easy 18 each time.  To the right I struggled a little more and got 20, 16, and then finally 18.  Much of this was the shape of the circle (I let him fall out to the left and then pushed in too far to the right), but also spoke to Murray’s weakness tracking right.  Fortunately for me since Murray got the exercises pretty quickly I had plenty of horse left for the funner stuff.

As last year, the course consisted of some kind of ovoid-of-death to lines across the diagonal and on the vertical, which Hawley had walked and wanted us to get pretty precise striding to.  Hawley had even pulled out some weird, scary filler which I was a bit worried about, but planned on just riding to and not making excuses for myself.

Our first task was to ride the oval at the end with six strides between each of the two fences, and a steady thirteen along the long side.  Once we had accomplished this we added in our first oxer (the pink, I know not an oxer in this image), in six but I rode it in eight at first (crooked and spooky pony), then all the way around to the three stride (four my first go around) green-blue line and back to the ovoid of death in six.  The key was to ride forward and evenly.  Despite making a big deal about the striding, Hawley said she actually didn’t mind that Murray kept wanting to add — as long as we rode forward to the add.  I wasn’t allowed to let Murray back off to add strides, I had to keep my leg on and push him forward.  Hawley likened the strategy to one she took with her former horse Bodark (not an almost-comparison I mind!), who would balance himself up and add add add in to a fence, but would go as long as she kept her leg on.

This picture tickles me

We rode different combinations of the lines, always starting or ending with the ovoid of death.  Hawley increased the difficulty based on the weaknesses of the horses in the group — so for right drifters, she added in a hard left turn from the pink “oxer” to the three stride line in the back, and then 90 degree left turn to the four stride line.  Murray is not a right drifter, but my lack of planning and excitement at getting through combinations occasionally bit me in the ass as I did not prepare for the next line. So instead of getting excited about jumps I’ve already completed I need to remember to keep my mind on the task at hand — i.e. the jumps I still have left! 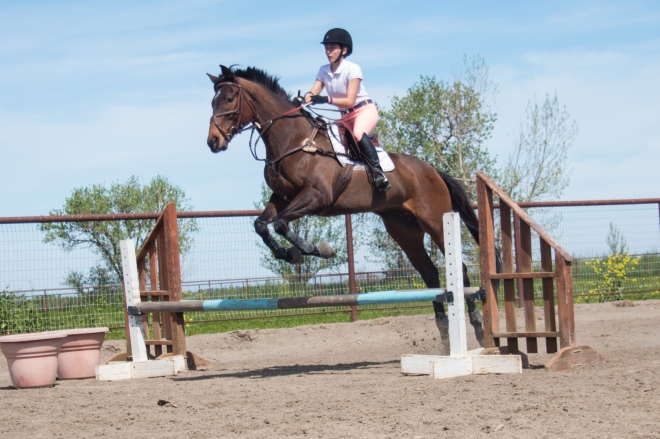 Look at us jump 2′ oxers! wheeeeeeeeeee kings of the world!

I was really proud of Murray’s rideability during the whole clinic — we could take pretty much any corner, and he responded to me putting my leg on either side with great reasonability, even if he didn’t get all the way over when I needed him to.  The only thing I was a little disappointed by was the jump size — Murray’s and my problems increase as the jumps go up, so I would really have liked to problem solve over bigger fences.  But in all honesty, it was probably good the jumps were small because it meant that I could easily kick Murray up to anything even remotely scary, and when I pushed for a long spot it wasn’t an issue.  And honestly, if I couldn’t perform the exercises accurately over 2′-2’3″, I’m not sure that trying anything higher would have been productive.

At least we can still jump!

I also worked pretty hard on my own position during the clinic, and am proud to report that I didn’t let my reins get too long or get picked on by Hawley for my reins, or my leg, or my upper body.  Not bad for seven rides all March prior to the clinic!