I accidentally took off blogging for Lent.  (Actually, I reduced almost all the fun things in my life by a lot for Lent — riding, blogging, reading blogs, having fun, etc.)  I say accidentally because I am not nor have I ever been religious, but somehow I went into thesis lockdown mode around the beginning of Lent and came out of it around Easter.

And now I return. Trimphant.  Or triumphant adjacent, as I didn’t finish my thesis but I did get two chapters really nailed down and the third is underway. 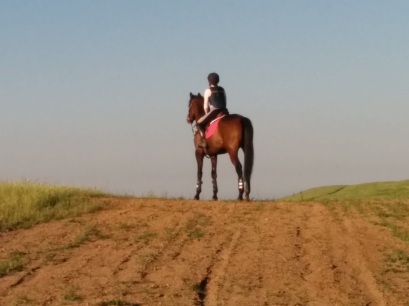 We did get to do some XXXXXLLLL fun things towards the end of March and last weekend, starting with a Hawley Bennett clinic and ending with the best weekend all year — ADULT CAMP!

This year, one of B’s friends who is a dressage judge heard about our camp and thought it sounded SO FUN that she offered to come up and do a fix-a-test clinic with us for our dressage rides.  So an absolutely huge shoutout to Kalli Bowles for coming out and providing such excellent feedback.  I got on Murray and he was super quiet and responsive for warm up — a pleasant change from our previous attempts at dressage away from home — and he remained so quiet and reasonable for both our tests.  Plus our outfit was on point, so you know. 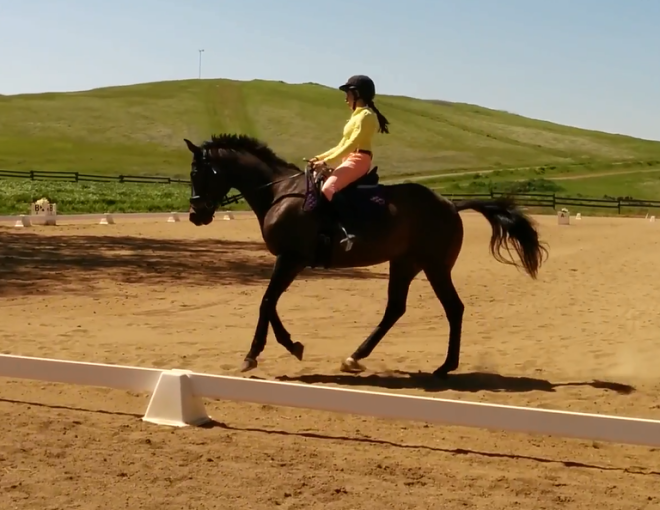 I went in for our first test and rode Murray exactly as I would at a show.  I focused on the things I knew I could fix without pushing him to be as good as he can be at home, as I know that can encourage Murray moments.  I rode the geometry hard, because I know that’s the only place I have left to be able to pick up points, and tried to keep my leg long and my hands up, and an even pressure between my hands, and Murray was so reasonable.  He just bopped along like the little dressage professional I’ve been trying to coax out for the last three years!  Kalli said that we put in a great test — good geometry minus some pilot error, and a very steady ride.  Steady is our number one goal, as almost all of my point deductions in the past have come from our inconsistent nature — in both contact and overall picture.  Her biggest suggestion was to increase Murray’s loin suppleness, as he braced in down transitions and wasn’t really swinging through his lower back.  I could tell this (as well as how crooked he was) from the ride, but after a month of 1.5 rides/week and then a quick jump week before the Hawley clinic, I was going to take it!

Our second test was even better.  Knowing that Murray was feeling good I went in and really pushed for the connection.  I still biffed some transitions due to not knowing the test, but Murray responded to every one of my requests for more with “okay”.  Kalli scored this test, and among lots of 6s and 7s we even got two 8s and only one 5 (the fetid down transition).  I have never been so proud of Murray — every time I asked for more he responded instead of reacting, and we put in two really solid tests in a scenario that has historically made him lose it.  I am really  hoping we can repeat this at the show in a few weeks.

Friday afternoon was stadium, and I applied some of the lessons from the previous week’s Hawley clinic and my subsequent jumping lesson with B. Murray’s and my issue of sometimes refusing fences for no apparent reason hasn’t completely gone away, but I’ve developed a much more reasonable strategy for dealing with it, and we only got better as the weekend wore on.  I only had one stop at a slightly scary fence, and our rides through a one-stride grid were pretty fantastic, so I’m not complaining there.

Saturday morning we schooled cross country and I could not have been happier.  Murray was so fun and cheerful and pleasant out on cross country — the happy, lovely boy that I know is (almost always?) in there.  The same principles applied as in stadium — keep your leg on and commit to the fence, and you will go.  Even if it wasn’t super pretty the first time, we got over it, and things got smoother as we schooled.  We got to school much of the Novice course as well as the BN course we will be jumping in a few weeks, including our first little jump-drop combo:

I have to give some big credit to my friend Anna for making me jump that.  After she schooled the training and prelim questions she told me I had no excuse not to… so I did it.  And it was fun!  I suck at drops still, but once again, if good horse will go, let’s go!  We ended up schooling the fence that ended the training course last year again, which is always a nice little confidence booster.  I’m not sure what I’m more proud of — that Murray was willing to go over the arrow even after nearly coming to a dead stop in front of it, or that we did it nicely a second time.  Both are really reasonable responses to that question!

Training arrow at Camelot from Nicole Sharpe on Vimeo.

The only discussion Murray and I really had to have at camp was on pace.  Murray decided that a certain tractor and gravel pile was just an unacceptable addition to the XC course, and he would not — under any circumstances — canter or gallop past it.  The first time I got him to trot by, but the second time he was so wrapped up in his own sense of self-and-Nicole preservation that we basically backed past the scary objects.  The frustrating part about this wasn’t that Murray was scared of that stuff, but that he didn’t listen to me asking him to slow down so we could pass them at a more reasonable and less terrifying pace.  Instead, he wanted to balls to the walls gallop down to them and then screeeeeeeeeeeeeeeeeeeeeeeeeeeeeeech to a halt when he realised what terror awaited him.  This, of course, will not be acceptable when we actually try to run cross country.  So I schooled all around the terrifying hell tractor and its accompanying murderous gravel pile at a slow canter with Murray firmly bent away from said objects.  As long as we kept the gait I was asking for Murray got lots of pats and encouragement, and after all was said and done we walked up to those things and showed Murray that, really, they weren’t so bad after all. 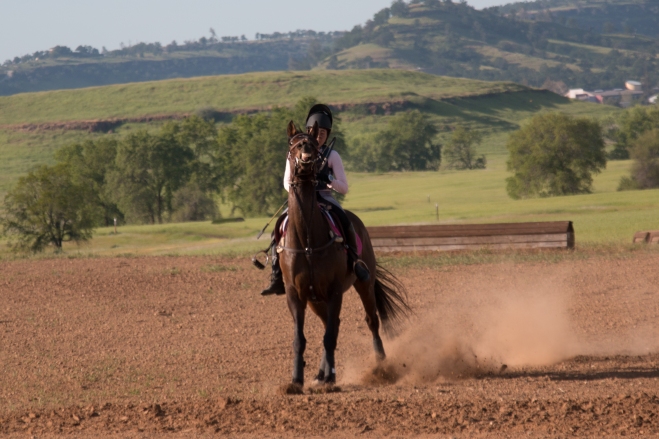 Sunday morning saw us putting in yet another really solid dressage test and a fantastic stadium school over some big, scary, FULL GROWN beginner novice sized fences.  But there was terrifying new fill and Murray JUMPED IT ALL. Stuttery it may have been, but we WENT.  And if I can just stay out of his way enough, we will not have rails either.  With the best weekend all  year in the books, I return to thesis land and Murray gets a few days off to recuperate before we work on some suppleness and straightness before our show on the 16th!

PS — We did it all on only three shoes.  In fact, I need to text my farrier!  Friday morning before we left I discovered that Murray had wrenched his left hind shoe 4/5 of the way off and rotated it about 90 degrees on his foot.  Magical barn manager pulled the shoe off with her bare hands, did not compromise any of Murray’s hoof wall (she is magic, after all), pulled out one errant nail that was hanging down, and we went on our merry way.

PPS –  did you know the flying potato got to come too?!  But I will leave that story to Peony…. 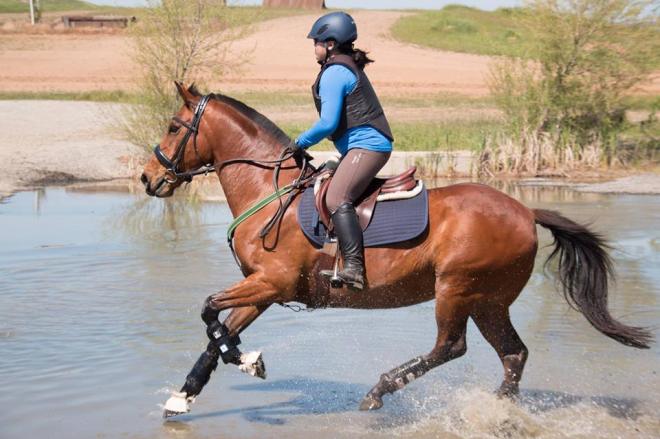