Murray and I had our first jump lesson in a little more than four weeks on Wednesday.

Spoiler alert!! We can still jump.

Look at this freaking adorable baby horse jumping!! Jumping around April 2014, when Murray was five. AWWWW.

If you don’t recall, back in early January Murray decided that jumping was both too physically and mentally taxing for him.  I decided that if he felt that way we would just take a break and trouble-shoot some things and dressage ourselves until we desperately wanted to jump again.

There were a few other changes that happened between then and now.  We moved jumping from indoors to outdoors due to the outdoor arena drying out quite a bit (no rain in weeks! pooh).  Plus, a delivery of new footing for the indoor made it a bit sketchy for jumping.  I put Murray on MagRestore instead of my bargain-basement magnesium, and I’ve not seen any major changes.  I also got him a sleazy, which appears to work like some kind of pony Thundershirt so that is amazing.  And my coup-de-grace was splurging on Performance Equine Nutrition’s “FOCUS”, which I keep calling the “magic drug”.  I’m annoyed to say it might be working*. 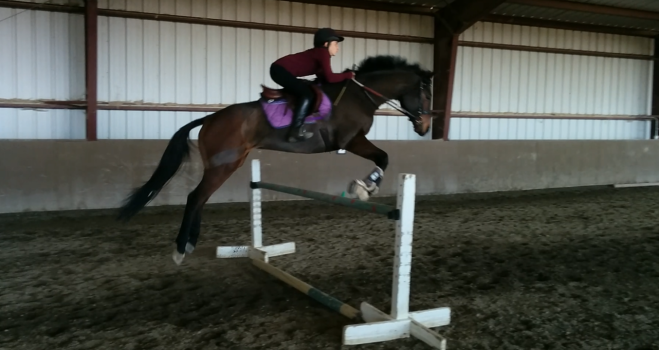 I tried to apply my newfound dressage principles to Murray and encourage him to do the right thing WITHOUT forcing it or making it a point of argument, so he doesn’t get frustrated or resistant to the idea.  That meant I asked for nice round transitions but didn’t throw a tantrum if I didn’t get them.  I also did lots of patting and rewarding for a bigger trot, but didn’t go nuts with the kicking over it.

Since we only had a few jumps in the outdoor arena we just strung them together and then reversed the course.  Warm up was problem-free, and B commented that she hadn’t seen Murray so cooperative and willing in quite a while.  When we came up to a fence with a fake potted plant as filler Murray took a hard look but I kept my leg on and we went, even though it was a little stuttery.  I praised him HEAVILY for making the right choice.  Like threw away both my reins and snuggled his neck. 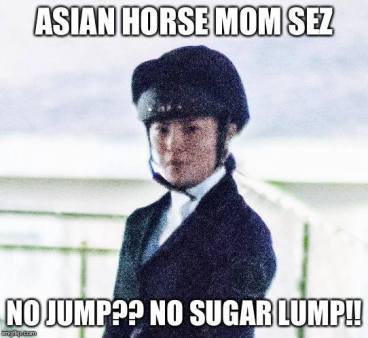 Once we started stringing the fences together B started putting them up each time we came around.  When she added a flower filler on top of a small log stack I tried for the longer-but-still-good-spot we had been getting but Murray was like “oh, actually, no.”  We re-approached and made it over, I just had to sit back and keep my leg ON, and not anticipate the fence since Murray got in pretty deep.  Coming up to the potted plant in the other direction Murray also got a little squirrely a few strides out and I didn’t keep my leg on enough and we stopped again.  One more approach and we got over — but we took it pretty deep again.

B added some more strange filler into one of the other fences, and I kept my leg on and Murray LAUNCHED himself over it.  I even felt him twisting in the air as he stared at the log under the fence, which made me giggle.  A few more of those later, and we called it good.

aww, that jump looks so small!

So the good news is that my horse can still jump.  Duh.  The bad news is that he just doesn’t want to jump exactly the way I want him to jump right now.  Which, considering I’ve been pushing the idea of jumping from a more open/longer spot on him for the last two months, compared to the 2+ years he’s preferred to take fences a little closer to the base.  That Murray isn’t entirely comfortable with this new way of jumping should surprise absolutely nobody — least of all me.

I have a pretty developed thesis regarding why Murray objects to some things and not others, which I will share with you tomorrow.  I hope to add to it hilarious sketches of Murray’s brain exploding, which I’m pretty sure has happened at least a few times.

* It’s annoying that this stupid supplement is working because it costs $20 for 7 doses, and is soooooooo out of my regular budget.  But for $20 I’ll take the extra focus at shows.  As long as this thing turns out not to be fucking hokum.