Skip to content
Homenot the good kind of funk

I spent much of today feeling rather… blergh.  I have to re-investigate a part of my analysis that I thought I was ready to just put behind me, and the fact that I have to open that whole can back up irritates me.  That was but a minor part of my mood, though.  I recently found out that a family friend is super irresponsible with animals (one of those who adopts pets just because the kids think they are cute, then return/rehome them when their landlord demands it or the kids grow tired of it) and I can’t seem to get over it.  I’m not close with this person and could not have stopped any of this before I found out about it (but you can bet your sweet ass I will be opening my big, fat mouth in the future), yet the feeling of anger and disappointment is hanging over me.  This categorically puts this family friend in the “you are a bad person” category, where once they were just, well, a well-intentioned dullard. 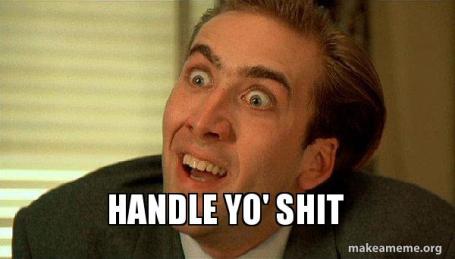 that shit being not getting pets you can’t care for

But the bigger piece of the down-home funk is that Murray has been not quite right for much of this week.  Now, all of the horses have been stuck in their stalls since before the new year, as the steady rain (thank you, El Nino, I don’t even care that it is unpleasant because we need this) has kept the pastures 8″ deep in mud.  Murray’s been working a bit harder, and the footing in our indoor is due for replacement.  He’s been a little stiffer on the left hind than usual, and I even saw a bit of a short-step at the walk when I took advantage of the empty arena to turn him out. But there was no head bob, he didn’t seem in pain, and is otherwise frisky and generally Murray-ish so it definitely fell into the most irritating category of possible horse lameness.  I’ve never had to deal with it before (I know, I know, I’ve been lucky), so it’s a new adjustment and feeling for me.  My dressage trainer, with whom I had a lesson on Wednesday night, thought it was possible the lower joint in his hocks are fusing — apparently very common in sport horses? — but it was total speculation based on watching him go during my warm up.  (More on my lesson in a moment.)  He’s also felt a little off and hunchy in the canter, but not his usual hunchy-evasive with a hollow back.  More super-stiff-backed and sucked behind my leg while making a rolly, porpoise-y back… so weird.

However, when I lunged Murray on Thursday he was pretty even across both hind legs (I did bute him last night), and did his Murray-best to make me feel better. All I wanted was for him to spin around on the lunge line a little and assess his soundness, as well as let him get out any yayas stuck in there.  When I moved him out on the circle Murray frolicked in his most foalish fashion — throwing his legs in all directions and tossing his head down — but as soon as we started going on the circle he was all “business”.  “Business”  being a lazy, shitty trot.  We are working on it.  A few more episodes of antics — though nothing at all what I expected was hidden in there — and we determined that he was moving evenly behind and I can probably ride tomorrow, but we will continue to assess daily.  The ridiculous, nonsensical frolicking improved my mood greatly. 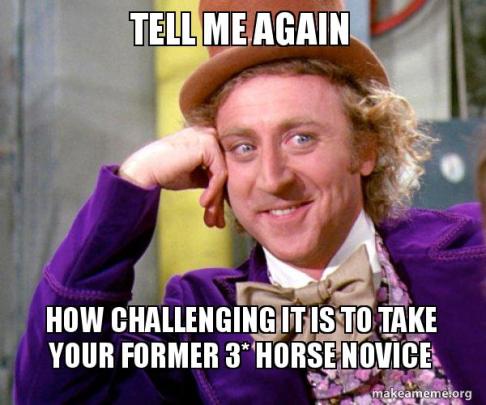 I’ve been giving him some bute, and just letting him sit isn’t going to do anything for him if it’s a stiffness/soreness kinda thing.  So work goes on.

My dressage lesson was very interesting.  Murray was stiff through his back, as usual, and not quite right.  Tina really called me on my rein length, pointing out that Murray is much fussier when my reins are floppy, and when I actually push him into a steady contact he is quieter.  We worked on using the lateral work to get him round, and Tina suggested I ride him always with a little bit of the shoulder-fore feeling to encourage him to really be round.  This is especially helpful now that Murray has discovered he can intentionally put his haunches to the inside and pretend I asked him for it which, most of the time, I did not. 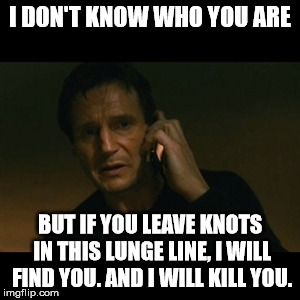 Since the indoor is (f0r) now our only arena and there are almost always fences in the way there is limited work for us to do the counter-canter.  And, since Murray was stiff and a little fussy already, Tina did not want to introduce the full counter-canter figure eight.  Instead she had me work on flexing Murray to the inside and outside on a big canter circle, getting the feel of the counter-canter without having to actually find the space to do it.

Tina didn’t have me work for long, but Murray was exhausted at the end of it.  Not sweating necessarily, but really struggling to keep himself together.  This was probably compounded by his soreness/stiffness/offness.  I am always really interested in how this happens, though.  Murray works, four or five or six days a week, and we work pretty solidly.  Then we get into a lesson with Tina and he is like “oh my god I am DYING right now” after a quick 30 minutes!  Tina is generous and gives us lots of walk breaks, and somehow Murray is like “I’m dying. I’m simply dying.”  So clearly… I need to work more like that on my own, because that is probably more like real work.

This week’s images brought to you by: my honest, irrational, rageful, and sometimes inappropriate feels.

15 thoughts on “not the good kind of funk”