Penny’s puppies are five weeks old, though I took these pictures when they were four-and-a-half-weeks.  We arbitarily-ish decided that they were four weeks on Monday 1/4, and since Penny is giving us bigger, sadder eyes whenever the puppies latch on to her, we started feeding them “solid” food.  By which I mean pulverized puppy food mixed with some puppy formula and water.  Most of the puppies took to eating solid food immediately — especially the big boys — though a few of them did need us to stuff a little bit of the gruel in their mouths and direct their noses to the dish before they figured out that we were offering them something they did, in fact, want to eat. 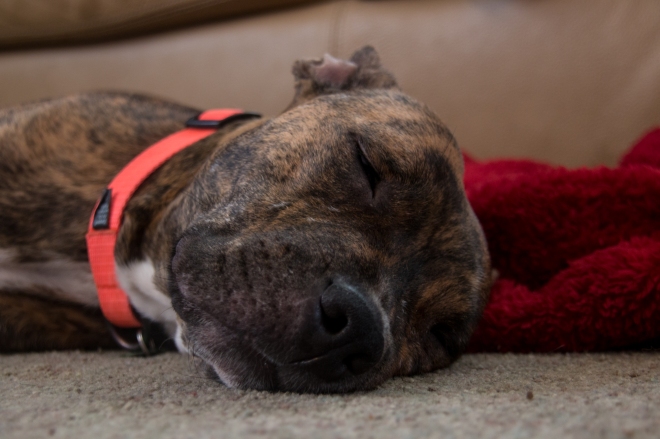 We also finally let the foster-kittens meet the puppies this week, and they were hysterical together.  Only one kitten was really interested in the puppies, but he was so gentle when he played with them, never using his teeth or claws, and kindly tolerating the puppies chewing him or attempting to put his entire head in their mouth.  Ya know.

We are really starting to see differences in the puppies’ faces now.  I think the big blue boy below (Andre) has strong bully-features.  His head is really round and broad, he has serious wrinkled, and his top incisors are close together and have a little bully snaggle.

Whereas Max (below), though just as big as Andre, has a longer, smoother face.

It’s all speculation at this point, of course.  But it’s fun speculation! 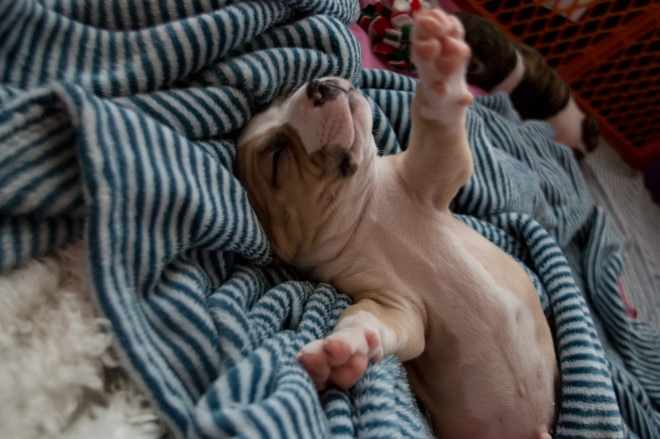 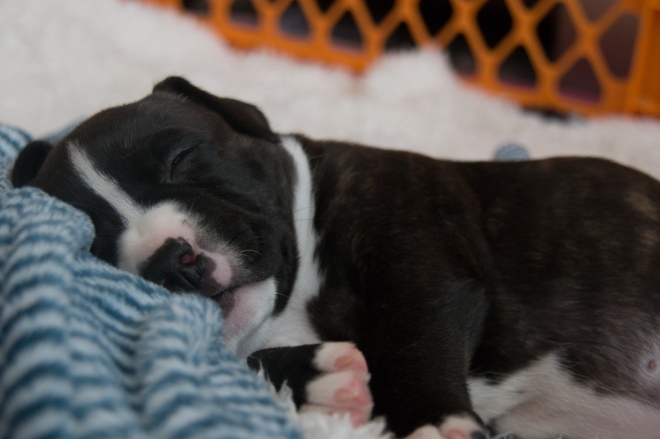 Inigo Montoya is one of the best, because he plays and plays and then crawls into your lap to go to sleep.

The puppies are so much more mobile now, and while their playing and romping still has an element of un-coordinated-ness to it, they are basically “full grown” puppies now.  In addition to nail trimming the puppies now get to experience the vacuum cleaner — and not just from inside their playpen — and bathtime!  They are incredibly people-oriented, so we’ve been trying to follow some good-puppy-raising guidelines and encourage them to be calm (well, as calm as a puppy can be) before feedings and before getting picked up and played with.  Soon we will have to start working on bite inhibition and teaching them the appropriate ways to play with people — i.e. less with their mouths.

Humperdinck IS America’s Next Top Puppy Model!  Also, my friend tells me that the little crease you can see in his ears indicates that they will “rose”, or turn up-out the way pibble ears do (as opposed to laying flat like a Dachshund or perking up like a fox terrier).