I busted my ass on my thesis last week, which was why the distinct lack of writing here.  I was barely riding, and basically just programmed R all day for three days so didn’t have much left in me to write at the end of the day.

I just got “When Two Spines Align“, and the first few chapters are — SHOCKER — all about position.  Since this is something I really need to work on, I’ve been starting all of my rides with some stretching and flexing exercises that will hopefully help me even out my body a bit.  One of my biggest problems is dropping/falling through my right hip/shoulder.  It’s not just my shoulder that scrunches down, but my body is just… scrunched on that side.  Unfortunately, I can’t fix it by just stretching down through the right, because my shoulder is already dropped right.  It’s just my hip that is held up somehow!  Ugh things to work on.

Thursday I got on Murray with the intention of having a nice, basic warm-up-for-the-week dressage ride after a few days off, and Murray let me know that he was feeling both cold backed and annoyed at my stupid position exercises and I felt him get scrunchy and accordion-like in the bad way as soon as I asked him 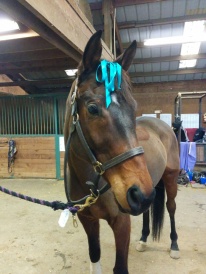 to trot.  I’m getting a lot better at anticipating when Murray needs to just get some yayas out, and sometimes we can just canter it out, but at that point I’d backed myself into a corner and couldn’t get out of it.  So I got the trot transition I “wanted” — but ugly and impolite — and Murray immediately transitioned to a wild, uncontrolled, buckanter, careening through the middle of a dressage lesson while I shrilled apologies at my trainer and her student.  B was laughing and laughing at us, not only because I couldn’t steer, but also because Murray decided he would use the full extent of whatever height he had and looked about 17 hands tall.

But after that, we got some relatively good work done.  In addition to working on my position I’ve been trying to add some new elements to our riding and crisping up some movements that I’ve been letting both of us get away with.  One of them is trot-canter transitions.  I tend to crunch and fold forward when I sit through canter transitions, and Murray couldn’t handle me sitting through them in the past, so I trained both of us to make the transition while I posted.  It actually worked out really nicely, as his back comes up it meets my seat and I can then transition nicely into the canter.  But that’s not what we’ll need to do in the future — with sitting trot in our future someday, I hope! — so I focused on sitting through the trot-canter transition.

At first Murray was confused and interpreted the outside leg as an aid to move his haunches over — an effort I really appreciated!  So I tried to half halt him first and then “windshield wiper” that outside eg and Murray was like “oh right, I know what you want, spastic trot!”  Uhhh nope, sorry.  I tried again and booted him with my outside leg when he didn’t get it, and more spastic trot ensued, so the next transition involved a little whip smack and that got his attention.  We’ve since practiced a bit more and Murray is okay with the transition in both directions.

During our next ride I tried to tackle the Devil’s Transition with really really really really no success.  Murray does not seem to understand at all that you can transition from cantering to walking without trotting or stopping in between.  And when I think about it, it makes sense.  I’ve definitely seen Murray canter to trot or GALLOP HIS FUCKING ASS OFF to a  four foot skid at liberty, but I have never seen him canter to walk.  And I’ve definitely felt Murray canter to NOPE in front of a jump, but no canter to walk.  Canter to sideways, yes.  Canter to stop, yes. Canter to walk? Not a thing.  BUT… he has four legs and can canter to halt, so canter to walk is in there.    So I gave up on the canter-walk and just crispi-fied the walk-canter, as in the process of trying to activate some canter-walk I had allowed walk-canter to turn into walk-spastic trot.

There are lots of pieces in the bag right now.  I can feel them there, like scrabble tiles, actually.  I know that I have all the pieces to put together something like canter-walk or more counter-canter work but sometimes I just can’t always pull them all out in the right order.

6 thoughts on “mountains and molehills”