My third quarter goals post was a little disorganized; a bit of a shambling-rambling mess.  But there were a few things in there that I can pull out logically:

So how did we do on those things?  First off, no new jump saddle: HOORAY!  I just shoved front shims in my Ecogold pad and that solved my saddle fit problems for now.

Let me just plug Ecogold here for a second — when I contacted John, of Ecogold, about needing shims not only was he extremely helpful, they were free.  John sent me a set of 3/4″ front shims for my flip half pad and a full size 1/2″ insert for the flip pad — which would decrease the overall padding underneath my saddle (otherwise it would be a 3/4″ shim atop a 3/4″ insert).  He also suggested a few different combinations of shim-pad-filler-cover that I could try, and my shims arrived two days after our conversation.  WTF IS THIS MAGIC?  I love you, Ecogold.

I also have been working hard at shortening my reins.  It feels unnatural to me, but it is honestly better — I can reach my hands and arms down to give Murray more space to stretch, but I don’t hang out with my hands in my lap.  I do consistently try    keep my reins shorter, and Murray has relaxed into this new relationship, so I’m going to call this one completed also.  Maintaining the elastic contact is a little more challenging, but it’s the same level of challenging that it was when my reins were too long so… ya know.  I have made progress here though.

Acceptance of leg pressure… well, we’re getting there.  I’ve realised that I’m pretty soft with my legs and don’t ask appropriately — I give up too quickly.  So this is going back on the list for this quarter, and I’ve been incorporating a little bit of Jane Savoie into my rides when I add leg — I say “go, go, go” aloud.  Because rarely am I just adding leg, usually I’m rebalancing in some way.  To this goal I’m expanding that I need to be able to add leg and have Murray respond promptly.

I’ve done a pittance of pole exercises.  Let’s not talk about it.

Gait lengthening, actually, has been kindof a success!  During my dressage lessons I’ve been told to lengthen a little, and when I put some leg on and push Murray can actually stretch out that gait in some balance instead of flailing!  THE PRIDE.  I HAS IT.  These need refining, but since I can access several lengths/speeds of gait at both the trot and canter, I’m quite happy.

Canter to walk transitions straight up didn’t happen.  We’re just not ready for them right now, the communication isn’t there.  It’s okay.  We will get there.

So, what is on the table for next quarter? 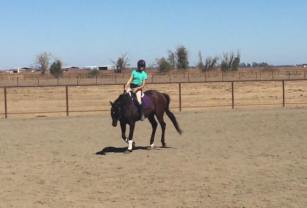 I want Murray to be responding to my aids promptly without reacting.  I want to be able to add leg and feel the corresponding surge of energy from behind.  This should be done without question.  Same goes for changes of gait — I don’t ask Murray to move from trot to canter so he can do it 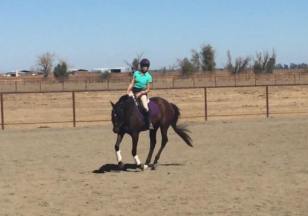 in his own good time.  This means that I have to be accountable for when I ask, but if I ask appropriately, Murray should do.

My own position needs a fair bit of tweaking.  The crookedness has reached all new levels of insanity.  I need to open my right shoulder/chest and follow with my right elbow.  I need 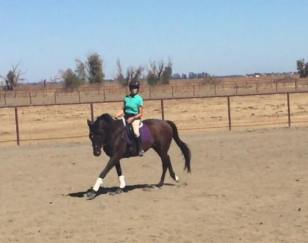 to stretch up through my left side and down through my left leg.  I need to twist my body in the direction of the bend without shrinking or crumpling.  I need to stop riding so unevenly that my stirrups are TWO HOLES DIFFERENT from one side to the other (what garbage is that, fucking unevenness!!!, makes me so mad).  As evidenced by the pictures at left I can even myself out when I try, so try I must.

I would like Murray to learn how to work over raised cavaletti.  I’ve already started this, at one of the lower settings on the cavaletti, but only one at a time.  I’d like to make a nice, concrete goal of having him be able to trot or canter over three raised cavaletti in a row, and not all on the lowest setting.  Obviously, I will have to be able to ride the corresponding gait that comes with.

Murray needs some work on limbering both sides of his body as well.  He’s quite bendy to the right, but is unwilling to give up his right ribcage, so can be rather, uh, unhappy to the left.  This is ultimately influencing more than just his bendability, and I find that his entire gait is messed up going left.  So we will work on limbering both directions.

Poles all over the world will stay on the list.  I will aspire to do a pole exercise — not just four trot poles! a real exercise! — at least once a week outside of a lesson.

Finally, I really need to start working on the sitting trot.  Everything — position, hands, connection, gaits — seem to go out the window when I try to sit.  But sitting trot is coming for me in my dressage goals, so I can’t keep ignoring it.  I’ll work up to it a bit at a time, with two strategies.  One, sitting successively more steps while posting 4-8 steps in between.  Two, sitting a slow trot and keeping it connected (hard, but possible) so that Murray isn’t jostled too much and gets used to the idea.

I’m going to hold the canter-walk transition on the back burner for now.  I’m not certain that I have the responsiveness or communication skills to work on it right now, and it’s not going anywhere.  If it comes to us, it does.  If not, well, it doesn’t.

GOALS.  WE HAVE THEM!