I had two very good lessons this week, which is a relief after last week’s shenanigans.  Tuesday I had a jump lesson with Alana, which revealed a few of my weaknesses but also helped me nail down how I need to ride to give Murray confidence right now.  It all started with the warmup X, which Murray trotted forwardly into.  Then he saw some scary stuff (jump filler) on the other side of the fence and off to the left, so he drifted right.  I thought we were going to drift into the standard and crash and panicked … and completely stopped riding.  Murray carried on with his forward momentum, felt me stop riding, crashed into the high side of the X, backed up, got the poles tangled in his feet, panicked, backed up some more, and spun around and stopped.

Which is, of course, exactly how one is supposed to ride a warm up X.  Excellently done, Nicole. 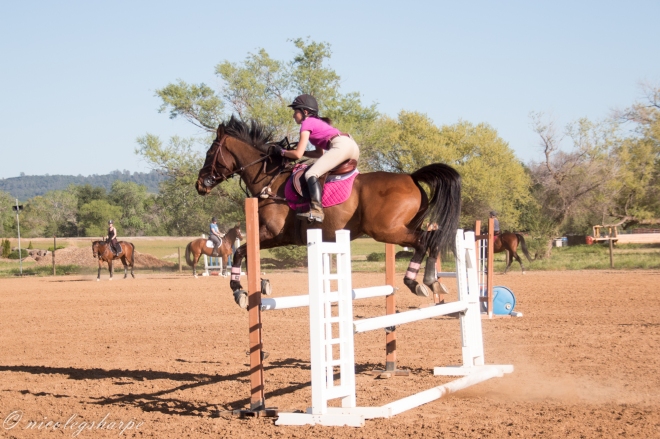 Alana stopped me and we talked for a bit.  I was feeling pretty sorry for myself and admitted that I just don’t trust Murray at all right now.  And Alana was like “Right, and nor should you. He’s not confident and is giving you no reason to trust him.  But you’re also not riding in a way that gives him confidence — you just stopped riding.  Instead you need to micromanage him a little bit until he is confident again.”

So we came in to the fence again and I kept Murray off my right leg and drove him forward and it was fine.  He jumped like a pro.  We cantered that fence both directions and off of all leads, and then added in another fence after, a 2’3″-ish oxer with flowers underneath.  I was sitting defensively coming in to the fence, but as we reached it I didn’t keep my leg on well enough and didn’t think Murray was going and saw a long spot and kinda threw myself at it and and and.  So of course Murray stopped.  The next ride I made sure the turn went just how I wanted it and kicked Murray to the fence, giving him no outs in terms of my position (sitting, straight back, leg on, but soft hands) and we sailed over just fine.

As long as I approached each fence like this, even the scary ones rode forward just fine. We dropped my stirrups (down three holes. THREE HOLES. What have I been doing with my stirrups riding around set for the legs of a toddler?!) and I kept my reins long so that I didn’t feel inclined to creep up Murray’s neck in an attempt to keep my hands soft.  When we came into the cordwood stack, Murray looked at it from far away and wanted to evade it, but I just kept my leg on and back straight and even though he backed off and broke to a trot and got disorganized he went.  And I managed to get him back and organized afterwards so that the following fence wasn’t a disaster either. 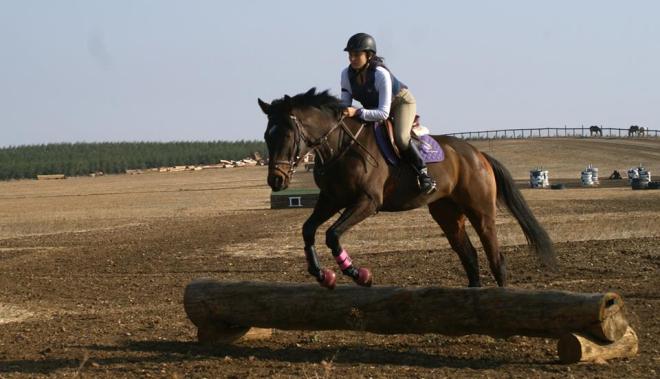 We coursed about 8 fences, nothing higher than 2’6″, just keeping my legs on and and reins long and a strong seat but trying to stay out of Murray’s way.  Nothing was spectacular, but we also didn’t crash into any more fences or have any more run outs. I’m to jump him a little bit 3x per week just like this until he remembers that jumping little things is totally blah.

Another moral of this lesson was that, at least for now, I am no longer to fight with Murray over things in the arena he finds “scary”.  When I’ve been bending Murray away from scary objects and pushing him towards them, he’s been responding by finding something “terrifying” on the other side to spook at.  Even if it’s just a funny looking patch of dirt or a jump standard in its normal and upright position.  Horrifying, I know.  So instead of picking a fight with him or even letting him have this fight, I am just to ignore Murray’s little-scary-things and keep focusing on the forward ride.  Inevitably, after four or five passes of an object, he will ignore it (mostly) and we can get on just fine, so for now: ignore. 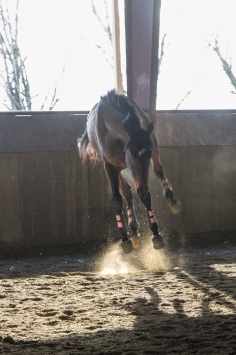 I’m also incorporating more fun stuff into our weekly routine, so Sunday morning I warmed up over a few fences (no problems as long as I micromanaged and stayed firm!) and then went inside for a little casual pole bending.  Cuz, you know, pole bending!  One of my friends is a converted Western rider, and she and I set up a set of six cones at 24 feet apart and took both Murray and her adorable QH through them.  We started at a trot and Murray was super game and charging through the cones, so we had a go at the canter.  Our first run through actually went pretty well — we stayed tight to the cones and Murray even got three changes.  Our second run through Murray was like “wait this was hard!” and bucked instead of changing… so I took that as suggestion to go galloping in the field instead.  Because nothing soothes the soul like a good gallop.