Right now there’s a moderately large forest fire burning about fifteen miles from me. It started on a windy highway near Lake Berryessa, when some likely jackhole probably driving way too fast crashed his car into the side of the highway, which was covered in dry grass and obviously lit up like the fourth of July. Between biking to campus on Wednesday at 2 PM and coming home at 4PM a huge plume of smoke started to cover the sky. My trainer’s house is in the area of the fire, and as soon as I found out they were evacuating (Wednesday) I texted her to ask what we could do, and was promptly dispatched to the barn to prepare for incoming evacuations.

Alana evacuated all the horses from her house and some from neighbors on either side and we ended up with 15 additional horses at the barn. We also got four goats, seven chickens, a cat, four dogs, and a pet ground squirrel. Everyone is fine. I ended up with a bonus dog for a

What was not fine were the horses we had to evacuate from one neighbor’s house. Without giving away too many personal details – because I literally know none! I didn’t even get the woman’s name – I can tell you with absolute honesty that it was an absolute shit show at that house. The woman had three horses and one of them had only ever trailered twice, another was essentially a corpse on three legs, and she had clearly only ever trailered a few times herself. She had not even thought about the best way to get the horses on the trailer. 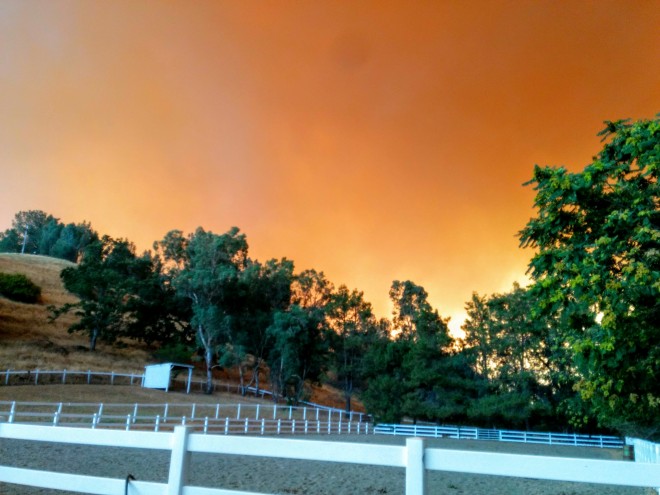 So we went about fighting with one horse, who was clearly an absolute spoiled brat that refused – flatly – to get on the trailer. He totally had his owner’s number and knew exactly what to do to unnerve her and get away from her. He threw his weight around, kicked, reared, struck, and broke away on multiple occasions.  After forty minutes of trying to cajole him in, we convinced to woman that he needed drugs, but even after ace-ing him he was steady enough to resist. Finally wehad to winch him into the trailer using a makeshift corral, and even then he nearly threw himself out twice.

All of this made me extremely grateful for Murray. He may be spoiled and he may say “no” to me rather more than he should but he will get in whatever trailer you point him at.

I get that it was stressful and suboptimal – perhaps that spoiled bad horse would have loaded just fine on another day given enough time and enough bribery. I doubt it, but it’s always possible. But all the horses that we have trained to get in trailers right off the bat had no problem loading when asked to, even with the fire cresting the ridge behind them!

Okay, perhaps no problem is an exaggeration, but they got on.

Anyway, right now everyone is safe and sound and the community in the fire zone worked hard to come together and get everyone out.  Now we just hope the weather is cooperating with the firefighters.

Considering all this drama around me, I thought I’d post a reminder-link about my “Good In a Crisis” blog.  Everything I said then applied to this crisis too!  I’m thinking about writing about evacuation plans too — mostly: have one and train your horses to trailer and accept that you might need to leave someone behind.  Especially if that someone is trying to KILL the people volunteering to help evacuate you.  Grumble.

And here is an article two LA Times reporters made about our barn taking in horses, and how the drought has affected us.  Murray is featured several times. 😀