If you saw my recap on Monday you saw under “ugly” that cross country had more than one mishap.  Don’t worry; I bought the professional video so we can all enjoy this mishap for generations to come.  There’s also a little bit of video from a friend, but it is a little disappointing because I was riding really hard yet I look kinda like a sack of potatoes up there.  Whatevs.

Instead of dwelling on how things went wrong fence by fence, since they all went bad basically the same way, I want to instead think about the bigger picture of things going wrong.  I will preface this by saying that out on course, and in the immediate aftermath, I had no idea what had just happened to make the ride so bad.  I mean, I knew what the proximate cause of all the fuckups were, but I didn’t understand why the course never got any better, why Murray couldn’t or wouldn’t just listen to me, and was both devastated and furious that I had been unable to adapt my riding to get it done. 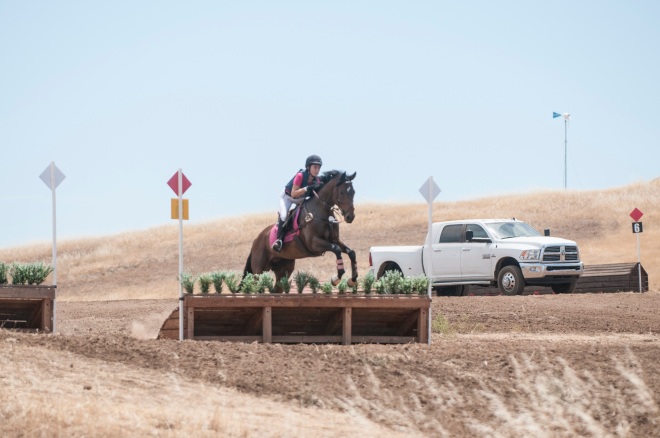 Getting it done at the scary brush rolltop

It started in warm up.  I felt Murray noodle to our first XC warm up fence (a small lattice coop) but I got him over it with a strong leg and words of encouragement.  Unfortunately he stopped at our next two XC warm up fences and I had to smack him to get him over them.  After all the times I’ve read that run outs are the rider’s fault and stops are the horse’s fault (and knowing there are caveats to this, like when I climb Murray’s neck and he’s like “nope too heavy for takeoff, Houston”) these stops were definitely on Murray.  I was balanced back on both of them, and as he rocked his weight back on to his hind I softened my hands to encourage him to use his body correctly, and instead of taking off he planted his front feet.

Ultimately, this is my fault too.  It’s a training issue that, somehow, I’ve let him come to think that it’s acceptable to stop thusly.  However, at the time I didn’t want to get into a huge fight with Murray in the warm up because a) show officials (remember how I didn’t want to be disqualified for horse abuse? I read the rule book section on horse abuse very carefully.) and b) getting into a fight with Murray has never the first ingredient to a good ride.  Sometimes it’s the fourth or fifth, but never the first.  Gotta give the princess some benefit of the doubt before resorting to the jockey bat.

Bad stopping pony. This was after his momentum change threw my forward — I assure you that I was sitting back right up until this moment, and he could easily have taken off had the urge struck.

After our third stop (at the up bank) I did give Murray a solid smack and rocked his world a little bit.  He hopped up and flung himself backwards a bit but listened to me whenever I pointed him at another fence in the warm up.  But as you can imagine that did not inspire great confidence in our ride.  I told Alana I wasn’t feeling confident, but I went on to the course with the intent of growling a bit if I had to and with the hope that my trusty XC loving Murray would return when he saw the awesomeness ahead.

Out on course I started as I often have – letting Murray pick his own pace (within reason), following softly with my hands, and rebalancing him as necessary, particularly as we approached the fences.  I’m pretty much never going to have to trip balls about speed until training or above: we’re fast enough that we’ll easily make optimum, but not so fast or talented that we’ll get faults.  The problems started with fence three where Murray first spooked at a jump judge and skittered sideways to the fence. This continued to be Murray’s MO for any fence where there was anything remotely scary nearby: spook and bulge to the opposite side of the scary thing (typically right but sometimes left).  I would then re-direct his attention to the question at hand (the fence), and with the exception of the trakehner he went over everything once reminded what we were actually doing.

At first I was really angry with Murray for not realizing, after successfully passing several jump judges that didn’t jump up and kill us, that the remaining jump judges on course were probably not going to try to murder us either.  I know, I know.  Horse “logic”.  I should lower my expectations.  In his mind, whatever behavior he was demonstrating towards the jump judges (DISTRUST! HATE!) was working just fine to keep us alive and therefore he must continue that behavior at all costs.  Sigh.  Our best fences were honestly the ones where there were no jump judges visible – the up bank, ditch, water, and canoe all warranted zero looks.  My barn manager Lisa (remember, Murray adores her above all else, and she’s a Murray Whisperer as well as generally fantastic read of horse body language and behavior) watched the whole thing and said that after every fence Murray just got more and more frantic and bunchy and that frenetic energy just compounded his fear of the random shit that was clearly going to kill both of us. 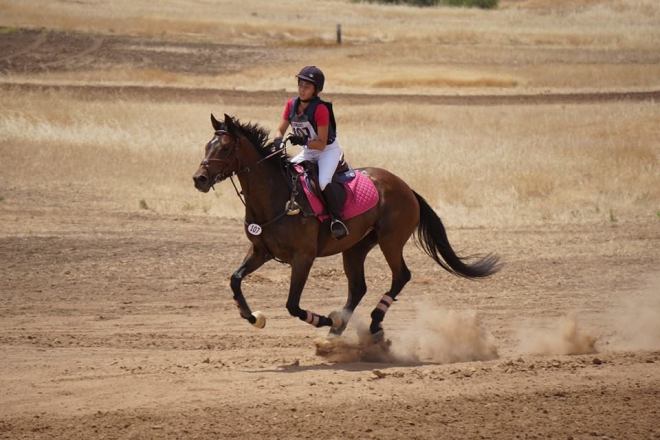 At least we know how to gallop

(When I first started this whole blogging thing, I thought about featuring “shit my horse spooked at today” Wednesdays or something.)

When I thought back on the course in the past few days, I really chastised myself for not containing that frantic energy better.  In a jump lesson before Camelot Murray got super disorganized during one round, but all I felt was this open, forward, powerful canter, and I misinterpreted his speed and gameness.  In my cloud of hindsight misery I kept dwelling on how things might have gone differently if I’d instead slowed Murray down and really forced him to get organized and focused on me between fences, instead of just seeking out the next fence and trusting his view of the next fence to get him organized.

However, upon reviewing the video it turns out that even with getting him balanced and organized before a fence, he wasn’t really focused, and was more than capable of unnecessarily looking out for scary things, so I feel a little less like chastising myself in that regard.

Typically when I am working with something scary at home, I demand that Murray soften and get his head down and listen to my aids and bend away from the scuurrrryy thing.  Once he’s done that, I then ask him to walk up to the sccurrrryyyy thing and make him touch it.  Typically we can then work past it just fine.  So while that works fine at home, it’s obviously not a viable solution for away.

Unless… can I perhaps walk him up to one of those jump judges next time?!!  Maybe I can yell “SCHOOLING!!!!!!” and trot him up to a scary jump judge and make him nose it then continue on our merry way?  As long as they don’t talk to us it’s not outside interference RIGHT?

As many times as I told people over the weekend that he was, Murray isn’t an asshole.  He’s not a hundred percent honest or listening, but he isn’t an asshole.  Most of the things he does aren’t out of some kind of defiance or annoyance, but it seems because the little cogs are turning faster than I can keep up with and he doesn’t actually trust me when I say that these things aren’t something to be scared of.  (Not an asshole, just an idiot.)

This annoys me, of course, because I’ve worked really hard for the last few years to get Murray trusting me and working right.  And for fuck’s sake horse, nobody wants to be nice to you except me, just cut me some fucking slack all right?  Whatever, horse logic, I do have higher expectations of you.  Alana and Lisa really think that Murray entered a place of extreme sensory overload, which got worse as the course went on, and finally hit his breaking point at a really unfortunate location.  This is corroborated by Alana’s observation that once I was off, Murray completely relaxed.  I was too fucking angry at him at the time to notice it, but apparently once I was on the ground he put his head into me and his scared, panicked eye disappeared.  He didn’t jig on the way back to the stall, he didn’t try to run away or spook any more, he just wanted to be on top of me (which you can imagine was absolutely the last thing I wanted from him at that point). 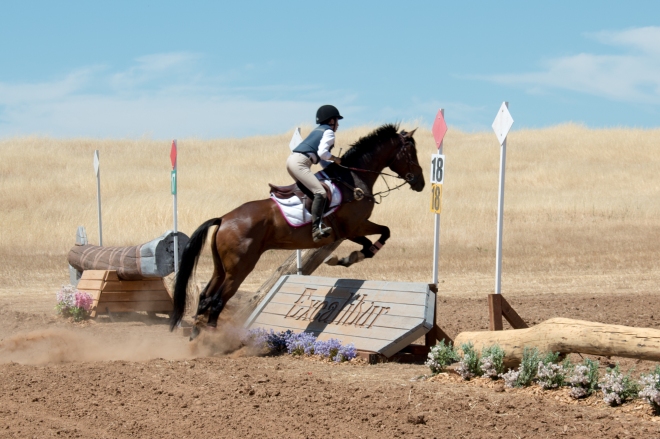 I hear that there’s a way to fix the overstimulation that comes with showing.  It’s called: more showing.

Yes, of course Murray, you would pick THE MOST EXPENSIVE POSSIBLE FIXABLE PROBLEM TO HAVE.  THANKS A LOT.

This isn’t something we can fix (easily) with just schooling.  Schooling isn’t scary enough – there aren’t announcers, fifty other horses, pop tents, flags, or jump judges.  Sure, I could invite two hundred of my closest friends to come and scream and carry on and make schooling just like a showing environment, but I feel like that’s a lot to ask even of my wonderful team. (OH GREAT IDEA: CALIFORNIA BLOGGER MEET UP?!  We will call it “bombproof the baby”!)  But we can work on it by going to lots more shows, to compete or just to school (so I don’t have the pressure of performing well, but I feel like if I’m going to pay a non-comp fee I might as well pay the whole entry fee and just accept many more eliminations), and going to all different types of shows.  Though schooling stadium on Saturday was fine, it wasn’t great, and clearly the distractions are going to get to Murray in that arena too.  So stadium schooling shows (or even little rated ones) will be a good idea too.  So hopefully we can get him over this. 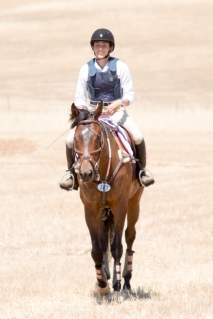 I’m also considering some kind of new supplement program.  Something with the word calm in it.  Perhaps that starts with “smart”.  I am also considering Quiessence, but when I tried it last September it most emphatically did not work, but if I can get away with making it free I’ll give it a go.  Obviously I will stop short of actually sedating him… maybe.  Additional considerations include poneh earplugs, and a shadow roll.  A shadow roll worked in the past with Quincy, who went over almost every fence with his head under his belly because he was so busy looking at things.  The earplugs will mandate a bonnet, which I have never been the world’s  biggest fan of, but as Lisa put it “what do you dislike more, bonnets or elimination?”

Blogland: I am open to suggestions.  Let them at me!

24 thoughts on “CEPF Horse Trials: where XC went wrong, and what I plan to do about it”