Well, this weekend didn’t turn out quite as expected. 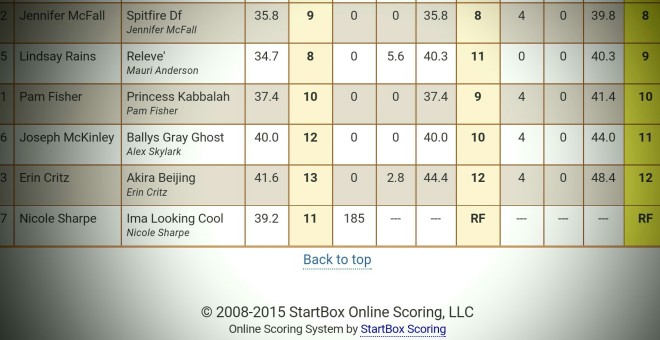 Going to go ahead and stay I still qualify as an honorary bad eventer.

It was an absolute emotional rollercoaster of a weekend, and before I get on a plane and go to a job interview (eeeek!) here’s a brief recap.  Details to come.

The Good: Murray warmed up just as expected on Thursday and I got all his bucks out before Friday dressage.  Dressage was excellent — Murray was a freaked-out giraffe going around the court, but settled once we got into the court and put in some good work.  Not our best work, but some really good work.  And he only misbehaved once — during the right canter depart — and despite getting the lowest individual score I’ve ever seen one one of my tests (a 3!), I still also got my lowest overall score (39.2)!  Elation!

Braids on fleek.  Is that the correct usage of “fleek”?

The Bad: On Saturday my bold, brave, forward XC horse was gone.  He warmed up sticky and spooky and we had a couple of refusals at fences we have schooled in the past.  I wasn’t confident going into XC and Alana told me I might just need to growl at him over the first few fences, but he should get into the rhythm on course.

The Hideously Ugly: Cross country was a fight.  It was not really fun.  Murray was looking for things to spook at, and he found them: horrible, terrifying, no-good, pony-eating jump judges, pop tents, flags, cordons, and the like.  Unfortunately, jump judges happen to be at every jump.  At more than once fence he skittered to the side close enough that one could have called it a refusal, but I somehow managed to keep him pointed at every fence and got him over everything without any backwards steps or refusals.  He was pulling, strong, downhill, and not listening.  And then at the last fence he’d absolutely had enough and stopped in the middle of the track between two fences and popped me out of the tack.  I landed on my feet, Alana ran over to leg me up, and I started back up after letting someone pass me.  He dumped me again.  I think I landed on my feet again, but got dragged through the dirt before I  crankily retired.

The Second Good: I did get to school the stadium course today and went back on cross country for some redemption.  It became extremely clear to me that Murray’s problems really were with the jump judges and other commotion and not with the fences themselves, as we schooled the last two BN fences without pause as well as the last training fence.  I left happy.

Camelot built themselves a grown-ass cross country course.  It was the most serious BN course I’ve ever seen (not that I’ve seen a lot), with lots of maxed-out questions and pretty much every type of question I’ve ever seen on a West Coast XC course, minus a Weldon’s Wall.  It started out serious and kept up the entire time.  The BN course was 1937 meters (~1.2 miles) at 350 mpm, for a 5:37 optimum time.

Fence one was shared with Novice and was a sizable but inviting log.  The terrain was gently undulating up to the log but not enough to scare you or back you off.

Jump two: a turkey-feeder heading gently up-hill from jump one.  Not too big, and not too scary.

Jump three: a bench with knights’ helms!  This fence was after a long gallop stretch down a gently sloping hill so required a balanced ride.

Jump four: the aqueduct that we have schooled many times.  This is a big BN fence, but somehow seemed very inviting on its uphill slope.

Jump five: after jump four you had to make a pretty solid rollback and head downhill to jump five.  I was most concerned about this fence, as we were coming downhill and I know Murray tends to get a little strung out heading downhill.  We were also facing the scaryscary castle (which, as it turns out, was not so scary) and Murray wasn’t super into brush the last time I pointed him at it.  Alana told me to compress Murray’s canter and ride him like we were stadium jumping so he didn’t have a chance to just drift out.  My corollary to this instruction was that if he was weighting his hind quarters at least if we climbed it he would have nowhere to go but over it. Following five you had to go downhill and make another rollback left to six.

Jump six was an up bank, which I also feel like is pretty large.  It comes up past my crotch which I know, from my extremely technical jump measuring technique, is 2’6″.  It rides really nicely, though.

Six was followed by seven, as Sesame Street taught us all, but also required a good rollback around the  novice house (with a T painted on the side) you see above.  This fence wasn’t super tall, but it was definitely wide and positioned downhill, so definitely required a bit of thought to ride.

Fence eight was my beloved trakehner, at which we picked up two refusals. I am going to jump Murray back and forth over this mother until he can do it with his eyes closed and his hands tied behind his back.  It is NOT big*.  It is NOT scary. I LOVE THEM, HE MUST LOVE THEM TOO.

There was a nice, wide rollback to fence 9, which was a red bench I have jumped many times before.  Nice and inviting, not too easy to run out around.  At this point in the course, I was contemplating exactly how much the event spend on flowers. 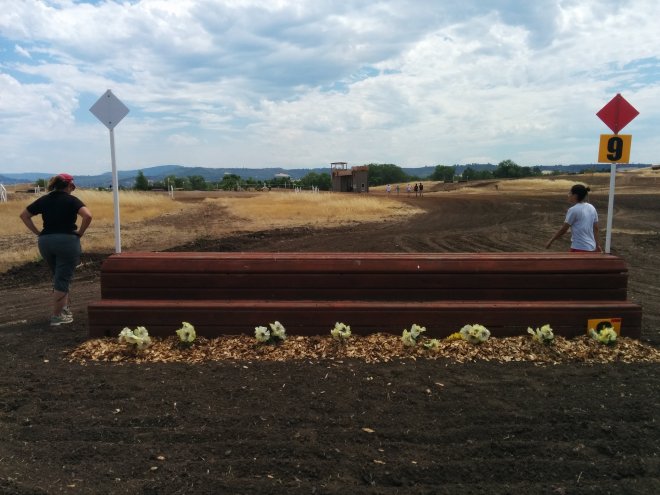 After this there was a long gallop stretch past the observation castle where you had to guide between two sets of cordons that were designed to keep horses moving the right directions through the water complex and (probably) to also keep spectators out of everyone’s way.  Ten was a small, electric purple rolltop that I was in love with, and eleven was the entrance to the water.

Twelve was my beloved canoe about two strides out of the water.  It’s small and not scary but I love its shape.

Fence thirteen should be a fan favourite: CAMILLE!  We got to jump her face which, once again, Murray was NOT concerned about.  What he WAS concerned about was the TERRIFYING JUMP JUDGE seated nearby her face. 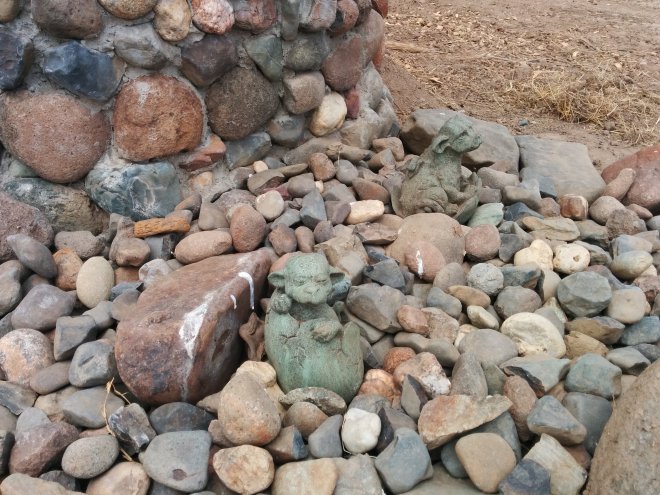 These are Camille’s babies!!

Fence fourteen was this magnificent bicycle rack that doesn’t look as big as it really is.  I have jumped this in the past, and I think they dug it into the soil a bit because last time there was a solid 4″ gap underneath it and it was definitely lookier.

The next two fences were a combo for the novice course, but not for the BN course despite the near-identical striding.  I’m not complaining.  A nice inviting house to a ditch.

You had to take the right path above to line yourself up correctly for fence seventeen, as it was angled pretty hard to the left.  However, seventeen was a pretty mellow fence for this course. 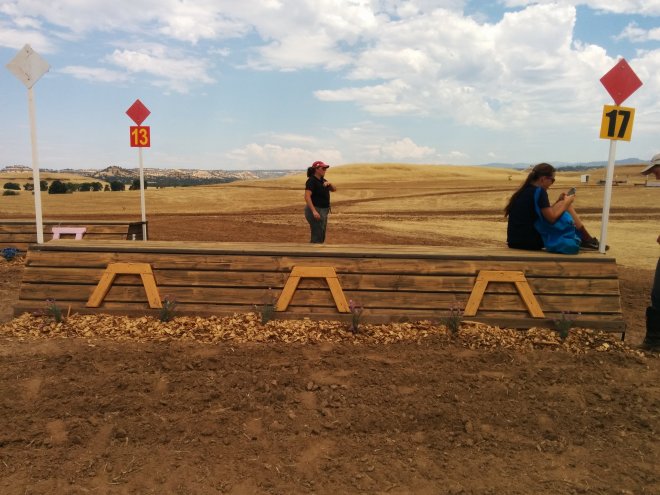 I was SUPER STOKED on eighteen and it made being unable to jump it even more upsetting.  For jump eighteen was EXCALIBUR!

I’m 5’1″ and this fence is basically half my height.  It rode super well (when I rode it, of course) though.  Of course, what you also get to see is my fantastic outfit of the only shorts I packed (I planned well) which are tiny and Australian themed.

Tomorrow: detailed recaps of all the reasons I cried this weekend. Spoiler alert: there are a lot of reasons.