I mentioned yesterday that my friend got on Murray at the end of my ride and I was really impressed with how they did together.  Murray is one of those horses that lets you know pretty immediately when you’re on his shit list.  Literally the second my trainer, the assistant trainer, or our barn manager’s daughter set their butt down in the saddle he’s ready for a fight.  He knows that they are going to ask him to work, and apparently takes great offense to that.  (This actually results in hilarity for everyone involved, as long as they have a sense of humor, because as mentioned previously, I find it funny when horses are cranky for no reason.)  To avoid this when my friends ride him, I always prime them with “just give him a long rein and the benefit of the doubt, and be light with your leg aids.”  The primer works really well, and has even allowed some of my friends to get real work out of Murray by sneakily upping the demands as they go along. 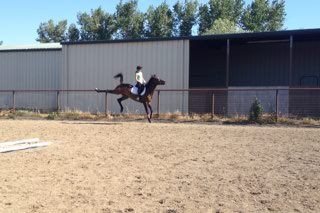 He’s very clear about his feelings

That little aside isn’t really the point of this post.  What I did want to talk about is how quietly and steadily Murray went when my friend (let’s call her B for ease) rode him.  B didn’t do a whole ton, just walk/trot/canter whole arena, but Murray didn’t fuss in the bridle too much or make any velociraptor screams or anything during the transitions.  B complimented him on being so light in the bridle and easy to steer (probably my favourite thing about him – turn your head, he changes direction! Mostly).  If I could achieve that level of steadiness for an entire dressage test I would be pretty happy with it.  And then I was like, jeeeeez what am I doing wrong that I can’t get that level of steadiness?

Tracy is right, ain’t nothing like an upcoming horse show to fill you with self-doubt.

So I’m probably going to get diverted in this discussion of my horse into some more general discussion of dressage philosophy, and what various trainers/people think is correct vs. incorrect.  To this end I’m not going to use any pictures of people I’ve shot at shows or anyone I know, just myself and famous riders/horses that I’ve seen on the internet.  I mean, if they put their pictures on the internet, they’re out there for all to see, and I feel that critiquing them is fair.  I know it’s a super controversial topic and I’d love to engage in discussion with you guys!  But I also want you to know that I’m not trying to offend anyone or criticize how you do dressage – you have your own trainers and coaches and I’m not you or them. 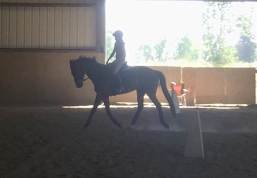 Not B riding, but this is kinda how Murray looked. Not quiiite tracking up, a little “forced” into a frame in front

He looked a lot like this, actually. Credit to Sustainable Dressage because it’s an amazing dressage resource.

So.  Dressage right or dressage… right?  As I said above, if Murray went around like he did with B in a dressage test I imagine he would have gotten a pretty reasonable score for the acceptance of the bridle/submission collective marks, as well as avoiding the ever-present-in-my-tests “fussy” or “above bit”.  I’m struggling to find a photo in my own records of how he was going, it was just not how I tend to like or ask him to go.  It was a nice frame, and at the same time an example of why I don’t really like to use the word “frame” when talking dressage.  Because despite it looking nice, and steady, and pretty much “on the bit,” Murray wasn’t really through or using his back and neck properly.  I like to ask Murray to really use his neck and back when we’re dressaging – and sure, I know I don’t get it all the time, but it’s what I’m aiming for – because I know these are things he needs to strengthen.  And when I can get him really using his neck and back, his whole gait changes for the better, more flowing, supple, and open.

Pic from the same day as above. A much more open, whole-body trot — WAY more how I prefer Murray to go around.

But I also know that at this level having Murray go around a little less through than I typically want isn’t exactly a cardinal sin either.  It’s not like he’s dropping his back and flicking his legs around at GP; this is beginner-novice test and there are lots of acceptable body shapes and frames it can be ridden in.  (I think? This is based on my experience watching lots of different BN tests get similar scores for collective marks and overall scores with, to me, very similarly-ridden tests in terms of geometry and accuracy.)

It makes me wonder.  Maybe I should have pla

nned to sacrifice a little through-ness and quality of gaits for some submission and quietness in the bridle?  Would we get a better score if I insisted on less push from behind and accepted a bit less correct use of his neck?  I’m not really in this for the scores but I’m totally kinda in this for the scores (I can’t heelllppp ittttt).  Scores are an impartial third party’s assessment of how well I’m doing in my training, and after all this hard work I’m at least a little invested in what they have to think!  But even more to the point, maybe Murray would be happier if I let up on him a little and asked a bit less of him at shows?  Maybe it would be better for him mentally if I didn’t ask for those really good canter transitions to the right that I know he has in him?  If I didn’t insist that we rode really through and supple and bouncy and properly?  Properly as I’ve been taught, of course.

This is a weird and interesting line of thought for me.  It’s not like I’m having to choose between Dressage Right and Dressage Wrong.  Nobody is telling me to crank Murray into a frame and ride him front to back (which is incidentally the back-to-front way to do it) and get him to break over at the third vertebra and ride him around with a big hollow behind the saddle.  That would be an easy choice.  There’s clearly no benefit to rollkurrrrring him in either the short term or the long term.  But I wonder what it would mean for our overall training if I were to succumb to that strategy — to let him run around a little more upright and falsely collected.  Doesn’t seem to match my overall training plan.  But… points on a test maybe?