Saturday’s little dressage outing with Murray went very well.  Not perfectly, mind you, but lots to be proud of, especially considering everything Murray’s been feeling/thinking/seeing/dreaming lately.  Murray walked right on and right off of the trailer, because duh, he trailers like a dream.  I think with a little practice I could teach him to self load, so that would be an awesome thing to do.  When we got to WSS he stood by the trailer like such a good little boy I felt compelled to take my first ever “see how proud I am of my baby horse on an outing!!!!!!!!!!!!” picture.

We had the horses on either side of the trailer, and I was surprised at Murray’s good behavior without a buddy for him to take comfort in.  He may honestly have been worse on the shady side of the trailer, since there was a pasture full of horses on that side that our trailer buddy keep staring at.  He didn’t escape, didn’t break his halter, and didn’t run away screaming “DOBBY IS A FREE ELF!” so that was awesome.  Tacking up wasn’t perfect, but I didn’t have to beat him in public or anything, and my saddle didn’t hit the dirt, so I’ll call that a win.

I hopped up and enacted my planned warm up strategy for shows: wander around all over the show grounds for 10 minutes on the buckle and let him get looky and then bored.  And we did both.  We looked, we spooked (one horse in a paddock tried to play with us and that was TERRIFYING), we followed other riders around, we engaged in Random Acts of Bravery (passing some FLAPPING FLAGS OH CHRIST!!!), and then when Murray was good and bored we popped into the warm up.  I walked around and asked Murray to be soft and round and he was! I was shocked.  So then I asked for some trot and boom — soft, round trot.  I was like who are you and what have you done with my horse?

You know, this horse?!

Anyway, after a short warm up — like, sub ten minutes, he was that good — during which we shockingly got all our transitions in, I headed down to the actual dressage arena.  Now, I had to get off and on and off and on Murray because all the gates needed opening and closing, so I expected Murray to be really foul because he would be convinced that we were actually supposed to be done.

In the dressage arena Murray was completely convinced the judges booth was demonic (from both directions), but I maintained my short reins and insisted that he listen to me, bending both ways on a circle around the booth.  I’m not sure if that’s allowed in real shows (errr, dressage queens want to help me out here?), but it worked pretty well.  I was really capitalizing on something Tina told me once, which was that when you can get physical submission out of your horse, it also indicates emotional submission.  In this case, I wasn’t looking for him to grovel on the floor, but merely accept that this thing I was telling him to relax around really wasn’t scary, and was worth relaxing around.  And it pretty much worked.

The test wasn’t perfect. It was weak in all the places it is always weak: walk-trot transition after the free walk (there’s only one walk-trot transition in the BN and Novice tests so I don’t know why I clarified this), the first canter transition, and during the right lead canter when he always wants to swap to the left lead, for some reason.  Like, stupid gorgeous clean changes for no good reason we are CANTERING THE EASY WAY DOPE.  I also struggled a lot with straightness, Murray popped his haunches in on every straight away.  He was also SUPER sensitive to my legs — he felt like a pinball bouncing around between them!  Any time I would feel him drifting out from the wall I’d push him back in and he’d practically be leg yielding over the side of the court, and then I’d try to catch him with my outside leg and he’d go binging back towards the inside.  I tried Amanda’s technique of the super-subtle shoulder-fore to both straighten him out and get a little more roundness from him, and it worked much better than trying to control his haunches with my legs. 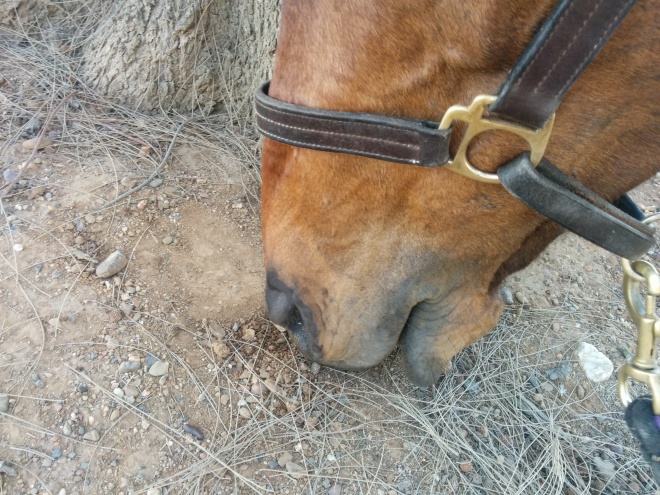 Murray later chowed down on some dirt.  And lay down under a tree which was soooo precious but I didn’t get a photo because … I’m slow.

There was lots to like, though.  Murray did manage to stay relatively relaxed and soft.  Keeping a more stable, though elastic, contact really did help a lot (errr, surprise?), both with me being able to correct and half halt quickly, but I think also with our communication in general and him being steadier in general.  He was pretty quick off my aids, and overall obedient.  But we are still struggling with transitions — not turning or circles, so much, but transitions between gaits when Murray doesn’t know they are coming.  I know that simply means I need to prepare him for them more adequately, but it seems that the things I do to prepare him for a transition at home do not translate to the dressage court.

Our first practice test was in the long court, which really gives you so much more time to prepare than in the short court, and Murray was fairly sweaty afterwards so I just did our troublesome bits again for practice.  I changed where I did the transitions though, so Murray couldn’t anticipate them.  The walk-trot was the only one that gave us a real problem, Murray did his newly-patented little “bulge my belly away from your outside leg when you ask me to trot” move, so I popped him a little with the whip to remind him that yes, in fact, whips are a thing in dressage land.  Exactly the lesson he needed. 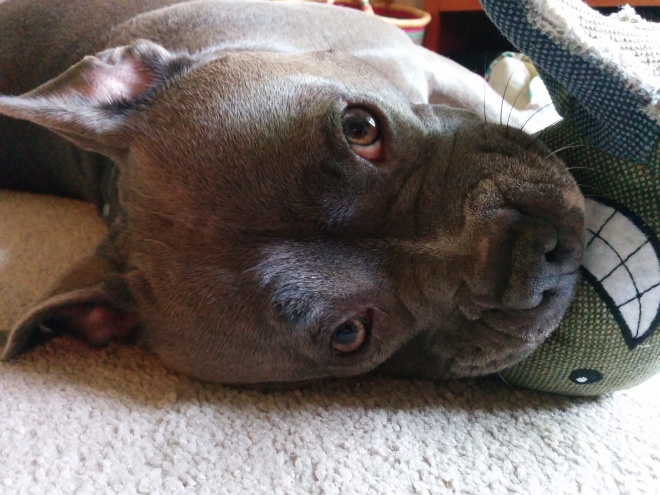 Ellie is so cute it’s hard to handle.

I’m pretty pleased that this dressage warm-up routine is showing promise.  Murray definitely did not act completely at home at WSS so I got to see how the long walk let him acclimate (and it seems like it did?) and that I could warm him up and then ride a test in a way that would keep us both relaxed.  I’m going to work on this some more at home, and hopefully I will be in good shape for future dressage shows!

On a related note, my coat and new white breeches should be arriving tomorrow, so that will be exciting.  But more importantly, I want to make myself my own stock tie.  Either of the tie-yourself version — I’m very into tying my own tie, I went to an all-girls’ school growing up and did it every day in the winter — or a pre-tied one.  So what, dear friends, is your favourite stock tie knot type?

Folded over in the center?

This variety that also seems to act as a sports bra?