Since XC on Sunday, Murray’s been a bit pooped.

As have his friends.

So we had no work yesterday, just liniment, and a light ride today.  Unfortunately, he also seems a bit sore and a touch lame (could be anything — stone bruise, abscess, whatever, don’t panic Nicole), so I called off the ride in favor of a bit of a massage instead.  Murray did lots of licking and chewing and yawning while I was gently massaging his back and hind quarters, which makes me hopeful that it did, in fact, help.

Tomorrow I leave for Italy for a few days, so he’ll get some light rides with one of the teenagers he adores.

This week I rode another baby noodle, this time a big six year old who was a stallion as of January 27th!  Ronin is my friend M’s project horse and he’s a big hunk of gorgeous.

This particular big hunk of gorgeous is also quite wide around, and appears to be just a tad downhill.  I don’t have a conformation shot of him, but trust me when I say his withers are below his croup.  However, he doesn’t ride like it at all.  He is stealth uphill, much like Murray is stealth downhill (he has big ol’ withers but his neck has a very downhill attachment).  Because Ronin is so wide, I can’t manhandle him around with my legs like I could with Murray as a baby, or more recently baby Eclipse, so steering him was an adventure.  However, he’s really game, really smart (already started to learn about half halts and regulating his own pace), and Alana has trained big horses like him before, so she will know what to do.

I also had another ride on Eclipse this week, though it was mostly a desensitization/lunging session.  I pulled him out right before feeding, and he absolutely lost it when he realized that everyone was being fed without him.  I persevered through his cries, let him lunge himself a bit, then tacked him up and walked around the arena once, got off, and stuffed him with carrots and turned him back out.  Such a hard lesson for baby horses, but an important one.  When I return, I’ll play with him some more.

Leaving you with my new absolute most favourite picture of Murray and me ever.  Taken by the amazing Sheila Stenger (THANK YOU), of us jumping out of the water at Camelot this weekend.  HE IS REALLY TURNING INTO AN EVENTER! 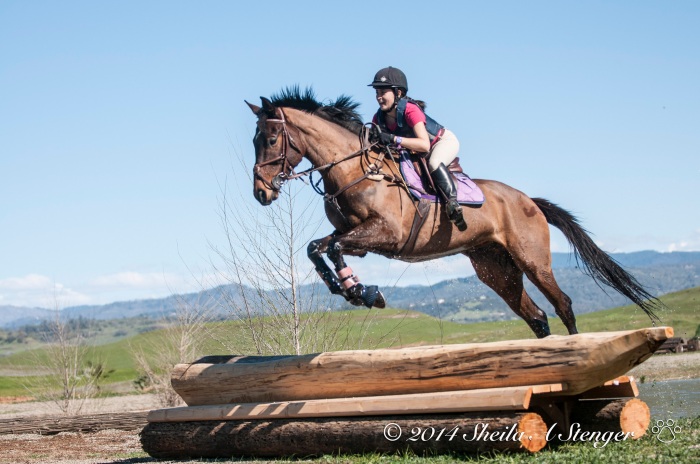 Water splashes. Good knees. Not ugly form. Bright background! SO MUCH LOVE. Many thanks Sheila!!

Edited to add: I know most of you are Ogilvys but I am an EcoGold!! Enjoy 25% off EcoGold until March first for their 25 year anniversary. I love (LOVE) their pads and will definitely be taking advantage of this!!