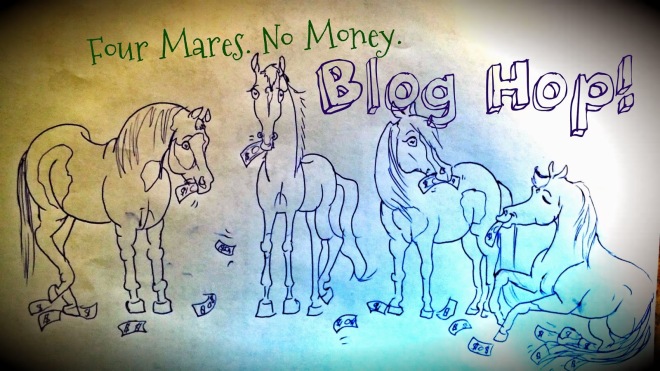 HollyBully over at Four Mares, No Money asks: What has been the most fearful moment you have ever experienced with a horse?

My most fearful moments with horses are pretty standard.  The first year I was riding with my trainer, she asked if I wanted to exercise Aught, another boarder’s 15 year old OTTB who needed to get out.  He was lovely the first time I rode, but the second time the other rider exercising him had changed his bit, and he decided all the puddles in the arena required LEAPING over!!  This turned into a bit of a flat out gallop, where every time I got him back under control we would come upon another puddle.  I made the choice to bail, and he immediately stopped and looked at me all “what are you doing on the ground?”

The other big scary one was this year when we were clipping Murray.  He was having a terrible day already, and after we got the twitch on him he went kinda catatonic (twitches work almost too well on him).  His right hindquarter was leaning against a corner, hoof propped up, and in his semi-catatonic state his front legs were starting to buckle — his balance was seriously off.  His knee finally bent properly and as his face dropped towards the ground he terrified himself, and reared so high.  Seriously, I didn’t know this horse was that tall.  He did nothing when he came back down, but the fraction of a second involving his “fall” and rear knocked the clipper to the side (fortunately) and left my heart pounding.

Both of these things were scary, there’s no doubt.  But I have to say, in terms of legitimate fear, my scary experiences with horses rank low.  This is in no way because I’m so experienced around horses or such a good rider that I have nothing left to fear (that would be really stupid), but simply because I’ve had way, way scarier experiences in my life.

Like in Kenya.  When I walked around on foot in Kenya.  On foot, in the bush, in a wildlife preserve. Where I saw lions at least twice a week.  Yet the lions were so not what scared me the most (though I did have one poop-your-pants moment with a lion). 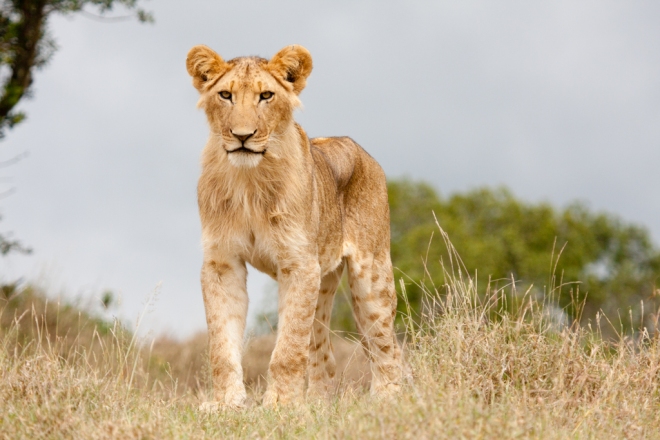 Worth being scared of.

On Hallowe’en of 2012 I was doing my standard behavioral observation route walking in the visitor area of the chimpanzee sanctuary I worked at, though it was closed to visitors at the time and I was alone there.  The visitor area included a small “cutout” into the chimp enclosure that was fenced just for the visitors, imagine a small rectangle inside a really big (1 square kilometer) square enclosure.  Anyway, I was in this visitor area, and had walked down a fenceline that was about 150 meters long, and had gotten to the corner.  I hadn’t seen any chimps yet, but that wasn’t particularly surprising, it was warm and they were usually resting during the heat of the day.

I hit the inside corner, and looked into the enclosure to see two chimps meandering down towards me.  I stopped to take some data, and turned to the right after I did so.  What I saw there was what terrified me.  The rest of the group of chimps, all 21 of them, were sitting in the shade not 20 meters down the fence, and Alley, the escape artist extraordinaire was sitting on two logs that she had propped up against the electric fence and working on opening up a hole with a third stick.  The two logs were dragging some wires down, and Alley was using a stick to twist together the wires at her eye-level so that a hole was opening up in front of her.  As I watched, she twisted one more time and the hole got bigger.  Alley could easily have jumped through that hole, but her fear of the electricity (that fence was HOT, I accidentally touched it several times) must have compelled her to open it further.

This was a practice run.

I had two choices.  I could pass the chimps and their giant hole and jump in the river just 30 meters away — my first instinct given how open the fence was — or run back the way I came and try to make it to my car before the chimps did.  My car was half a mile away.  On the one hand, the chimps were guaranteed not to go into the river.  Of course, the river had hippos.  And someone saw a crocodile there once.  And there was always the possibility that seeing me pass the hole would compel the chimps to either jump out sooner, or make a grab at me.  And my equipment was NOT waterproof — and it was heavy.  There was zero chance I could run faster than a chimp, but running seemed like my best choice.  I decided to run.

I immediately called the head of the chimp sanctuary, and told the volunteer I had with me to go back the way we came.  Oh, yes, I had a volunteer with me.  A completely inexperienced twenty year old with zero common sense.  “Run” I told her, while the phone rang. “RUN!!”

On the phone, I screamed at the head of the sanctuary when he answered. “The chimps are escaping right now.”

“What?” he responded, confused.

“ALLEY MADE A HOLE IN THE WALKWAY AND THE CHIMPS ARE ESCAPING RIGHT NOW.”

“Okay we are coming! You run away!”

“I AM RUNNING!” I yelled as I hauled ass.

Please don’t bite me with those.

I ran like I have never run before.  I was carrying close to 20 pounds of equipment and I didn’t drop any of it (though my water bottle did bounce out of the pocket of my backpack in my flight).  I ran past my lungs burning and my thighs screaming.  My assistant stopped running and started walking and looking behind her.  I screamed at her and kept running — damned if I would get caught.  Every rustle of a bush beside me was Ndaronse ready to leap on me.  Every creaking tree branch was Ali Kaka climbing above me.  Somehow I made it back to the door of the visitor area — only about 200 meters — and I slammed and latched the door behind me (once slowpoke was through).  That wouldn’t stop the chimps for long, but it would stop them for a second.  (This answers my age-old horror story conundrum: do you pause to close the doors when being chased? Apparently yes.)  Then I ran the rest of the way to my car, jumped in, and started it up, and drove over to where my stupid volunteer tail was barely jogging back up to me.

Instead of just driving away, I took a back road back to the chimps night house.  One of the caregivers was there unloading the week’s groceries that had been picked up that day, and the caregiver that had been on duty was walking up the fenceline to check the enclosure for safety before the visitors started to arrive in 20 minutes or so.  Through my binoculars you could clearly see the logs Alley had propped up on the fence, but it wasn’t clear if she was still there or not.  Stephen started yelling at the chimps to come back to the night house, calling “CHOKULA CHOKULA CHOKULA” (food!).  I phoned the caregiver walking up the fence to warn him, and by the time he arrived at the visitor area the rest of the caregivers had gotten there by car from their lunch break. 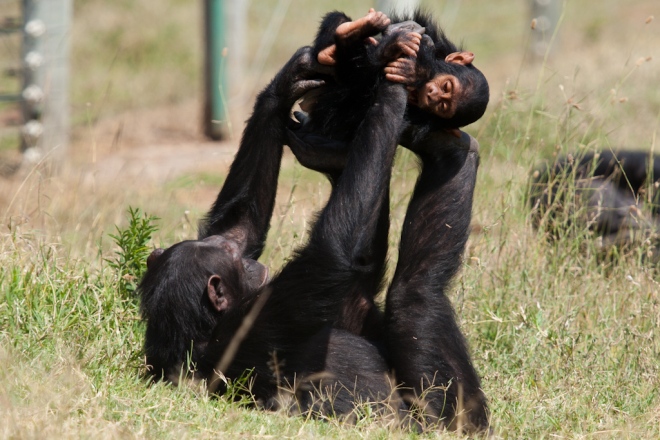 Probably the only chimp who WOULDN’T have beaten me up… and I mean the big one, not the little one. The baby was mean.

The caregivers swarmed the visitors area, and I was pretty sure I saw at least one chimp jump back through the hole (I wasn’t using my binos at the time).  They kept the visitor area closed for the afternoon, my water bottle and cap were retrieved unscathed, and I got several big hugs from the caregivers who were extremely glad to see me safe after the whole ordeal was done with.

Sometime, I’ll tell you about the lion. That one is better, possibly, and much more like Jurassic Park.