This weekend was a pretty freaking good one.  Saturday I worked on data analysis with some labmates and had a pretty good time, surprisingly, helped others (what! I knew enough about data analysis to be helpful?!) and was helped in turn.  So that was pretty awesome.  Rode Murray briefly, just asking him to stretch down into the contact and move out at the trot at the same time, which is soooo haaaaarrrrdddd, and did lots of walking poles to limber up his back and stretch him out for XC Sunday.  Then I came home and did no writing which was very naughty.

THEN WE WENT CROSS COUNTRY AND IT WAS SOO COOOL.

We went to Camelot Equestrian Park, which I have spoken about before.  It’s a super fun, huuuuuuuuuuuuuuge, and this year they are holding their first ever rated event and so are revamping all their jumps and footing.  Despite being in a drier area of California (though they did get lots of rain this year), they have do an amazing job with their footing and put tons of care into it.  This weekend it was seriously like riding on a cloud.  Even the loudest horses made absolutely no noise.

Training battering ram. All their jumps are Camelot themed!!

Literally the only downside to Camelot is that it’s a two hour drive away — and every other facility is further so whatever.  Everything else about them is so freaking fantastic I can’t even handle it.  They have pipe panel stalls available for you to keep your horse in for the included in the facility use fee.  They have like 500 miles of trails.  They have two stadium arenas.  They have two dressage courts with great sand and an awesome warm up that doubles as their long court when in times of need.

I digress.  Anyway.  Murray got to hang around in a paddock while the first group schooled, and then I took my time getting him ready.  He’s been on omeprazole for three days now, and I’ve not noticed a huge difference, but he certainly was very easy to tack up.  I’m not sure if that’s the changes I’ve made in my tack-up procedure, the fact that he got some time to relax after getting there, or what, but it was nice.  I was schooling in a beginner novice+ group with three friends.  I warned everybody that Murray and I may need to split off from the group because in the past he’s struggled with schooling in groups — he gets really confused and doesn’t take direction well, and then will go any direction but forward until literally one stride before a jump.  It’s not fun/the best/productive for horse or rider.

So we got out there and started schooling the water, and except for a few spooks thanks to some 15 mph winds, Murray was really solid.  We walked another horse through the water, and we started trotting and cantering and warming ourselves up.  My friend’s horse, who LOOOOVES him some XC, was pretty raring to go sp let out a few small bucks, and Murray seemed to take that as an indication that he, too, should bring out his best moves.

Coming down from a buck — devastated my photog didn’t get the full extension on this one.

One of the huge benefits of schooling with a group of adults is that everyone helps things run smoothly and communication is fluid.  We were all warmed up and through the water by the time Alana came over to get us started, and we promptly headed out to our warm up fences.  Murray takes warm up very seriously. 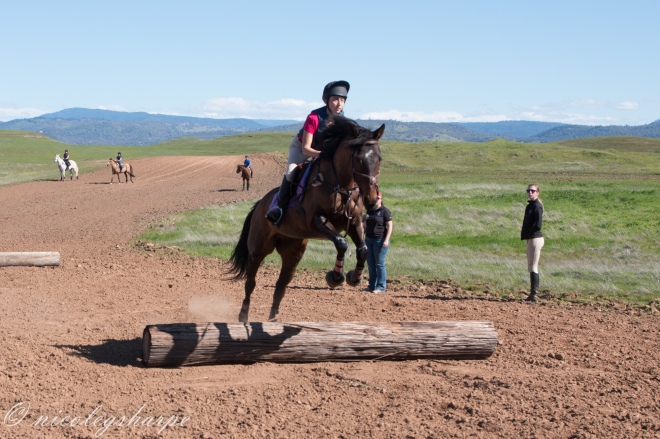 Though he got most of it out around the water, Murray was still a bit confused about the whole “group schooling” thing, and was a little chargy to the fences and very playful afterwards, so our first jumps were pretty ugly.  I was riding really defensively and I kept missing our spots and getting left behind, because Murray was taking the long ones (in stride with his gallop) and I wanted him to take the deeper one.  My defensive riding probably didn’t help the fact that he was kicking around on landing, so next time I will work hard to stay with him more and just bring him back after the fences with my body instead of my hands.  As you can imagine, this combo of charging + defensive riding resulted in just our best possible form ever. Anyway, we moved on, and Murray and I got into a better groove, and jumped this huge scary beginner novice “mouse house” (a table with holes in the front) which I have always been intimidated by.  It’s max height and width for beginner novice, and Camelot doesn’t really have a lot of super flat ground so all of the approaches are either uphill or downhill, and those holes in the bottom really draw your eyes in.  Murray, however, was not tripping.  Not tripping at all.  And I managed to get my body back under a bit more control. 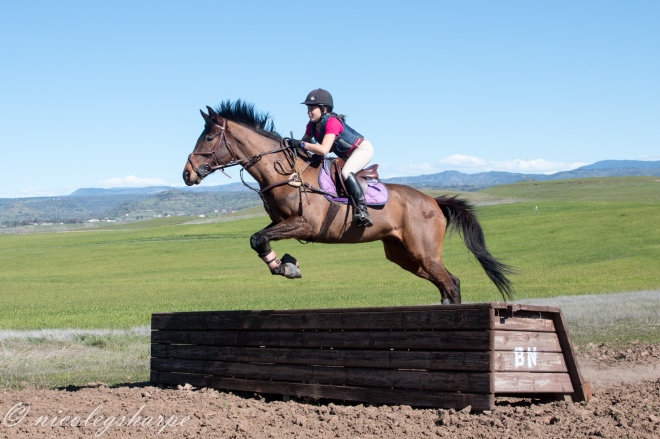 After the mouse house was a little roll-top like thing and we went straight to it without looking at it.  This was the first moment that I felt Murray hesitate at all headed towards one of the fences, and I just kept my leg on, and he got a deep spot, and it was great!  A couple of the other horses had a bit of a hesitation there as well, and we think it was because the landing isn’t visible from the front side, so they’re not sure what to expect.  It’s a very gentle downhill though, so it was all good.  We also did the dragon wall, which was one just river stones held in by rebar but is now being cemented over (probably for durability), both the BN and Novice side.  This was previously the site of Murray throwing himself on the ground and rolling, but I was smarter than him this time — there was no putting one’s head down today!

Our best form — no sarcasm — probably came when I biffed a novice coop-log thing, and Murray got too deep and actually brushed it.  Right before I came into it I had been thinking about what it feels like to ride forward without clinging and trying to describe it to you guys, and as we bore down on this thing I did the opposite and took my leg off.

We even did a canoe jump into the water and out of the water, which was super fun.  The jump wasn’t very big, and I think it’s one of the new beginner novice questions if you follow the new rules closely (I haven’t), but Murray was very forward to it and we didn’t struggle.  Then up the hill to the up and down banks.  This was the only place Murray really started to fuss a bit, pulling me off the track and back up towards his friends.  So I declined to do the bigger down bank until our steering got a little better.

We ended on a little loop with a fairly solid novice table with Nacho Libre faces painted on one side (probably actually knights helms), headed to a BN roll top, and then around to some railroad ties.  Murray handled the table and roll top beautifully, but took a rather long one to the railroad ties.

So sad you can’t see the nacho libre faces on this.

So we schooled the loop again and got much more reasonable jumps to each fence.  Alana called it there, and even though there were a few more fences I definitely could have jumped (and Murray even pulled towards them when we were going around a few times), it really was the better choice to let him be done before he got tired.  Since he was so, so good and schooled in a group (which has been impossible for us since last April), I knew it was really important for him to end on a very positive note and not feel tired out or pushed.  I think his sourness over group schooling was started by being really tired during an outing last year.

Overall, such a great confidence builder!  I’m always a little butterfly-y when I get out on XC and when Murray was all bleckaw with his legs I definitely got a little nervous.  But everything we jumped proved to me that he really DOES love what we’re doing, and that we really can do it.  Between now and our next schooling adventure, I really need to nail down my position a bit better, and get back to a place where I follow Murray more naturally over jumps even when he is being a little rushy.  Oh, and we rode in a snaffle again!  After the Hawley clinic I switched Murray’s loop gag back into a snaffle (just moved the rein attaachment) and he’s been doing great in it!  So I didn’t change it again today, and once again: perfect!  I could not have asked for a better horse out there today.  He was brave, game, and honest.  He saved my butt and he also listened to me, and everything felt easy.  It’s the best feeling.  THE BEST!! 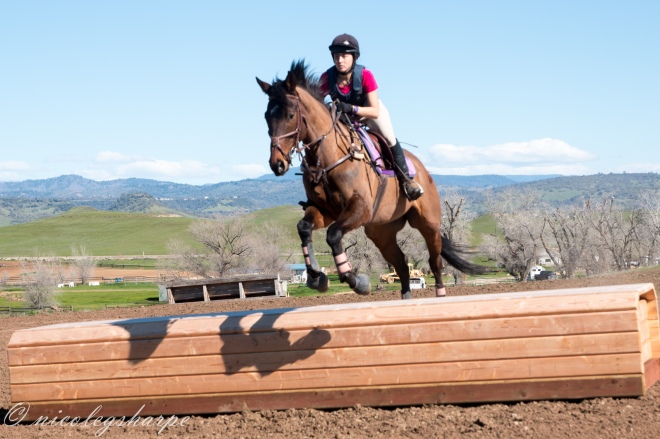 At the end of March, we’re returning to Camelot for a 3-day eventing camp (if you’re in the area and want to join, holler at me!) which is going to be an absolute blast!!  Oh, and Murray didn’t even sweat the whole time we were out — now, granted, it wasn’t very hot and there was a cooling wind, but he hardly even sweat UNDER his saddle.  So I know the next time he tells me that he’s too tired to do more dressage it’s a lie!!  Kid is fit as.