I haven’t been writing much about my riding lately, because I haven’t actually done a ton of riding.  At least, it certainly feels that way.  Last week Monday Murray’s knee was all swollen when he got off the trailer, and though he wasn’t lame I was worried about infection so I just lunged.  Tuesday his knee looked worse, I nearly cried, but he still wasn’t lame, hot, or painful, so I lunged once more.  Wednesday I had a light dressage ride, Thursday I … probably gave him the day off.  I don’t even know.  Anyway, the big swelling has gone down and it’s just localized to a kick mark at this point, so assistant trainer was right and it really was just stocking up.

Before last week, Murray and I had been working pretty seriously on getting some real engagement behind and lift through the withers with lunging and riding.  I think it’s working.  Murray’s been much more willing to stretch down into the contact at the walk and trot, and his canter work is really improving to the left (previously one of our biggest hurdles — crappy throughness in the left canter).  I took photos of Murray’s neck to compare them to August pics, but I honestly can’t see much of a difference.  There does appear to be muscle filling in between his neck and withers, which makes me happy.  Perhaps I’ll just blame the lack of neck on the back lighting. 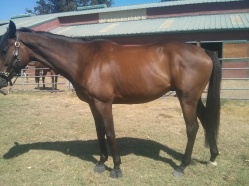 Anyway, Murray and I also had to have a bit of a come-to-jesus discussion two weeks ago, as he was extremely behind my leg and generally responding very poorly to my leg aids.  In an attempt to avoid dressage fights with him, Alana has me avoid using my whip as much as possible (though I still always carry it as insurance) right now, and for the most part Murray has been soft and compliant.  Only, recently he’s been really sticky on my legs, in particular against the wall, refusing to make a proper circle because once he gets next to a wall he’s definitely not leaving it again.  During this particular ride he also kept trying to rip the reins from my hands.  Eventually I got so sick of this that I just drove him forward with the whip and my leg, and a bucking fit the likes of which I’ve not ridden in quite a while ensued.  I actually felt myself levitate several inches out of my saddle at one point, and came down on Murray’s back rather gracelessly.  After that he was much more compliant, but somehow the willingness to stretch down was gone.  I’m not sure if I literally beat him into last year(‘s mentality) or what, but he seems to have gotten over it now.

Anyway!  Murray came with me to my trainer’s place for housesitting this weekend, so of the four days Murray and I did hill work three days in a row (err, on the first day I lost my trainer’s dog while I was tacking Murray up so nixed the ride, fortunately the dog reappeared 30 minutes later clearly very pleased with his visit to the creek).  I did one faux-dressage test in the mini-arena, which Murray performed fantastically through, even with cyclists buzzing past us on the road, one serious conditioning day, and another day of slow and steady walking up and down hills with just a little trotting and cantering.  The property isn’t giant, but it has a couple of different slopes that get the job done.

Tuesday we had a little jump lesson, and I was very saddened that the Hawley course was gone.  I had really been looking forward to jumping the faux-coffin.  However, assistant trainer did not disappoint this week with a couple of interesting questions in the course!

Everything was fairly straight forward at first, green to blue-brown oxer in four, navy to skinny brown oxer (which I got a refusal to the first time, more on that in a second), and the one stride.  Then suddenly it was all “take the skinny brown oxer to the blue and brown oxer, get the angle” and “rollback right off the rail to the pink flowers and then turn right again” and I was like whaaaat.  Murray performed admirably however, and really rocked back onto his haunches for the rollbacks — especially that nutty circle around the flowers.  We had one rail which was kindof messy riding on my part, but also (apparently) Murray forgetting to lift up his own feet.

The two skinnies plagued us in the beginning.  The brown skinny oxer had dressage letters below it, and Murray gave them a hard look when I rode past it the first time, so as we approached it to jump it the first time he stopped — though quite far out.  I could almost tell he was going to do this and I got a little eager and ahead of him, so the stop was really my fault.  If I had just remembered to sit tall and stay quiet, I’m sure he would have gone right off.  The same thing happened to the blue sharks tooth, though to a lesser degree.  I didn’t get too far ahead of him, but I also didn’t stay upright and support him to the base, so he refused early again.  I just let him look at it, and once I turned around he took three immediate canter strides to the fence.

I’ve been working on getting my position back properly, as it took a vacation over Christmas and hasn’t come back since.  Previously, when I two-pointed around the arena, I could feel my heels deep at the girth and I was performing some kind of miraculous feat of strength as I hovered above the saddle.  Then when jumps came up, Murray just lifted me up and my body folded like beautiful origami and it was all amazing and rainbows and glitterfarts.  Not quite back to sparkling flatus, but I’m working on getting back there.  It was better there.

New baby horse! I’m asking for nothing here, this is just him being himself!

I also got to have some fun with a new baby horse today!  Not entirely new, as he’s been at the barn for several months, but little Eclipse was retired from the track last year and put out to pasture to grow.  Riding him feels like riding a jumper pony I know, only slightly taller (seriously he is SO narrow), but he has a lot of try and was very earnest.  His tinyness was to my advantage, of course, since Alana wanted to put someone little on him because of it.  One of my friends lunged him first and he got out an absolutely ENORMOUS buck, so I’m glad that happened before I got on!

Eclipse is going to be in training for a few more months while his owner figures out what the plan is for him.  So I’m sure there will be more pony rides to report about later!  I seriously forgot what riding baby babies is like.  Noodly, poor steering, not so great with the turning — it’s so cute!  And it makes me love Murray even more.

Sunday we go XC schooling for the first time this year.  Super excited!!